Azerbaijani MoD: Special attention is paid to the training of young soldiers in the Azerbaijan Army - VIDEO

New military unit starts to operate on border with Armenia

"Azerbaijan has long been home to many different ethnic groups. One such group is the Mountain Jews, descendants of Jewish people who migrated from Persia to the Caucus mountains hundreds of years ago.

Krasnaya Sloboda is a Jewish settlement in the city of Quba, located on the eastern slopes of the Greater Caucasus. It stands out from other provincial Azerbaijani settlements with its unique architectural style. The people who live there honour and preserve their centuries-old tradition

The Museum of Mountain Jews opened there just last year to shine a light on this one-of-a-kind community, their traditions and culture, keeping them safe for generations to come.

Igor Shaulov is the director of the museum. He tells us that "the Museum of the History of Mountain Jews is the only one in the world. It includes documents, domestic items and artifacts. This museum is devoted to the history and culture, past and present, of the Mountain Jews. It reflects a high degree of interaction and mutual respect between Jewish and Azerbaijani people".

Krasnaya Sloboda is believed to be the world's only all-Jewish town outside Israel and the United States, with a population of around three and half thousand people. 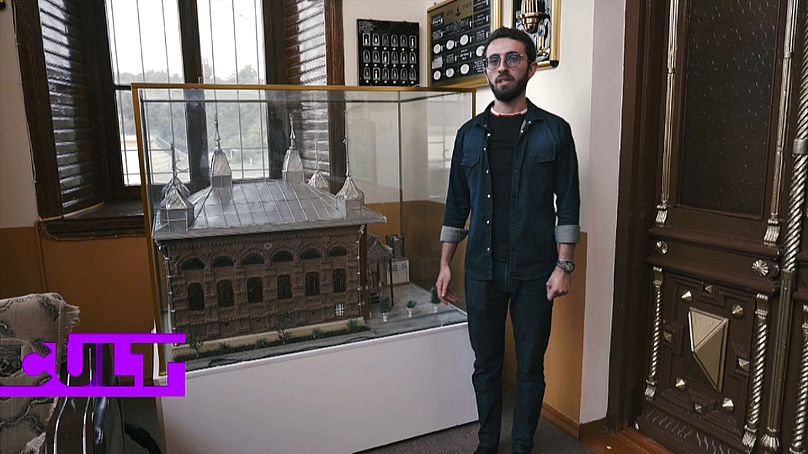 Naum Niftaliyev is a guide at the museum. He says that the "sheshkombara" was built in 1888, "but, unfortunately, during Soviet times, it was used as a carpet weaving factory, because religion was prohibited. After the collapse of the USSR, it was renovated and now functions, once again, as a synagogue."

For some young people, the 1990s was a difficult decade. Many were forced to leave their community in search of work after the collapse of the Soviet Union. But now, thanks partly to Orthodox Jewish outreach groups, young people can pray in the vibrant local synagogue and dozens are enrolled in the Yeshiva.

While Islam is the main religion in Azerbaijan, Judaism and other faiths are also practiced.

A local Islamic Scholar, Hemdulla Denyarov, tells us that "for many centuries Jews and Muslims have been living together in Quba. It would be great if such a neighborhood were taken as a basis all over the world".

Table Mountain fire 'burns out of control' in Cape Town

Video footage of the Saybali village of Aghdam region - VIDEO

Video footage of the Tarovlu village of the Gubadli region - VIDEO

Azerbaijani civilian stepped on mine in Aghdam: left leg amputated

After criticism, Biden says he will raise U.S. cap on refugee admissions

At least 14 rebels killed in fighting with Colombian army

Putin discussed assassination attempt on Lukashenko prepared by US with Biden

Lukashenko reveals group that plotted to assassinate him taken in custody

Video footage of the Saybali village of Aghdam region - VIDEO

Video footage of the Tarovlu village of the Gubadli region - VIDEO

Photo of woman, who learnt death of her close one as a result of shelling on Ganja, became “Media photo of the year” in Turkey - VIDEO

The Guardian must refute the defamatory article about New Azerbaijan Party

President Ilham Aliyev: The liberation of territories will be additional opportunities