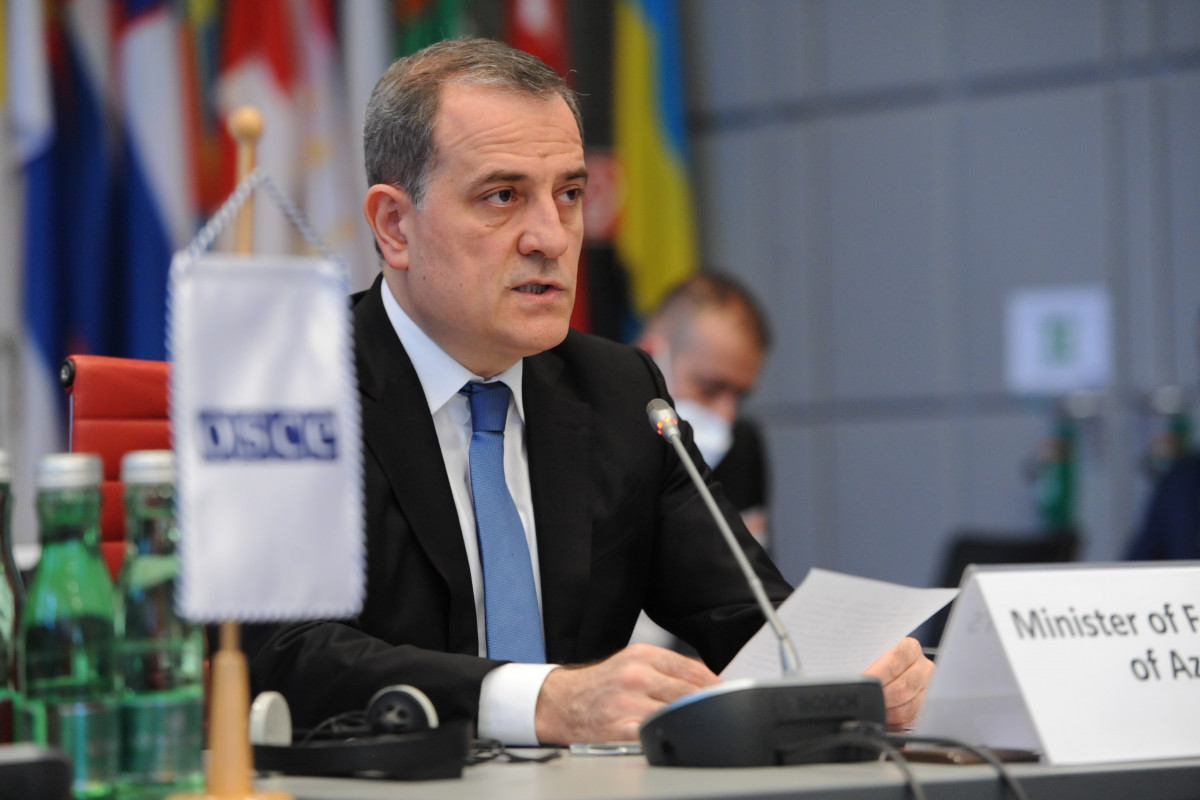 Minister of Foreign Affairs of the Republic of Azerbaijan Jeyhun Bayramov has delivered a speech at the opening meeting of the OSCE Forum for Security Cooperation (FSC), held under the chairmanship of Azerbaijan, on January 19, 2022, APA reports.

The speech reads: "I have a pleasure to inaugurate the Chairmanship of Azerbaijan in the Forum for Security Cooperation (FSC) in the first trimester of 2022 and present our Chairmanship program. Hopefully, this Program will provide an effective guidance to the discussions among the participating States in this Forum in the next four months.

Let me thank our predecessor, Austria, for its leadership and competent FSC Chairmanship in the past trimester. I welcome Belarus to the FSC Troika.

Azerbaijan took the helm of the FSC for the first time in 17 years. Since we last chaired the Forum in 2005, a number of developments, including in the politico-military domain, have taken place, complicating the overall security environment in the OSCE region. It became characterized more and more by distrust and lack of confidence rather than cooperation as it was envisioned. Rivalry among politico-military blocks continued to grow and manifest itself detrimentally on the work within the OSCE. These developments put at risk the indivisibility of security underpinned in fundamental OSCE documents. Pursuance of comprehensive and co-operative security – a unique asset of our Organization – has been challenged.

What has not changed, however, is the basis for our cooperation both within the OSCE as a whole and the FSC in particular. That is unconditional respect for fundamental norms, principles and commitments enshrined in the core OSCE documents, starting from the Helsinki Final Act, in particular respect for the sovereignty, territorial integrity and inviolability of internationally recognized borders of States.

The outlook and approach of Azerbaijan on the cooperation within the OSCE, including on the topics covered by the FSC, has been largely shaped by our experience in the last nearly three decades. As a result of blatant violations of the core principles of inter-State conduct, our sovereignty, territorial integrity and internationally recognized borders were undermined, before being restored following the counter-offensive operation of our armed forces in the autumn of 2020. Thus, we are of the strong view that violations of foundational OSCE principles and commitments pose the most adverse threats and challenges to overall security environment in the OSCE region and jeopardize the very foundation for our cooperation. Azerbaijan remains unwavering in its unequivocal support to these principles and proceeds from an understanding that it should be our common highest endeavor to uphold these principles and ensure strict compliance with them whenever they are threatened or challenged.

Thus, our major task and cross-cutting priority during FSC Chairmanship will be to uphold and strengthen compliance with fundamental OSCE principles along with enhancing implementation in good faith of politico-military commitments. We are deeply convinced that only such an approach by participating States could restore trust and confidence among them, reinvigorate the application of politico-military instruments, enhance predictability and transparency, avoid threat multiplication effects and aggravation of threat perceptions, and by so doing underpin peace and stability in the OSCE region.

In our Chairmanship agenda we aimed to strike a balance between established and relatively new topics within the FSC, which address a spectrum of issues of high importance and relevance to the Organization. To this end, we included in our Chairmanship program the following Security Dialogues.

Azerbaijan will keep high on its Chairmanship agenda the issue of SALW and SCA, one of the core FSC topics. We regard our FSC Chairmanship as an opportunity to further contribute to the full and effective implementation of these commitments by participating States. With this in mind, we will dedicate two Security Dialogues to different aspects of SALW and SCA. One will cover the topic in general, focusing on the implementation of relevant OSCE commitments and lessons learned. The other Security Dialogue will focus on the issue of mine action.

OSCE participating States have undertaken a number of commitments on SALW and conventional ammunition, including in the area of mine action. Practical assistance mechanism is of particular value in this regard, as it can play an essential role in addressing the negative repercussions of SALW and SCA related threats on security and stability, as well as on the safety of populations in participating States. Implementation of assistance projects could produce effective practical results and have soonest positive impact. Thus, it should be our collective resolve to ensure that SALW and SCA commitments on practical assistance mechanism are being implemented in an impartial and de-politicized manner. Speaking from the perspective of the OSCE’s comprehensive and cross-dimensional concept of security, realization of practical assistance projects is also of primary importance for the implementation of our commitments in other dimensions of security, such as facilitating the return of internally displaced persons (IDPs) to their homes in safety and in dignity.

Being a non-aligned OSCE participating State, Azerbaijan has always regarded the OSCE as a major pillar of the pan-European security architecture and valued the Organization’s role as indispensable for the realization of the vision for Europe without dividing lines and zones of influence. Amidst the continuing erosion of multilateralism and growing rivalry among politico-military blocks, the indivisibility of security underpinned in fundamental OSCE documents needs to be upheld. Thus, one of our Security Dialogues will be dedicated to the place and role of countries that do not belong to any politico-military alliance in European security architecture, as well as their approach and experience in contributing to security and stability in the OSCE area.

The next Security Dialogue will be devoted to countering terrorism in all its forms and manifestations. Based on its unique comprehensive concept of security, the OSCE is well-suited to combating and preventing terrorism through a holistic approach, including addressing financing of terrorism, the phenomenon of foreign terrorist fighters (FTFs), as well as the linkages between terrorism, separatism and violent extremism, organized crime, corruption, money laundering and other illicit activities. The OSCE participating States have undertaken a number of wide ranging commitments in this field, starting from the 2001 Bucharest Plan of Action, which remains a founding and guiding document of the OSCE in the area of counter-terrorism. Identifying and addressing structural root causes of terrorism and triggers for increased radicalization in the OSCE region is essential. Of no less importance is strengthening of the cohesion of our societies and promotion of education, inclusive societies and peaceful co-existence, religious tolerance and mutual understanding, inter-cultural and inter-religious dialogue.

Gender equality, equal and balanced participation of women in social and public life is among the priorities of our government’s policies. In the same vein, Azerbaijan considers advancement of women as an important element of the maintenance of international peace and security, and continues to be a proponent of cross-dimensional approach on women, peace and security agenda. With this in mind, together with the Polish Chairmanship-in-Office, we will organize a joint FSC-PC meeting on United Nations Security Council Resolution 1325. It is important to use this opportunity to contribute to the implementation of UNSCR 1325 and follow-up resolutions in all their aspects.

Our next Security Dialogue will cover the issue of conventional arms control and confidence and security building measures (CSBMs). Based on its experience, Azerbaijan is well aware of threats and challenges existing in this sphere. In the past nearly three decades, we witnessed deliberate disregard and evasion of all applicable arms control and CSBMs regimes in a wrongful quest to consolidate the status-quo of occupation of our territories. Proceeding from this experience, we are convinced that the implementation of arms control and CSBMs commitments under existing regimes both in letter and spirit could indeed provide a significant contribution to peace, security and stability in the OSCE region. At the same time, the primary purpose of these regimes should be to sustain peace and stability, giving effect and expression to our shared foundational principles and commitments laid down first and foremost in the Helsinki Final Act. Only such an approach could yield intended outcomes.

The start and a large part of my address today dwelled upon threats and challenges that we face. I wish to conclude on a more positive note, underlining our final Security Dialogue, which will be dedicated to post-conflict rehabilitation and will draw on the lessons in the OSCE region. The OSCE’s conflict cycle toolbox provides a basis for the Organization’s engagement in post-conflict rehabilitation activities in a broad and comprehensive manner, extending, inter alia, to the politico-military aspects of security. Participating States adopted a number of commitments reflecting their will to develop relevant capabilities with a view to contribute to long-term and sustainable post-conflict rehabilitation. Some of the elements of post-conflict rehabilitation resonate directly with the work of the FSC, such as assistance in demilitarization, destruction and disposal of SALW and conventional ammunition, including demining. The Organization has gained experience in post-conflict rehabilitation since the early 1990s and there is necessity to further develop and ensure discharge of the OSCE’s capabilities at this phase of conflict cycle tailored to the specific needs of each post-conflict situation. Thus, amidst the current threats and challenges to our security and stability, it is a high time to engage in meaningful and frank discussions drawing on the experience across the OSCE region in order to contribute to its peaceful future.

In closing, I would like to reiterate that during our Chairmanship we are looking forward to work together with other participating States with a view of promoting and enhancing the implementation of our shared politico-military commitments, while ensuring respect for foundational principles that our Organization rests on. Let me express our readiness to cooperate with the Polish OSCE Chairmanship as well as the members of the FSC Troika – Austria and Belarus – in our endeavor to strengthen the work of the FSC and provide a contribution to military security and stability in the OSCE."