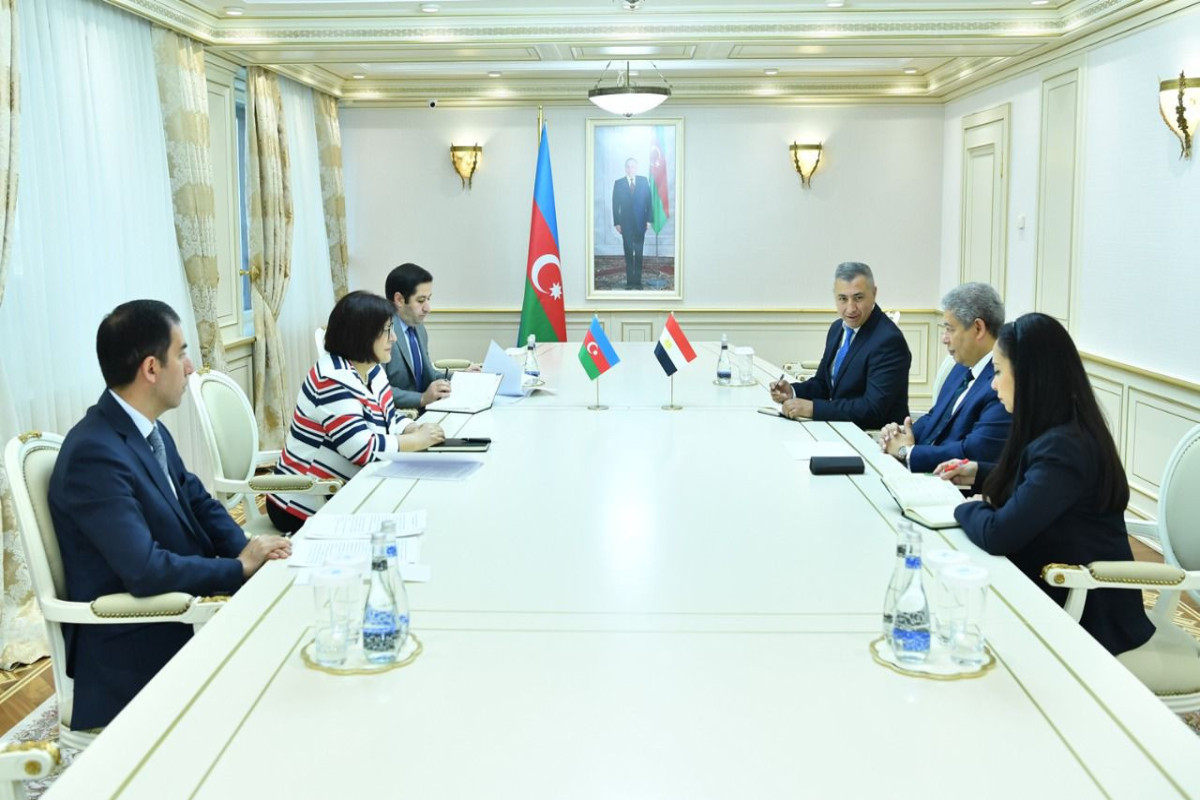 There was a meeting on 9 June of Chair of the Milli Majlis Sahiba Gafarova and the Ambassador of the Arab Republic of Egypt to Azerbaijan Hisham Mohamed Nagy Abdel Hamid, Press and Public Relations Department of Azerbaijani Parliament told APA.

The Chair of the Milli Majlis greeted the Ambassador, wished him success in the new tenure and said she was certain that the Azerbaijani-Egyptian relations were going to grow further during his diplomatic mission in our country.

Azerbaijan and Egypt are the friendly states and the status of their current relations is gratifying, according to Sahiba Gafarova who also mentioned the thirtieth anniversary of the bilateral diplomatic relations being due this year. Our countries have spent those decades to strike up close interaction in many areas as well as within such organisations as the UN, the Organisation of Islamic Co-operation and the Non-Aligned Movement.

The rise in the Azerbaijani-Egyptian economic, cultural, educational and tourism connexions and other topics were touched upon as the conversation went on.

According to Madame Speaker, the inter-parliamentary relations make a substantial component of the bilateral and multilateral links between our states and, saying this, one should also commend the two sides’ parliamentary friendship groups on their work. Incidentally, there are fine opportunities to make the linkage between our legislative assemblies firmer just now.

The Speaker of the Milli Majlis went on to talk about the significance of contacts and reciprocal visits in terms of bringing our nations closer together. She told the Ambassador of the operations of the Non-Aligned Movement’s Parliamentary Network that had been established at the suggestion of Azerbaijan.

As she spoke about Azerbaijan’s remarkable victory in the 44-day Patriotic War then, Sahiba Gafarova remarked that that victory had sprouted new realia in the region and emphasised Azerbaijan’s commitment to sustainable peace, stability and normalisation of relations. Which is why a number of offers had been put to Armenia and it is to be believed that a peace accord between these two states will be signed before long to come as a boost to the progress of all the countries of the region.

The Ambassador of the Arab Republic of Egypt Hisham Mohamed Nagy Abdel Hamid thanked for the congratulations on the beginning of his diplomatic mission, witnessed his intention to work hard on the continued development of our relations and congratulated the Azerbaijani side on the successful chairmanship of the Non-Aligned Movement as well as on the inception of the NAM Parliamentary Network.

According to Mr Nagy, he had travelled to the de-occupied territories of Azerbaijan and seen the truth with his own eyes. Egyptian companies, too, intend to invest in the liberated Azerbaijani lands, according to the Egyptian ambassador.

The meeting drew on; there was an exchange of opinions about other topics of shared interest then.