Sergei Markov: “In all cases, Armenia bears responsibility of partisan activity in Karabakh” 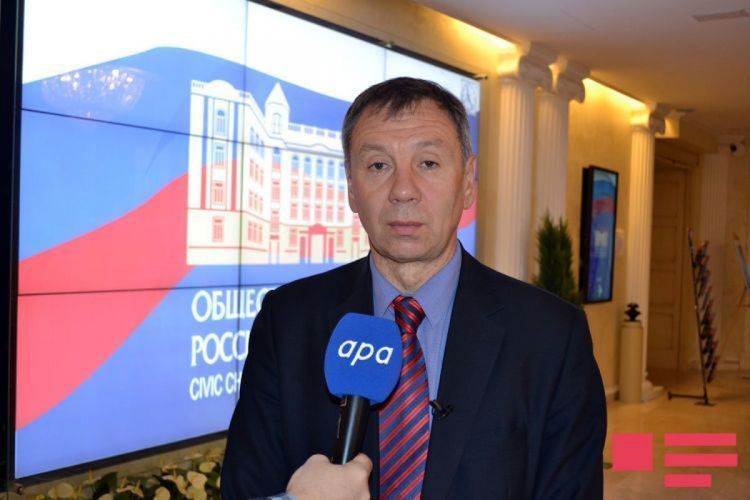 “The demonstration of the flag of the so-called regime in Nagorno-Karabakh in the website of the Russian Defence Ministry is unacceptable. Because the name of this so-called regime has not been mentioned in agreement on a ceasefire, in any document,” said Director of the Russian Institute for Political Studies, well-known political scientist Sergei Markov in his interview with APA’s Moscow correspondent.

“There is no note on the status in the trilateral statement dated November 10 regarding Nagorno-Karabakh. However, there are found views regarding the future statuses of Nagorno Karabak in the statements of Russian officials. The flag of the separatist regime in Karabakh is being demonstrated on the website of the Russian Ministry of Defence. Responding to the question “What is the aim of Russian peacekeepers by doing this?”, Markov said: “The issue of the status of Nagorno-Karabakh will be the most serious obstacle for the future. Today, a big gap exists between the concepts of Azerbaijan and Armenia regarding the status. Azerbaijan suggests a status regarding Nagorno-Karabakh. It is a simple status of province of Azerbaijan’s region. Azerbaijan states that it will provide equal rights of Armenian residents of the region at the maximum level like other Azerbaijani citizens. However, Armenian leadership is in favor of maintenance of the previous status of Nagorno-Karabakh. Yerevan wants remain of “unrecognized Republic”, which consisted of just Armenians and integrated to monoethnic Armenia through the Lachin corridor, and protection of the whole process by Russian peacekeepers. There is a great distance between these two notions. I think that future negotiations should provide a phased switch to the new status of Nagorno-Karabakh. This status should provide full integration of Nagorno-Karabakh to Azerbaijan’s political, state, and economic atmosphere as a region. Basic principles of the United Nations also state it. But passing through the way is very difficult. We know that Azerbaijan does not want a new war in Nagorno-Karabakh. Azerbaijan prefers completely opening communications and integration of Armenians into the country.

Russian political expert has noted that Armenian’s attack to the Azerbaijani servicemen in Khojavend region is a blow to the ceasefire agreement: “The attack of Armenian armed forces to Azerbaijani servicemen breaks the spirit of peace in the Nagorno-Karabakh. I think that this provocation is not related to Pashinyan’s Government. Because, official Yerevan well understands that violation of the ceasefire will result of winner Azerbaijani Army continuing its combat activities and taking control of the remaining territories. This catastrophe will lead to Armenian people to hate Pashinyan more. I think that either the ultranationalist organizations, Dashnaktsutyun, Sasna Tsrer, or some Armenian groups that occupied Nagorno-Karabakh and the surrounding regions in the early 1990s and protest today are violating the ceasefire. It is possible that there is some connection between those Armenian group and ultranationalists. In all cases Armenia bears the responsibility of such partisan activity. Armenia should either guarantee that such cases will not happen, or conduct a trilateral military operation against these groups, the organizers of acts of diversion. Russian, Azerbaijani and Armenian military units should participate in the operation against Armenian saboteurs in order to protect the safety of everyone in the region. If currently, attacts are conducted only against Azerbaijani side, then first of all the safety of Azerbaijani servicemen and Azerbaijani civilians who will return there in the future should be ensured. It is very important. We should think about it in advance.”