Azerbaijani FM: “I hope we will open new phase of substantive negotiations in Bratislava” 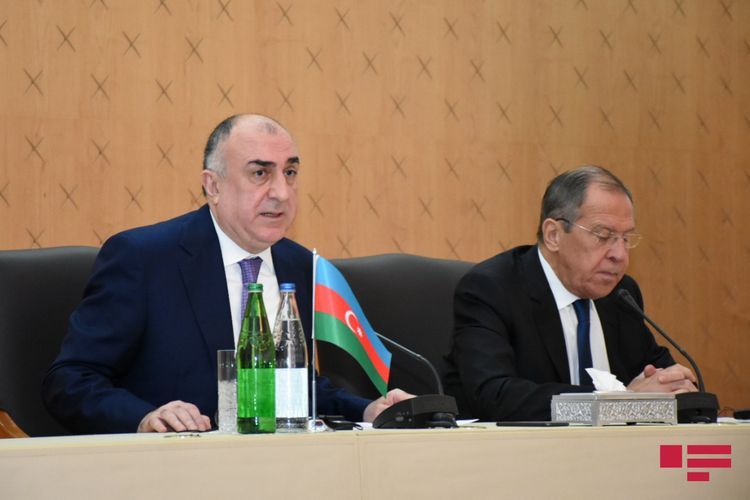 ”My Armenian counterpart has stated he will discuss the issues of status of Nagorno Garabagh and security in the meeting with me Bratislava tomorrow. The principal approach related to the status is clear. The points in question are the whole population of Nagorno Garabagh, the return of internally displaced people to their normal lives. We think if there is progress, let it be not under a gun tube, but in independent form, at the expense of mutual contacts. Only in this case reliance environment will be created,” said Sergey Lavrov, Foreign Minister of the Russian Federation, at a press conference in Baku following a meeting with the Foreign Minister Republic of Azerbaijan, Elmar Mammadyarov, APA reports.

I would like to reiterate that firstly, the armed forces should return to barracks. Thereby the creation of a trust environment can be achieved rapidly. Security is important. While the Armenian side brings to the forefront the security of the Armenian population of Garabagh, the Azerbaijani side will always raise the issue of security of Azerbaijani population of Nagorno Garabagh after the IDPs return to their places of residence – this will happen anyway – sooner or later – they will return firstly to the 5 regions, later on – to 7 regions and finally, when relevant opportunities are available, to Nagorno Garabagh. A report is needed for this purpose. In this regard, we have appealed to the co-chairs so that they would develop a special report in order to clearly evaluate the situation. There should be an accurate evaluation regarding the procedure of the solution of the security issues. And for this purpose, it is important to conduct serious, substantive and thematic negotiations. I hope that tomorrow in Bratislava we will open just a new phase of the thematic negotiations”.

Note that on December 4, a meeting will be held in the Slovakian capital Bratislava between Azerbaijani and Armenian foreign ministers Elmar Mammadyarov and Zohrab Mnatsakanyan."