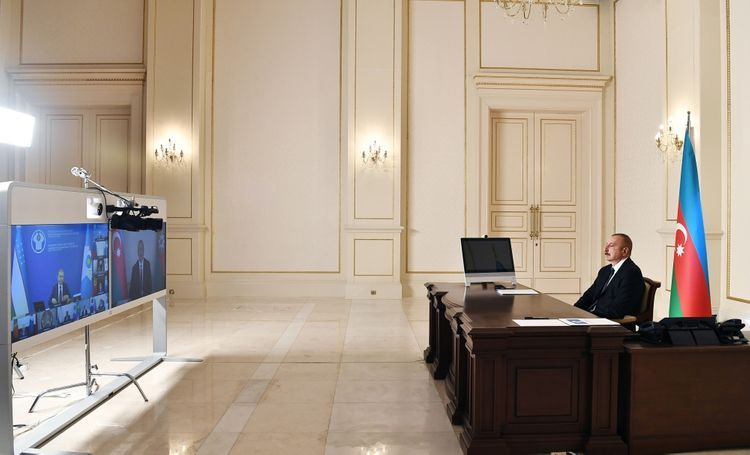 “Armenian leadership did its utmost for disrupting the negotiation process and maintain status quo,” said Azerbaijani President Ilham Aliyev in his speech at the meeting of heads of CIS countries, APA reports.

"They were actively involved in the illegal settlement of the occupied territories. This is a war crime under the Geneva Conventions. Thus, from 2019, the Armenian leadership began to resort to new tactics. In fact, this meant giving up the imitation aimed at disrupting the negotiation process," said Azerbaijani President.

As a confirmation of those opinions, Azerbaijani President has recalled the statement voiced by former Armenian defence minister “Armenia prepares for a new war for new territories” within framework of his visit to US. He has noted that in fact, this statement fully reveals the essence of Armenia's aggressive policy. This is unacceptable both in terms of international law and in terms of human morality. And namely, this statement was made in the United States.

“As for the Prime Minister of Armenia, when he was in the occupied territories in 2019, he has clearly said that “Karabakh is Armenia and that is the point”. Certainly, this provocative thesis directed to the violation of the negotiation process could not be unanswered. I have said “Karabakh is Azerbaijan and an exclamation mark” in reply to this. As a result, the history has showed that who is rightful. This demonstrative threat in itself not only against Azerbaijan, but also to the OSCE Minsk Group, disrespect to their activities show that Armenia was deliberately disrupting the negotiation process and in fact has disrupted. Because, if we take into consideration this logic, if “Karabakh is Armenia”, there is no any subject for negotiations in this case” said the head of state.