Azerbaijani President: "Our international authority is quite high, and it has played a special role in having this conflict resolved" 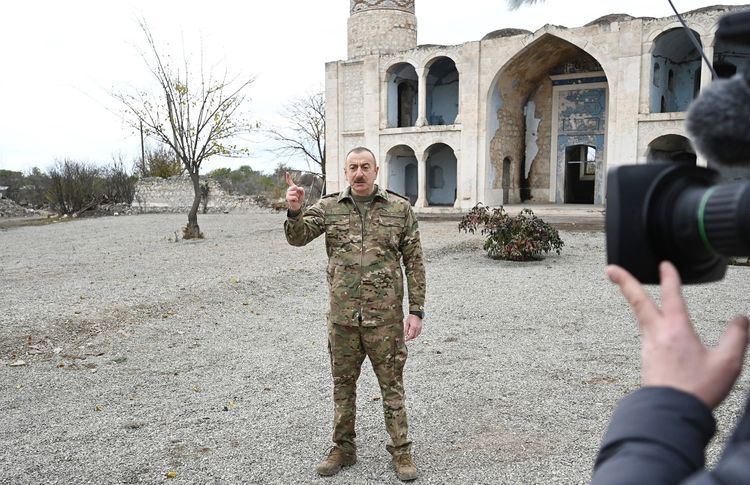 "We have won the information war. We have fully informed the world about the Khojaly genocide," said President of the Republic of Azerbaijan, Commander-in-Chief of the Armed Forces Ilham Aliyev during his speech in front of Aghdam mosque, APA reports.

"There was no information about the Khojaly genocide in the world. It is possible to say that the “Justice for Khojaly!” campaign and the recognition of the Khojaly genocide by more than 10 countries as an act of genocide created a picture reflecting the realities of the conflict and conveyed it to the world community.

We, the country chairing the Non-Aligned Movement, have kept this issue in the spotlight during our presidency of the Non-Aligned Movement, the second largest institution after the United Nations. Today, Azerbaijan chairs the organization, which brings together 120 countries. A summit was held last year. The people of Azerbaijan saw again how important this was. Because during the Second Karabakh War, there were attempts at the UN, the UN Security Council to adopt a new resolution. If that resolution had been adopted, it would not have stopped us, of course, but it could have created an unnecessary picture. It was countries of the Non-Aligned Movement that prevented the adoption of that resolution and supported us. I also thanked them and said that they stood behind us like men even though great powers were putting great pressure on them. Many members of the Non-Aligned Movement recognize Azerbaijan as an independent and strong country ready to defend them. We have provided humanitarian financial assistance to more than 30 countries during the pandemic, including special assistance to the Non-Aligned Movement through the World Health Organization. All this work has paid off. We were able to get the necessary international support in the Armenian-Azerbaijani Nagorno-Karabakh issue, which is a key issue for us.

Today we chair not only the Non-Aligned Movement, but also the Cooperation Council of Turkic Speaking States. Our international authority is quite high, and it has played a special role in having this conflict resolved," noted Azerbaijani President.