How did Caucasian Bureau give Nagorno Garabagh to Armenia for one day? – HISTORICAL NOTE FOR NIKOL PASHINYAN 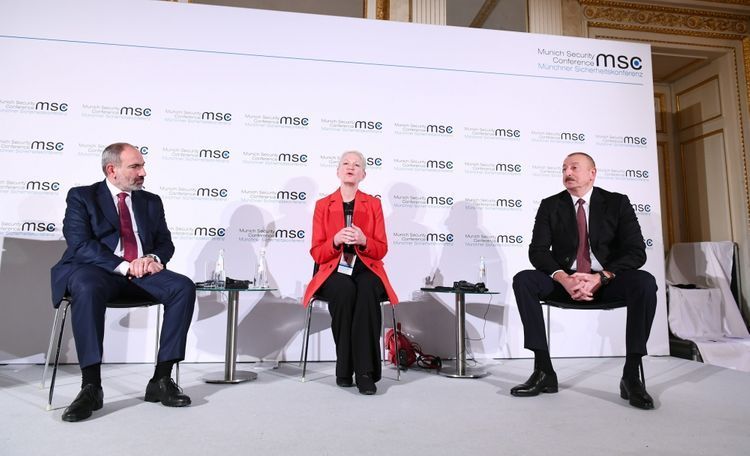 On February 15, in the framework of the Munich Security Conference, the panel discussions were held regarding Armenia-Azerbaijan Nagorno Garabagh conflict. The discussion took place with the participation of Azerbaijan’s President Ilham Aliyev and Armenia’s prime minister Nikol Pashinyan. While the parties tried to substantiate their positions regarding the Nagorno Garabagh conflict, they preferred to refer to even more historical facts including decisions of Plenum of the Caucasian Bureau of Central Committee of the Russian Communist Party held in July 1921. Meanwhile, both the rightful position of Azerbaijan and the academic rank of candidate of historical sciences of President Ilham Aliyev resulted in throwing into the confusion of the Armenian prime minister by the Azerbaijani President using neat arguments.

And what the decisions of the Plenum of the Caucasian Bureau held in July 1921 were telling?

Before moving over to answering this question, it is worth mentioning that in the policy of Soviet Russia, the card of the three historical territories of Azerbaijan namely Nakhchivan, Garabagh and Zangezur was played as the enticing factor to establish soviet power in Armenia and Azerbaijan. Since the soviet power was established firstly in Azerbaijan, the Bolsheviks confirmed that these territories were the Azerbaijani land. And later they claimed that these territories were the “disputed” territories. And finally, when the Soviet power was established in Armenia, the true face of the Bolshevik policy was revealed. On November 29, 1920, after the establishment of Soviet power in Armenia, it was demanded to give all three territories to Armenia. Just under serious pressure of Soviet Russia, the statement of the chairman of the Revolutionary Committee of the Azerbaijan SSR Nariman Narimanov dated December 1, 1920, was issued. In that statement, Narimanov firstly congratulated the Armenian working classes on occasion of the establishment of Soviet power, and then stated that "the territory of Zangezur and Nakhchivan counties are the integral territory of Soviet Armenia, and in the mountainous part of Garabagh, the Armenians should determine their political destiny via referendum". By serious instruction of Mustafa Kemal Ataturk and as a result of efforts of Kazim Karabekir Pasha, Nakhchivan wasn’t united with the Armenian SSR, and in July 1921 Narimanov withdrew his statement regarding Garabagh. And the final event took place just at the Plenum of the Caucasian Bureau of the CC of the Russian KP held in July 1921.

In the scientific work of the prominent researcher of Nariman Narimanov’s heritage, the famous Russian historian Rudolf Ivanov entitled "Battle to the death" (pages 88-89), along with many other documents, the documents of the above-mentioned Plenum of the Caucasian Bureau have also taken its place. Thus, Garabagh issue was brought up for discussion for the first time at the meeting of the Plenum dated July 4, 1921. Minutes #11 of the meeting reads as follows:

Two opinions came up during the discussion of this issue and the following issues were put to the vote:

B) The plebiscite should be carried out in Garabagh with the participation of all Armenian and Muslim populations (Narimanov and Makharadze voted “for”).

V) The mountainous part of Garabagh should be joined to Armenia (Orjonikidze, Myasnikov, Figatner, and Kirov voted “for”).

Q) The plebiscite should be carried out only among the Armenian population in Nagorno Garabagh (Orjonikidze, Myasnikov, Figatner, Kirov, and Nazaretyan voted “for”).

STATEMENT OF COMRADE NARIMANOV: Taking into account that the Garabagh issue is important to Azerbaijan, I believe it is crucial to transfer the final decision on it to the Central Committee of the Russian Communist Party.

Comrade Orakhelashvili was absent when the vote on the Garabagh issue was taken.

So, it was decided to hold the next meeting of the Caucasian Bureau regarding the Garabagh issue. That meeting took place just after one day- on July 5 1921. We read in the protocol number 12 of the meeting:

HEARD: Comrade Orjonikidze and comrade Nazaretyan raised the issue of reconsidering the decision of the previous plenum.
During the discussion of this issue, two ideas emerged, and both of them were put to the vote:

A) Garabagh should remain part of Azerbaijan

B) The plebiscite should be carried out in Garabagh with the participation of all Armenian and Muslim population
For- Narimanov, Makharadze

A) Proceeding from the need to maintain national peace between the Muslims and the Armenians and the constant economic ties of Upper and Lower Karabakh with Azerbaijan, Nagorno-Karabakh should be left within the borders of Azerbaijan S.S.R., with broad regional autonomy and its administrative center in the town of Shusha.

Secretary of the Caucasian Bureau of the Central Committee of the Communist Party of Russia Figatner. (signature)

The analysis of the above-mentioned documents shows that in fact, the Armenian prime minister Nikol Pashinyan committed a diplomatic mistake by trying to refute the decisions of Plenum of Caucasian Bureau of CC of the Russian KP adopted in July 1921 during the panel discussions taking place in the framework of Munich Security Conference because both the sentence reading as “Nagorno Garabagh should be included in the territorial composition of the Armenian SSR” in the first decision of the Plenum and the sentence reading as “Nagorno Garabagh should be retained within borders of the Azerbaijani SSR” in the second decision of the Plenum point to the real owner of Nagorno Garabagh region. This was also especially stressed by Azerbaijan’s President Ilham Aliyev at the panel discussions: "In 1921, the Caucasian Bureau of the Bolshevik Party adopted the decision on retaining Nagorno Garabagh in the territorial composition of Azerbaijan. This decision was about retaining as a part of Azerbaijan, and not handing over to Armenia, as some Armenian historians write".

The "Garabagh has never been an integral part of the independent Azerbaijani state. Garabagh was given to Azerbaijan during the process of establishment of the Soviet Union" expression voiced by Nikol Pashinyan when trying to refute the above-mentioned statement, in fact, shows that he not only has scarce basic historical knowledge but does not have any knowledge at all because the secondary school pupils also know the truth that when the mentioned decision of the Caucasian Bureau was adopted, the Soviet Union or the state named as the USSR didn’t exist. The USSR was going to be established on December 30, 1922, Mr. Pashinyan!