Khudaferin - the bridge got rid of the pain of Karabakh: The bridge of longing for both banks - REPORTAGE - PHOTO 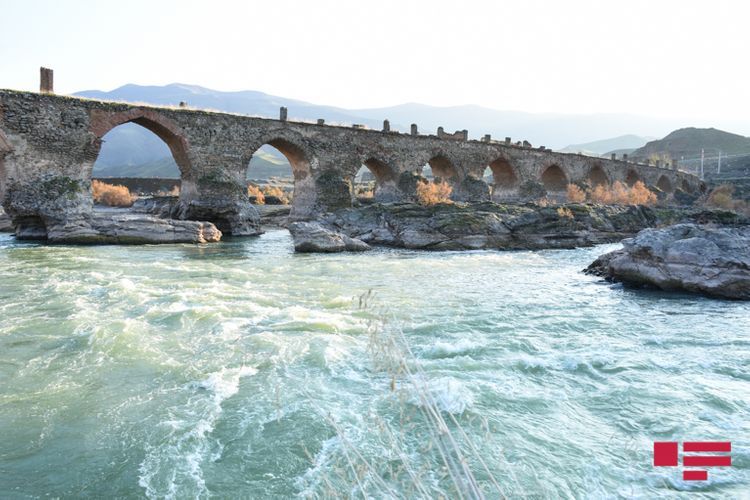 You can read previous articles here:

The victory of Azerbaijani Army put an end to Armenian savage: What do I see in Aghdam

Footsteps of Armenian vandalism in Jabrayil, “Ohanyan line” myth, destroyed by our Arm

Correspondents of APA have visited the liberated lands from occupation by Azerbaijani Army under the leadership of Supreme Commander-in-Chief Ilham Aliyev. Our employees have prepared a series of reportages in the rubric “In the footsteps of victory”. We present the next reportage from these series: 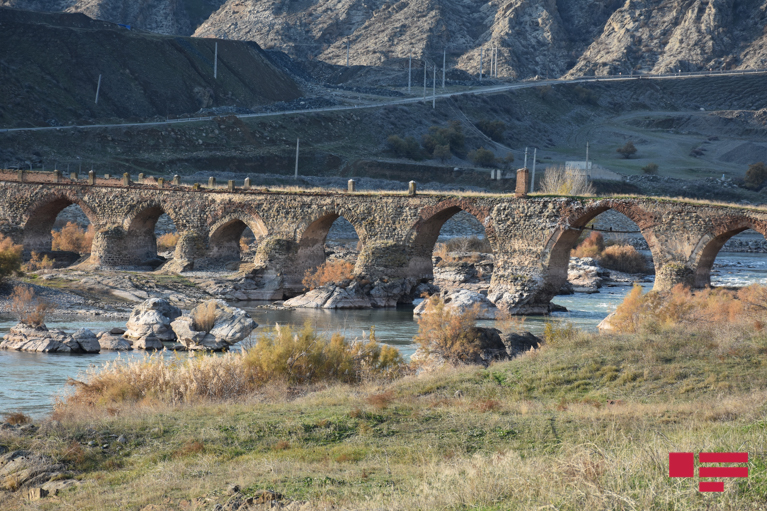 Khudafar's bridges, which connect both sides of the Araz river and were built centuries ago for military and commercial purposes have become more of a spiritual mission holder for us in the last 200 years than a historical monument. 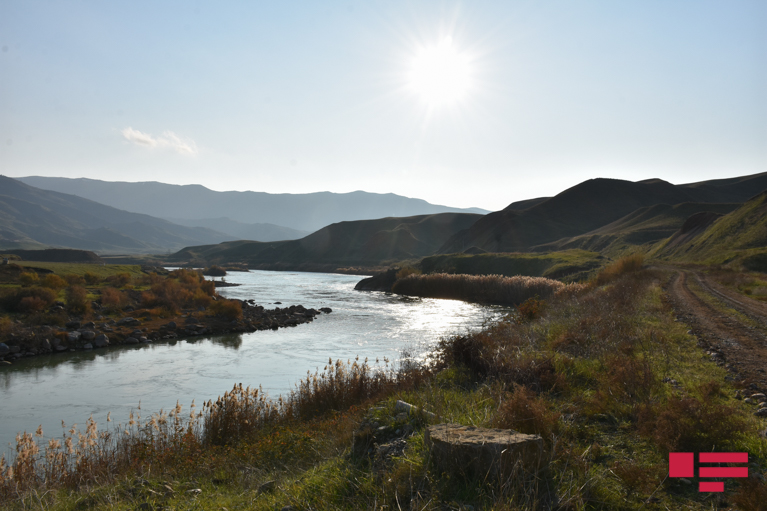 Khudafarin is a spiritual thread that unites the hearts of the people divided by Araz - brothers and sisters, fathers and sons, mothers, and children. 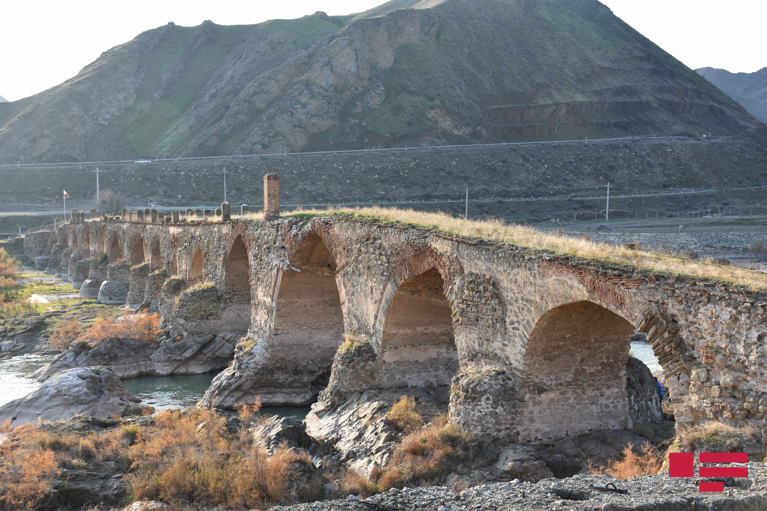 Having seen a thousand storms and storms of history, witnessing the invasions of several rulers, chiefs, and kings, Khudafarin has also taken on a new burden on its shoulders in the last 27 years. A new pain hung from its neck - the pain of Karabakh. 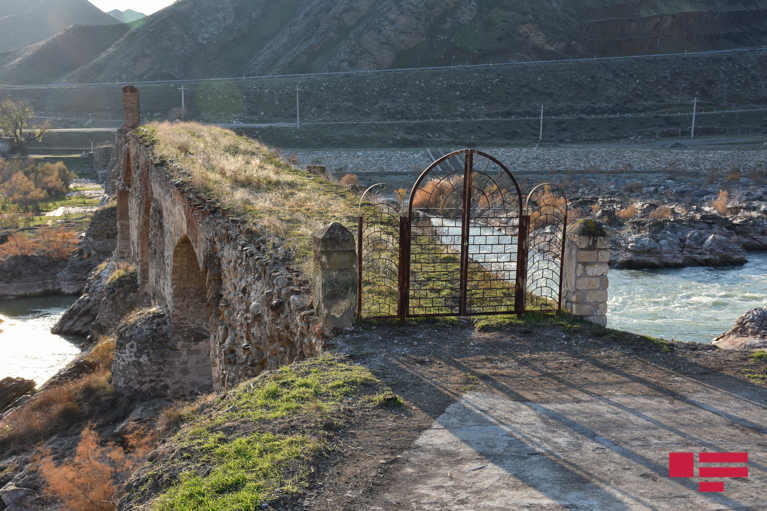 Every time when Khudafar was mentioned in the last 27 years, we not only remembered our homeland, our south but also Karabakh, we thought of the occupied territories. By the way, we felt sorry for this historical monument, which was taken hostage by the enemy. Finally, our 27-year-old languor and shock are over.

27 years of pain, suffering released from our souls. 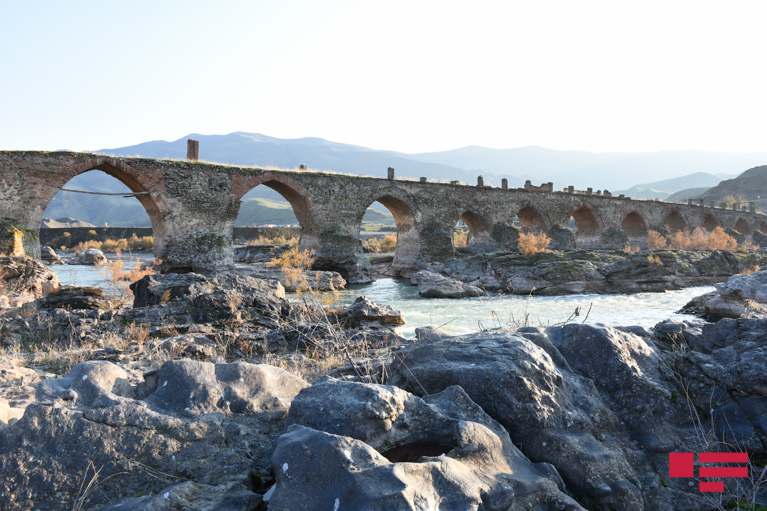 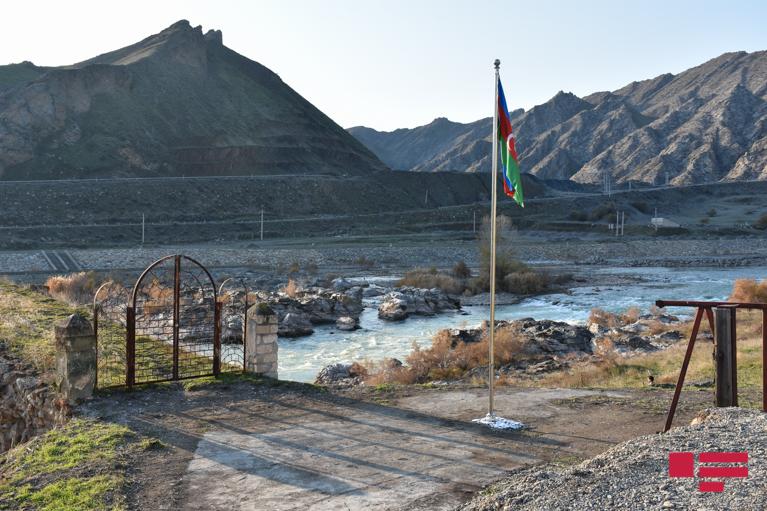 A burden was taken from Khudafarin's "shoulders" and its pain was reduced a little bit.

Echoes of applause from that side

The path of our film crew, which is following this great victory of the Azerbaijani Army step by step, is to Khudaferin's bridges. 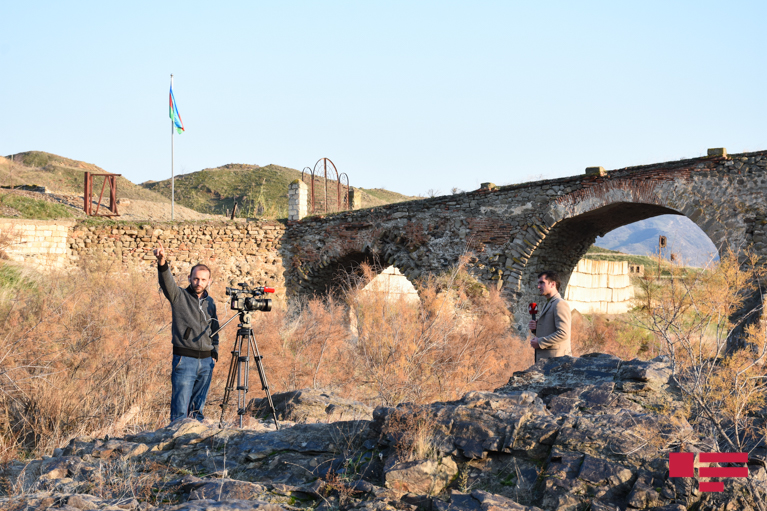 On the way to Soltanli village, we were accompanied by pomegranate and grape orchards planted by Armenians. Then we filmed the current deplorable condition of the monument to the Great Patriotic War at the entrance to the village of Soltanli. We are moving towards Khudafarin. 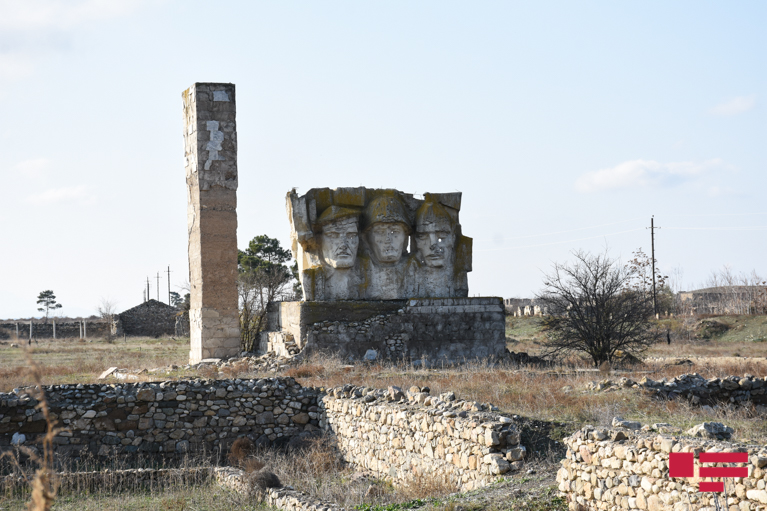 On the right, there are destroyed villages, on the left is Khan Araz. On the side of Araz are our proud border guards guarding the borders of the Motherland.

When the water of the Araz pass through these plains and mountains, will not be angry when it sees the enemy soldiers, it will wave hands and greet our soldiers. The silver waters will flow more abundantly, the reeds adorning its shores will sing more cheerfully, the birds will open their wings broadly with joy as if embracing the sky ... 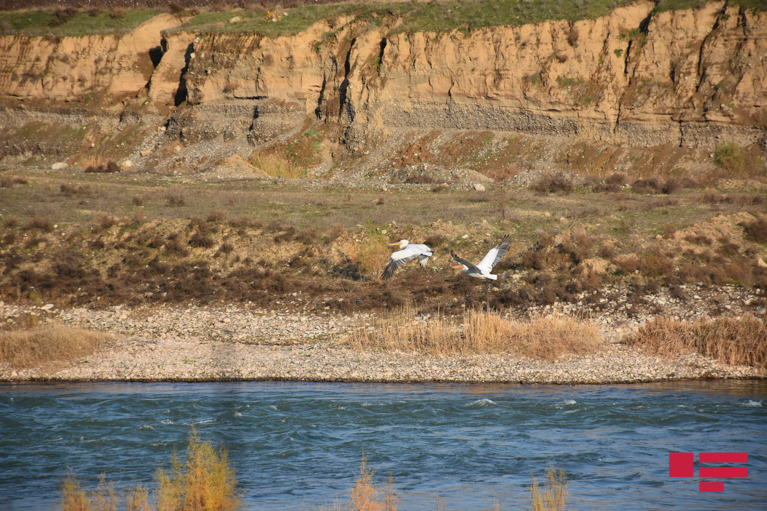 If this part of Araz is a destroyed village, that part is the land of our compatriots who are worried about us. In these 27 years, they have been as worried as we are. That is why when the cars passing on that side see us they signal and rejoice as kids. Our compatriots, who came to the river bank to fish and rest, wave hands and greet their brothers on this side. The exclamation of "Long live", "Karabakh is Azerbaijan", "May God have mercy on our martyrs" mix with the waters of Araz. Our joy has no limits. 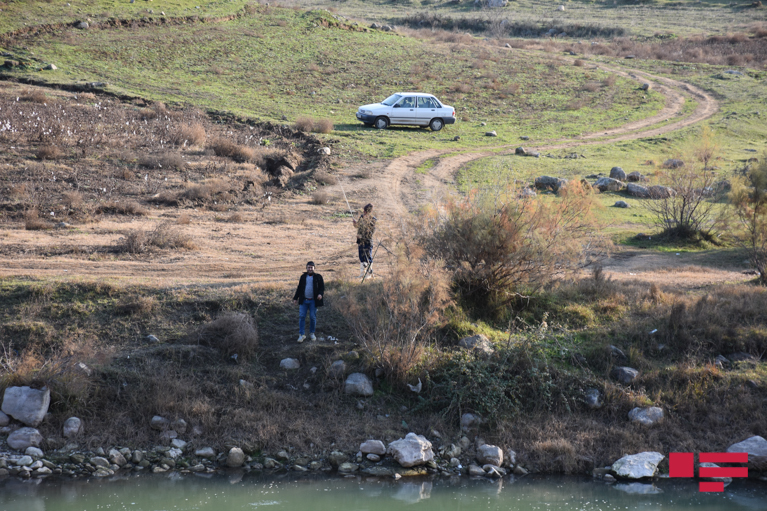 These applauses are also for the fact that we have finally liberated Karabakh from occupation. When our southern compatriots look from that side, they will no longer see enemy soldiers, destroyed houses, and yards. 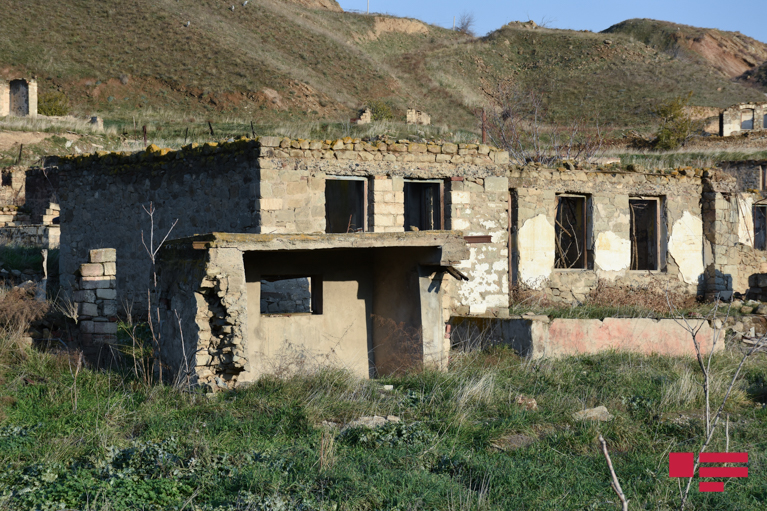 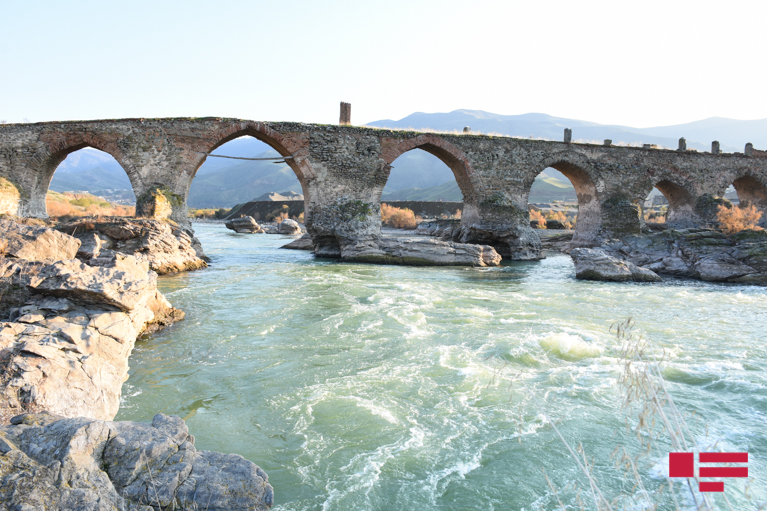 This is the Khudafarin bridge...

The flag of Azerbaijan is waving proudly on the bridge 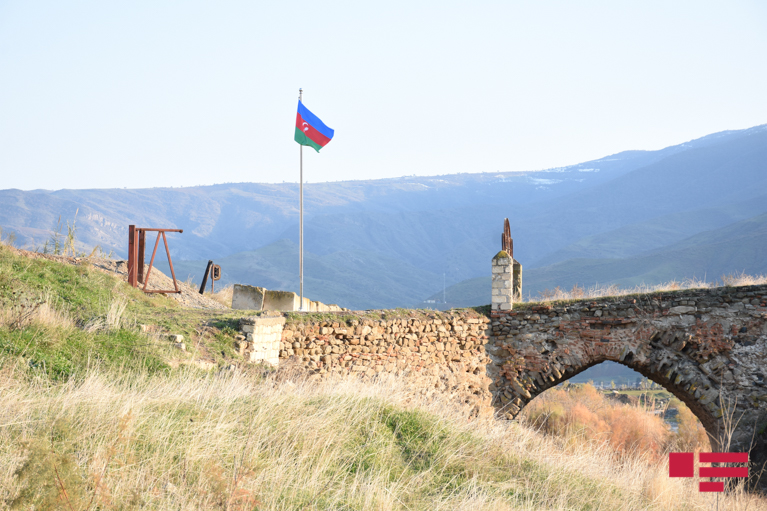 They found shelter in each other as mother and child. Khudafar greets us with a proud attitude that challenged history. It welcomes us with stones, grass, and the rushing waters of the Araz.

We are walking around on the right and left as if we are paying a visit to Kaaba house, we find strength while touching the holy stones, we are refreshed as we touch the waters of Zamzam. We are raising our hands and thank God for giving us these days. 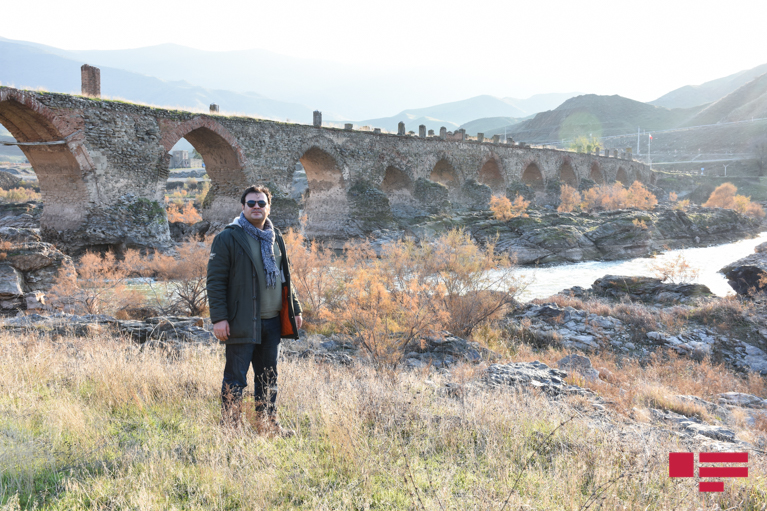 I think at this point it is worth looking through the history of the Khudafarin bridges. Let's see along with its place in our hear, what is the importance of Khudafarin in history? 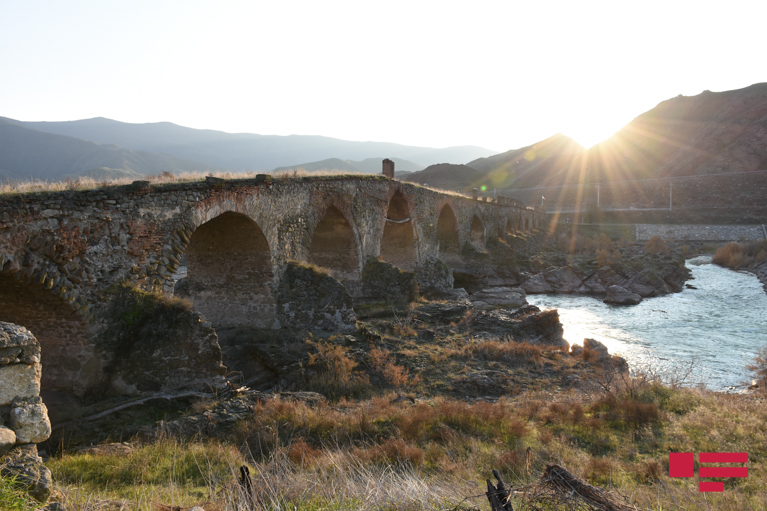 An employee of the Institute of History of Science of ANAS, Doctor of Philosophy in History Bayram Guliyev says that Khudafarin bridges were constructed in order to connect the two banks of Araz river: “About one of the bridges (it is difficult to say which one) hamdullah Mustoufi Gazvini in his work named “Nuzhat al-qulub” write that this bridge was built about in 639 by the first Rashid Caliph, Hazrat Abu Bakr bin Abdullah. However, taking into account that the Arabian army recently entered Azerbaijan in this period, it is difficult to believe that this view is true. Medieval historians preferred to connect persons and monuments to Islamic adults. In general, the tradition of constructing bridges in Arabic architecture has not spread so wide. The tradition of bridge and castle construction shows itself mostly in Saljuglu architecture, the architecture style of Khudafarin bridges is very close to Turkic- Oguz architecture. The foundations of the bridges are built on a natural foundation, ie on a rock. Which caused spans of the bridges to remain sustainable until now. There are also some sayings that yolk was used during the construction of the bridges. This method is used in medieval architecture. The bridges were constructed using baked bricks and river stones. The length of the fifteen-span bridge is 200 meters. 11 span bridge was constructed during the period of Elkhanis. Only three spans of this bridge remained safe until our period. Other spans of the bridge were destroyed after the occupation of Azerbaijan by the Soviets union. Its length is 130 meters. These bridges located in Khudafarin village are a symbol of the separation of northern and southern united Azerbaijan.” 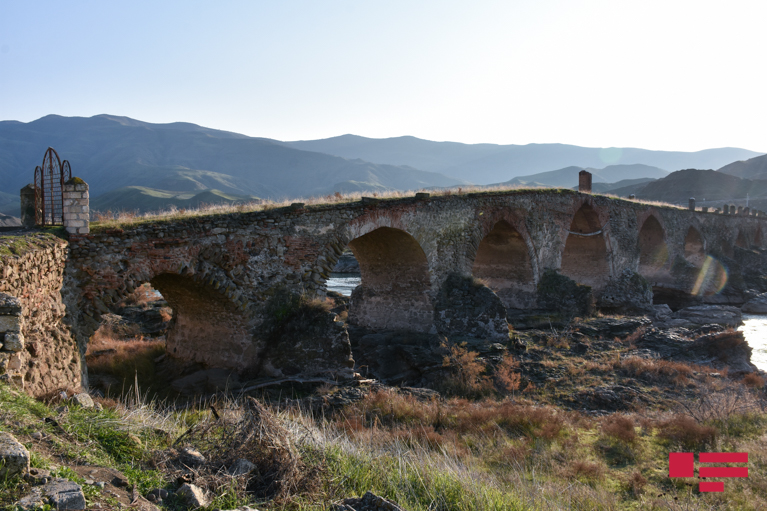 Important note: Ministry of Culture has already developed initial documents about Khudafarin bridges and submitted to UNESCO. All necessary steps will be taken in order to include the Khudafarin bridges in the World Heritage List of UNESCO. And this thousand-year-old historical monument will get its proper value in the world.

The water of Gasimli spring

In these places, in the neighborhood of the bridges, there was Khudafarin village too. Trains passing by went to Nakhchivan. Like all the occupied cities, settlements, villages of Karabakh, this village was also destroyed. The houses, gardens were destroyed, springs were dried up. 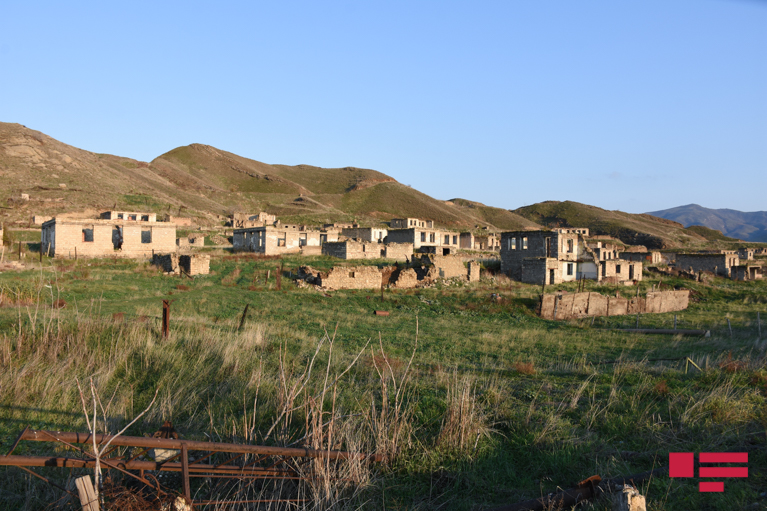 Completing our work in Khudafarin we return back. Many monuments liberated from the occupation of the enemy waits for us... 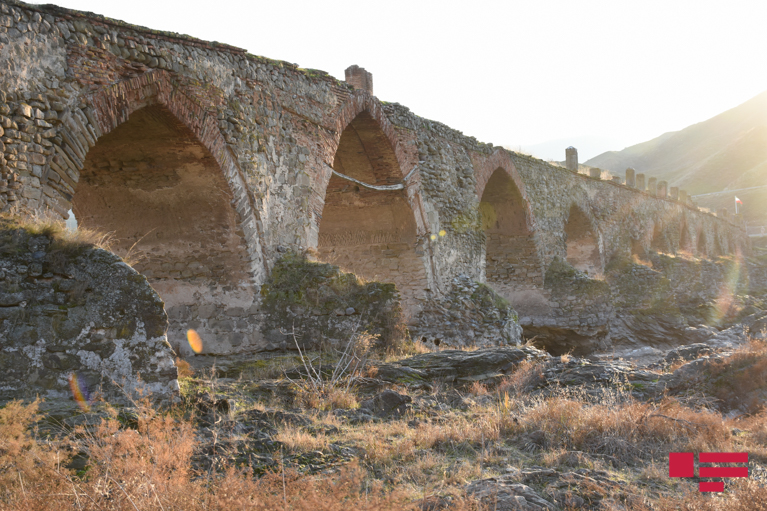 We say see you soon, Khudafarin. 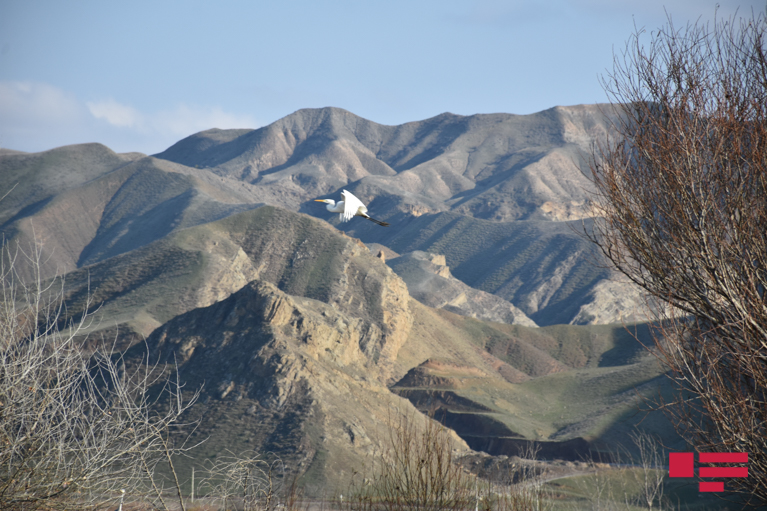 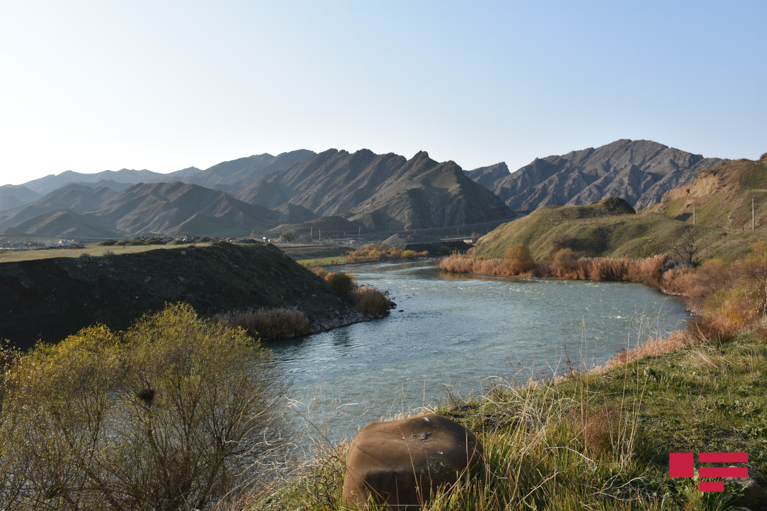 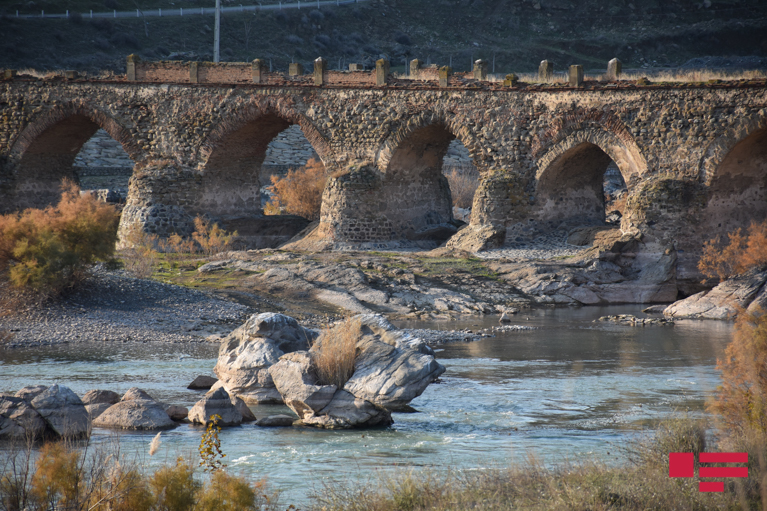 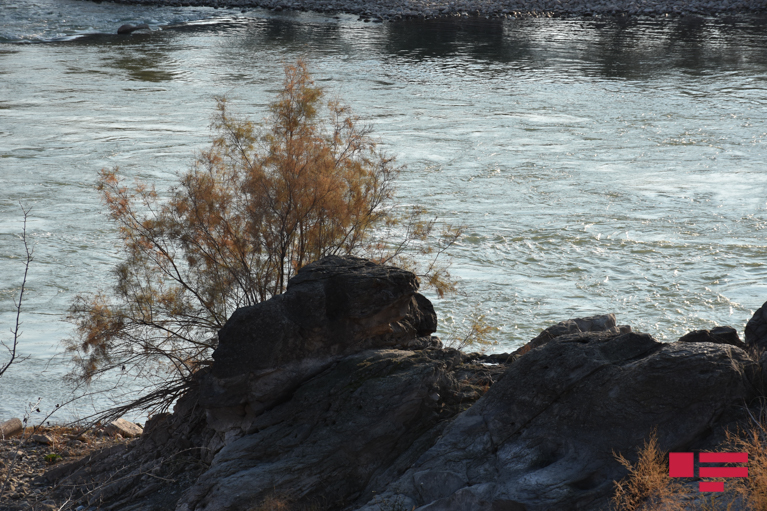 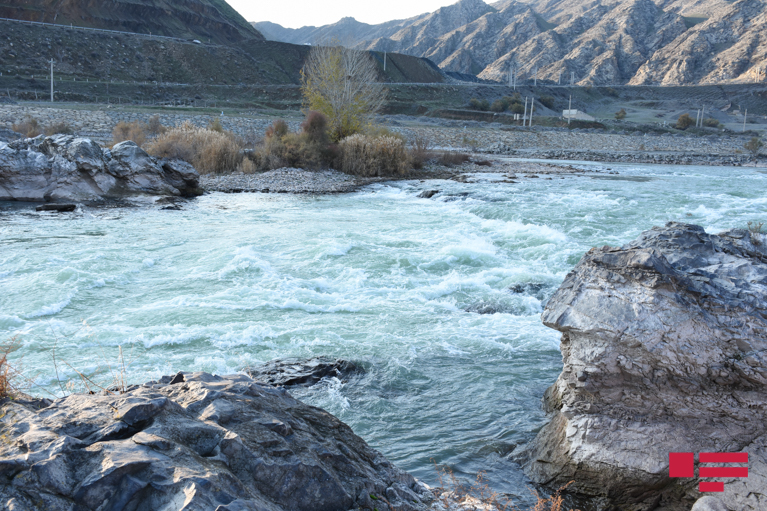 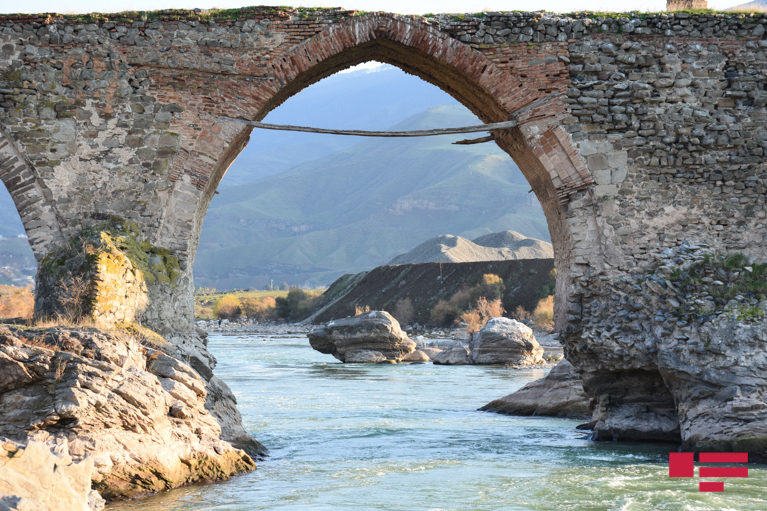 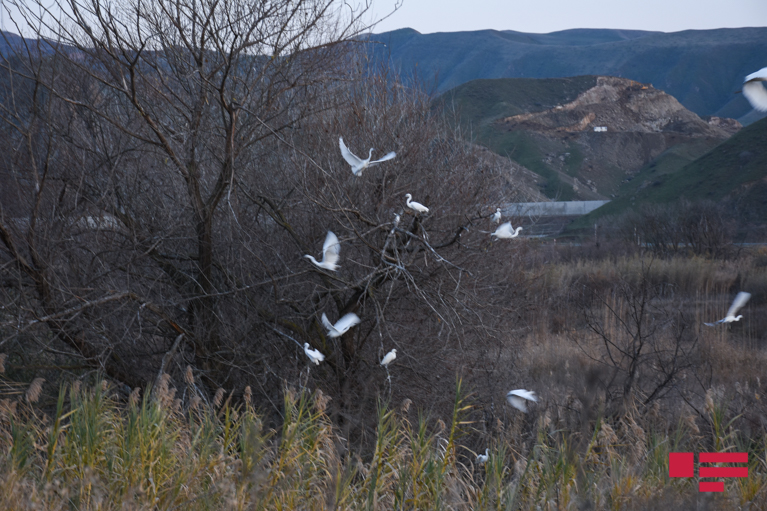 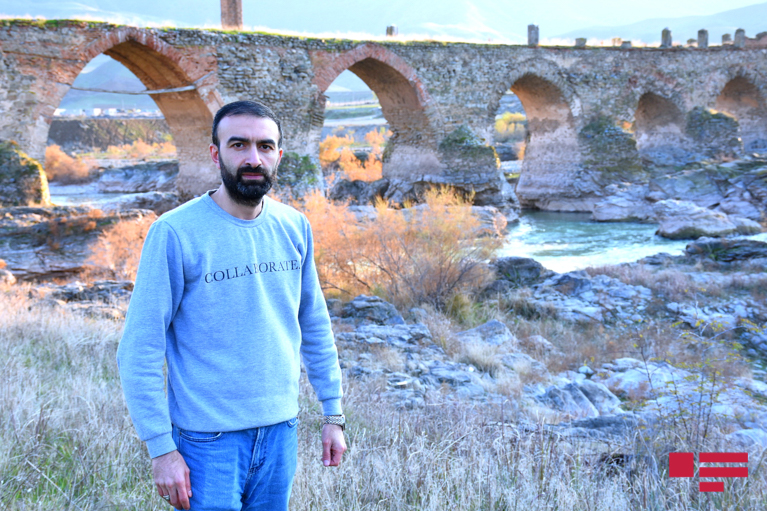