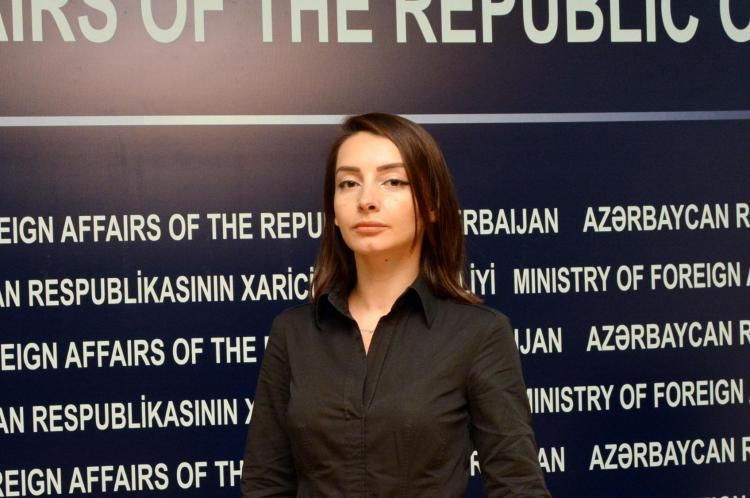 Ministry of Foreign Affairs of Azerbaijan has commented on the statement of Armenian Foreign Ministry regarding the alleged pogrom against Armenians in Nakhchivan, APA reports.

Head of the press service of the Ministry of Foreign Affairs Leyla Abdullayeva stated that continuing the experience of predecessor current leadership of Armenia is busy with making fictitious and not convincing statements.

According to her, in reality, historical facts indicate that Armenian armed forces started in March 1918 to carry out a massacre of the civilian population of Baku, Shamakhi, Guba, Karabakh, continued in June-October of that year in the Zangazur and Nakhchivan counties.

"Official Yerevan knows it very well. Even if the Armenian side wants to forget that tens of thousands of peaceful Azerbaijani civilians had been killed by Armenians especially because of their ethnic and religious affiliation, neither history nor documents kept in the archieve will allow this. It is enough to get acquainted with the memoirs of Stepan Shaumian and the Great Soviet Encyclopedia published in 1926 in order to get acquainted with the massacre and genocide policy committed by Armenia against Azerbaijanis in 1918.

Besides, if Armenia’s MFA wishes to be consistent in its statements, then it shouldn’t remain silent about the mass slaughter committed with great cruelty against peaceful citizens of Azerbaijan’s Khojaly city by Armenian armed forces. This crime against humankind as a result of which 613 civil persons including 63 children and 106 women were killed was committed not one century ago but as recently as 27 years ago. The former President of Armenia even didn’t refrain from coming up with a confession regarding this crime in front of foreign journalists: “Before Khojaly event the Azerbaijanis thought that Armenians are the people who can’t lay a hand on civil population. We broke this mold. And then this very event happened”. In general, on the backdrop of the appeal of cochairmen of OSCE’s Minsk Group to prepare people for peace this discourse of Armenia’s MFA sounds as strange as dangerous. From the point of view of solution of the conflict, instead of giving such statements straining the emotional background, Armenia’s MFA should put aside the “poor Armenian” image and should abandon the groundless claims for Azerbaijan’s territories, put an end to occupation of Azerbaijani territories and think about making specific steps towards solution of the conflict and ensuring the coexistence of the two nations in the peace, stability, security and progress environment”, - L. Abdullayeva stressed.