Minister: "Situation emerged after the war would be featured as a stage of restoration of peaceful co-existence" 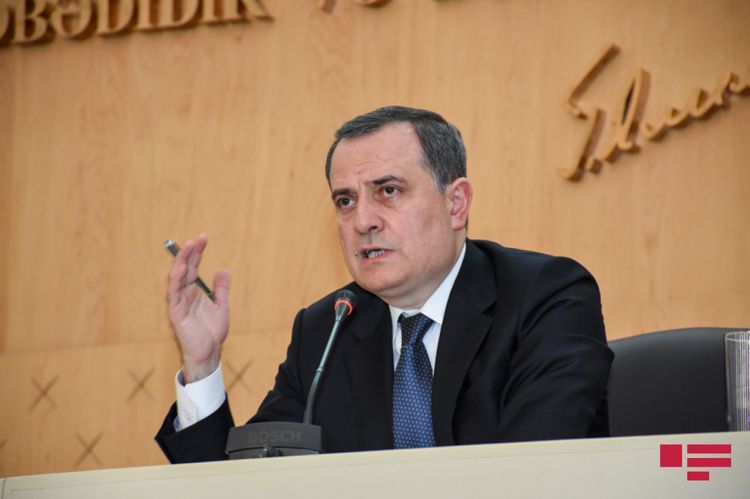 "Conflicts, prolonged foreign occupation and the lack of accountability endanger peace and security. It gives me a pleasure to inform the Council that the illegal Armenian occupation of the territories of Azerbaijan which was a threat to peace and security in the South Caucasus and wider Europe, has come to an end," Minister of Foreign Affairs of Azerbaijan Jeyhun Bayramov said at his speech at the meeting of the GUAM Council of Foreign Ministers, APA reports.

"Azerbaijan regained control over its territories that were under Armenian occupation for almost three decades in blatant violation of the four UN Security Council resolutions. The implementation of decisions adopted by the principal organs of the United Nations is key to the effective and accountable functioning of the international legal order.

I would like to stress the fact that Azerbaijan acted on its sovereign soil and took adequate and proportionate measures necessary to repulse the imminent threat to its sovereignty and territorial integrity, and security of its civilian population. The armed forces of Azerbaijan used force exclusively against legitimate military targets strictly complying with international humanitarian law.

The range and consistency of the attacks as well as the statements of the Armenian side before and during the military operations proved once again that the attacks on Azerbaijani civilians and civilian infrastructure have been preplanned and executed as a part of Armenia’s criminal war strategy.

As we entered the territories liberated recently by the Azerbaijani Army we once again witnessed the scale and gravity of devastation of these areas, including its cultural property. For instance, in the towns of Fizuli, Jabrayil, Zangilan and Gubadli, where Azerbaijani population before the occupation numbered dozens of thousands, practically all buildings and infrastructure were razed to the ground. The situation is not better in the Aghdam, Kalbajar and Lachin districts from which Armenia withdrew in accordance with the November 10 Statement of the Presidents of the Republic of Azerbaijan, the Russian Federation and Prime Minister of Armenia. Departing Armenian military personnel and settlers deliberately and indiscriminately destroyed the homes belonging to the expelled Azerbaijani population of these districts, schools and other public infrastructure. Forests were set on fire, inflicting irreparable damage to the environment. Religious sites were looted. All responsible for those war crimes must be brought to justice.

We hope that the situation emerged after the cessation of the 44-day war would be featured as post-conflict reconstruction and rehabilitation, a stage of restoration of peaceful co-existence. The trilateral statement has created a ground for ending the almost three-decades-long armed conflict between Armenia and Azerbaijan, return of the IDPs to their homes and realization of its huge economic potential. All economic and transport links in the region are supposed to be unblocked now. This can enable our region to strengthen its role in trade between Asia and Europe.

New opportunities for development and cooperation are emerging and GUAM can take advantage of the new realities. To this end, Azerbaijan is ready to work with its partners, including with the individual GUAM Member States, to contribute to peace and stability in the region," noted Minister.