Mustafa Sentop: "Liberation of Azerbaijani lands from occupation is common desire of each TurkPA countries" 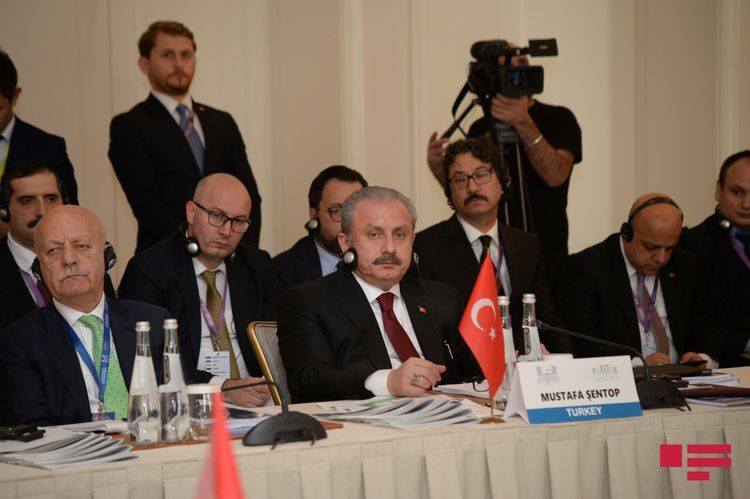 "I am pleased with the strengthening of TurkPA, which gathers parliamentarians of the Turkic states around the same table," said Mustafa Sentop, Speaker of the Grand National Assembly of Turkey, at the meeting of the Parliamentary Assembly of Turkic Speaking Countries (TurkPA) held in Baku, APA reports.

M. Sentop stated that since its establishment, TURKPA has grown and developed step by step: “TURKPA completed its 11 years, it has already gained experience as an international organization. In the future, TURKPA will give more services and implement duties than it does today. Today we are in Baku as a guest and at home. We should not be deceived by the physical distance between our countries. We are close to each other, we are together. Our common history, language and culture remind us of this.”

The chairman of the Turkish parliament noted that being Azerbaijani lands under occupation makes our heart pain: “Liberation of Azerbaijani lands, waving of its flag in every inch of its land is the mutual desire all of the TurkPA countries. We are always by Azerbaijan’s side. We give every support for the end of the occupation and for bringing peace to the region, and we are ready to do it in the future as well.

M. Sentop said the Independence War was a matter of life and death for Turkey: “During those difficult times the support coming from either Azerbaijan or Turkestan geography is reflected in both history books and the records of our Heroic Assembly”.

He also stressed that he was very glad that Uzbekistan and Northern Cyprus Turkish Republic were invited to the meeting of TurkPA Council held in Baku: “I express my gratitude to Ogtay Asadov, Azerbaijani government, and parliament who have ensured this. I would like also to see Turkmenistan among us one day. Inshallah, in the nearest future, TurkPA will bring together the parliaments of all independent countries. We accepted chairmanship over TurkPA from Kyrgyzstan’s parliament. We have been making efforts to strengthen TurkPA and turn it into an exemplary international organization for one year. The chairmanship is already transferred to Ogtay Asadov, Chairman of the Azerbaijani Parliament. We express to you our gratitude for your support during Turkey’s chairmanship and wish success to Ogtay Asadov, Chairman of Azerbaijani Parliament”.