President: "Azerbaijan is establishing a connection with its integral part, Nakhchivan. Azerbaijan connects with Turkey" 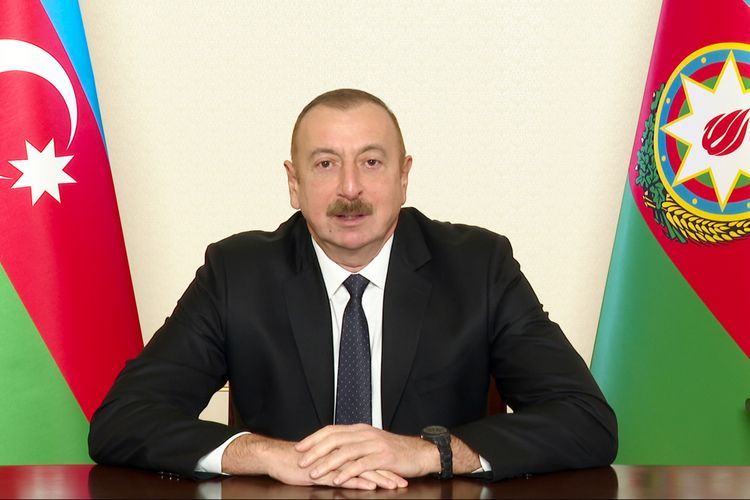 "The ninth paragraph states that all economic and transport links are being restored in the region. In order to organize the unimpeded movement of citizens, vehicles and goods in both directions, the Republic of Armenia guarantees the security of transport links between the western regions of the Republic of Azerbaijan and the Nakhchivan Autonomous Republic. Control over transport communications is carried out by the Border Service of the Federal Security Service of Russia and, by agreement of the parties, the construction of new transport communications linking the Nakhchivan Autonomous Republic with the western regions of Azerbaijan will be ensured", said President of the Republic of Azerbaijan Ilham Aliyev in his address to the nation, APA reports.

"This ninth paragraph was included in the statement precisely as a result of my persistence. Because when the peace plan was discussed for many years, the situation was not as clear and specific. In other words, the plan was that all communications would be opened, but there was no talk of a corridor that would link the Nakhchivan Autonomous Republic with the rest of Azerbaijan. It was believed that this general expression covers this as well, but here it explicitly states that a corridor is being created between the Nakhchivan Autonomous Republic and the main part of Azerbaijan, and the security of this corridor will be provided not by Armenia, but by the Border Service of the Federal Security Service of Russia. So this corridor will be absolutely safe. At the same time, the second issue is the construction, by agreement of the parties, of new transport communications connecting the Nakhchivan Autonomous Republic with the western regions of Azerbaijan. For a complete and future-oriented solution of this issue, an additional paragraph was included. So what does this mean? It means that there should be two corridors. If necessary, there should be two corridors. This is our historic achievement. We are taking Nakhchivan out of the encirclement and, at the same time, opening a new transport artery. I can say that all countries will only benefit from this. Azerbaijan is establishing a connection with its integral part, Nakhchivan. Azerbaijan connects with Turkey. Russia, Azerbaijan, Turkey and Iran. Armenia, if it wants, may also join this corridor. Thus, a new five-sided cooperation platform can be created in the region. I have already brought this idea to the attention of the presidents of Russia and Turkey. Both Recep Tayyip Erdogan and Vladimir Putin reacted positively to this. Here is our proposal. We want long-term peace to be established in the region. To achieve this, cooperation needs to develop alongside security measures. We are ready to cooperate. Among the issues mentioned in the ninth paragraph, the priority for us is the issue of connecting Azerbaijan with the Nakhchivan Autonomous Republic and, at the same time, creating a new transport corridor between Azerbaijan and Turkey. As you know, we put the Baku-Tbilisi-Kars railway into operation several years ago. This is a railway link between Turkey and Azerbaijan. If this project is also implemented – and I am sure it will be – it will be a new link, and each of the five countries can benefit from it. What could be better than this project for regional security and cooperation? Nothing! Who is the initiator of this? We are! Who included this item here? I did! Today, on 1 December, we are already seeing some progress of this work", noted the head of state.