President Ilham Aliyev: "Kocharyan and Sargsyan, you have knelt before us" 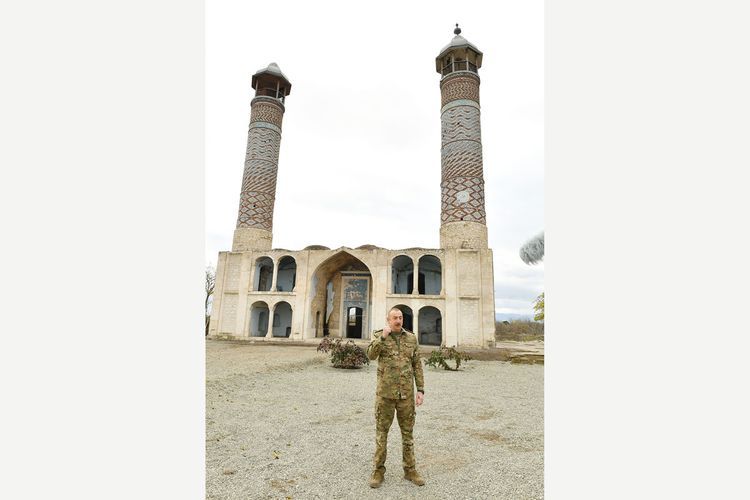 "There are more than 10,000 deserters in the Armenian army and there would have been more. If we carried out the planned operation in Aghdam, thousands of Armenian servicemen would either fled or died. We have shown that it is the people of Azerbaijan who are truly warlike. We have shown that we will never put up with this occupation. Let them look at my speeches. I have said perhaps a thousand times in the last 17 years that we will not come to terms with this occupation. They thought that they could keep our lands under occupation forever. Because those who invested so much and built so many fortifications here, in Fuzuli, in Jabrayil wanted this," said President of the Republic of Azerbaijan, Commander-in-Chief of the Armed Forces Ilham Aliyev during his speech in front of Aghdam mosque, APA reports.

"There were several days of fierce battles for Soltanli village of Jabrayil district. They built fortifications there that may not have existed in the world. Why? They did not want to leave. They thought that they would live there forever. They wanted to Armenianize our lands. The whole city of Aghdam has been destroyed. They demolished it in the 1990s so that if a peace agreement was signed, the Azerbaijani people would not be able to come and live here. Everything is mined. Most of the mines are here. But they were wrong. For all these years, we have been living with one desire, with one wish – to return to these lands, and we have returned. We have destroyed the Armenian army. The Armenian army is almost non-existent now. We have destroyed war criminals. We have destroyed their scum. I said this in Fuzuli and I want to say again that we have destroyed Kocharyan’s and Sargsyan's army. We have shown our strength against Kocharyan and Sargsyan. We have defeated them. Who is Pashinyan? I do not want to talk about him now. I have already said what is necessary. Kocharyan and Sargsyan, you have knelt before us, you have brought this place, all the occupied lands, to this plight. You have destroyed this mosque. They fled and hid during the Second Karabakh War. They could not even stick their noses into the battle zone. So where is your heroism? I said to them – take out this metal scrap, it has no value. You are wearing orders of heroes on your chest. They you false heroes. Look, I am standing here, in front of the mosque you have destroyed, in the city of Aghdam which you destroyed, I came here with my army. I came here as a winner, while you will live the rest of your pathetic life with a mark of defeat and cowardice. Why are you hiding there like mice? Kocharyan and Sargsyan, I am telling you. Pashinyan is nobody. His only concern now is to stay in power. Therefore, he is imprisoning captures all the opposition. The West remains silent about this, it is silent, it has water in its mouth. Can't they see what's going on there? War criminals and Khojaly executioners, we have destroyed you. Azerbaijani soldiers, Azerbaijani officers have destroyed you. And it serves you right!" noted the head of the state.