President Ilham Aliyev: "Unfortunately, Minsk Group did not play any role in resolution of the conflict" 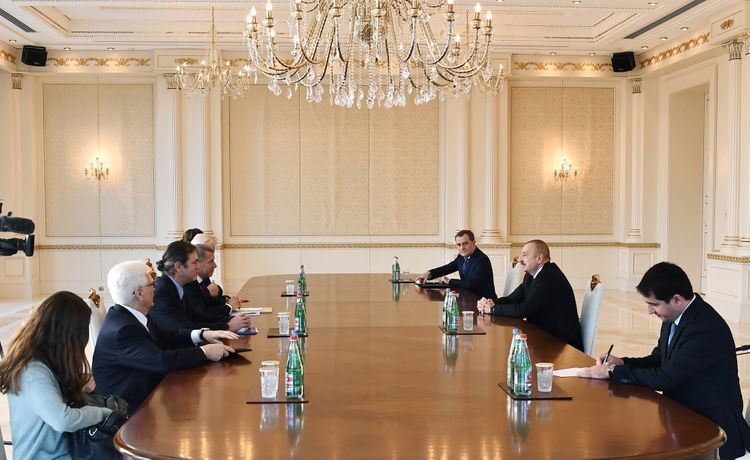 "Unfortunately, Minsk Group did not play any role in resolution of the conflict, though, Minsk Group had a mandate to do it for 28 years," said Azerbaijani President Ilham Aliyev at the meeting with OSCE Minsk Group co-chairs Stephane Visconti of France, Andrew Schofer of the US, Ambassador of Russia to Azerbaijan Mikhail Bocharnikov and Personal Representative of the OSCE Chairperson-in-Office Andrzej Kasprzyk on December 12, APA reports.

"It has been a long time since we met last time of last year. And a lot of things happened during this time, because pandemic which changed the world completely and also resolution of the Armenia-Azerbaijan Nagorno-Karabakh conflict which changed the region. Now the new situation in the region is completely new. Azerbaijan resolved the conflict which lasted for almost 30 years, resolved by force and by political means. And I can only agree with what president Putin said, the president of the one of the co-chair countries, that Nagorno-Karabakh conflict is already in the history. I share this view. Unfortunately, Minsk Group did not play any role in resolution of the conflict, though, Minsk Group had a mandate to do it for 28 years. I participated in negotiations for the last 17 years. As I said, during the war, though there have been an activity of the Minsk Group, in elaborating ideas and trying to be creative, but there was no result. And this is a reality.

Therefore, Azerbaijan resolved it itself. And by defeating Armenia on the battlefield, we forced aggressor to admit its defeat, to sign declaration which we consider as an act of capitulation of Armenia. And also, all the political forces of Armenia accepted, the ruling regime shares this view that this is a capitulation. They call it a humiliating capitulation. And full responsibility is on Pashinyan's dictatorial regime," noted the head of state.