President of Azerbaijan: “Our mission would be unfinished without Shusha” 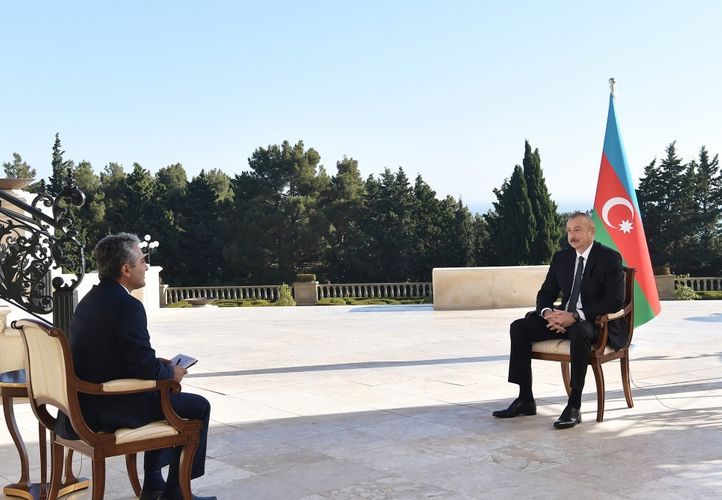 “The direction is everywhere”, said President of Azerbaijan Ilham Aliyev in his interview with Turkey’s “A Haber” television channel on October 16 when answering the question saying “The heart, the eye of Garabagh – Shusha. The eyes, ears of Azerbaijanis are waiting for the news that will come from Shusha. Have you set direction as Shusha?”, APA reports.

The head of state noted that every inch of the occupied lands is near and dear for us: each city of it. And for me, the value, the price of each village is the same and equal in comparison with another village, another region. But you also know well that Shusha has a specific place in heart of the Azerbaijani people. This is our historic city. It is the ancient cultural center. Shusha presented to Azerbaijan a number of very talented, ingenious personalities. Of course, our mission would be unfinished without Shusha. This issue was always on agenda during the period of discussion. You see, there were a number of issues on the table of negotiations during the previous period and some proposals were such as okay, Azerbaijan should recapture these 5 regions, should be satisfied with this, and the rest should be left, i.e. you want to recapture everything, but this is impossible, there should be a compromise, etc. But I have never agreed to this. It wouldn’t be correct at all to recapture 5 regions, to leave the remaining regions for a later, indefinite time, and to consider the issue as solved. Therefore, at various phases, the mediators and some international organizations were surprised why Ilham Aliyev doesn’t agree to this? After all, we offer and give him 5 regions – while it seems Armenia didn’t want to return even those 5 regions – but such proposals have been made. But my stance has always been such as our mission would be incomplete without Shusha. Therefore, of course, the liberation of Shusha from occupation occupies special place among our targets. We should strive for this. We should achieve this. When this will occur, the near future will show this”.

Elman Rustamov: “Exchange rate for national currency will be stable this year”

Elman Rustamov: “Azerbaijan and Turkey do not hold negotiations on swap”

Elman Rustamov: "Surplus of 10% of GDP may appear in current account this year"

Works are underway for gasification of Shusha and Agdam

Azerbaijan’s revenues from oil export increased by more than 40%

Chair of CBA reveals level of inflation for this year

Armenia records 3,536 coronavirus cases over the past day

Armenian Deputy PM: “There are positive points between Yerevan and Baku on railway”

48% of population not vaccinated in Azerbaijan

Distribution of COVID-19 infection in Azerbaijan by age category announced

One more school in Baku switched to distance education