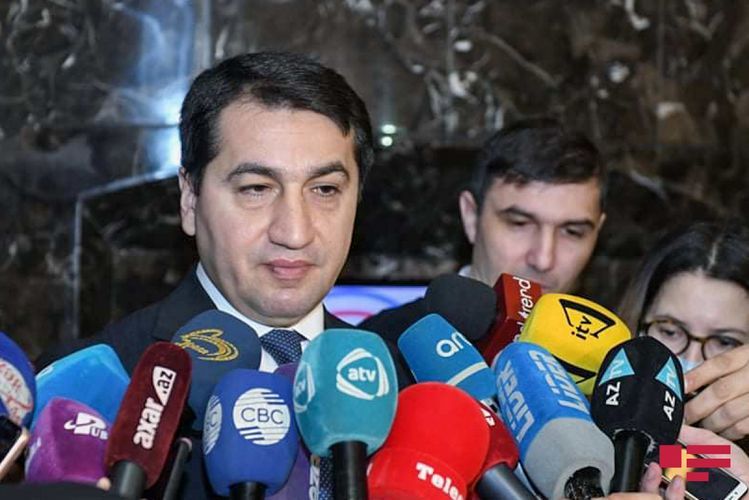 “At the Munich Security Conference, a debate took place between the President of Azerbaijan and the Prime Minister of Armenia. In the framework of these debates, which were broadcast live, each of our citizens and the world community once again witnessed the exposure of Armenia and, in particular, how Pashinyan himself drove himself into a shameful position”, Assistant to the President of Azerbaijan, Head of the Foreign Policy Affairs Department of the Presidential Administration Hikmat Hajiyev told journalists, APA reports.

“Here, generally we witnessed complete exposure of groundless cavils and lies put forward by Armenia regarding the settlement of the conflict. After his presentation in a shameful and embarrassing form, the Armenian Prime Minister is trying to justify himself with different nonsensical and groundless ideas by returning to Armenia now. The Armenian public, political figures of Armenia expressed their attitude to this issue and said that they were ashamed of Pashinyan. This in itself showed once again that Azerbaijan's decisive, unambiguous and fair position on the settlement of the conflict was brought to the attention of the world community by President Ilham Aliyev in a reasonable form by using the rostrum of the prestigious and important event such as Munich Security Conference.


The international community witnessed once more that Armenia’s views on the conflict are absolutely destructive. Armenia’s purpose is just to keep status-quo, based on the invasion. As well as thesis, claimed by Armenia is nothing, but a lie. Now they are unsuccessfully attempting to justify their such nonsensical opinions”, stressed H. Hajiyev.