President: “Armenia wants to obstacle implementation of the Zangazur corridor. However, will not succeed” 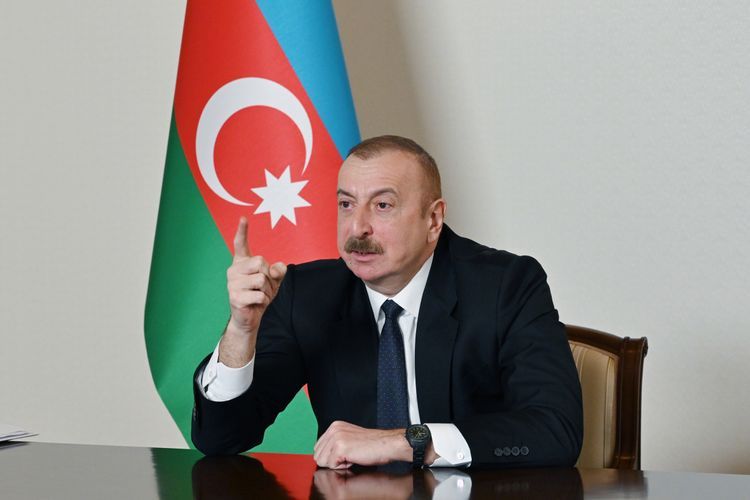 “I have expressed this issue and the conflict in almost all my speeches and international events. I knew that this factor would be decisive in educating the younger generation. I have heard these words in most of the bilateral meetings that you should cooperate, if you cooperate, if you can convince those living in Karabakh, if Armenia sees that Azerbaijan shows kindness, then the issue will be solved. They wanted to deceive us. I said that cooperation is possible only if the enemy withdraws from our territories. Look, I'm still loyal to my word,” President of the Republic of Azerbaijan, Chairman of the New Azerbaijan Party Ilham Aliyev has said in his speech at the 7th Congress of the New Azerbaijan Party (YAP) in a video format, APA reports.

Head of state noted that the enemy did not withdraw itself, we expelled it, at the same time we are ready for cooperation: “Deputy PMs of Azerbaijan-Armenia-Russia have already met for many times. What do they talk about? About cooperation. Are we against cooperation? No! Armenia deviates from cooperation now. Armenia tries to prevent the execution of the Zangazur corridor now. But it will not be able to achieve. We will make them. We will achieve all our desires, just as üe expelled from our territories. But would cooperation with them be beneficial for us at those times? Of course, no. It has been said many times that many representatives of the citizen community come, meet. There were such meetings for a while. But we saw that the main essence was left aside here. As if there was no war. There was no Khojaly genocide. As if our refugees, internally-displaced people were not expelled from their territories by Armenians. Our buildings, mosques were not destroyed. How can we forget it? They tried hard to convince us that our oil pipelines would pass through the territory of Armenia. After I rejected it, they delayed financing of the Baku-Tbilisi-Ceyhan oil pipeline. At that time, we needed loans. Leading international financial bodies did not give us credit in order to force us for it. I said that, if they don’t give, how it is said, …… we will find funds ourselves. Look, this reality has been created by us and I say again moral preparation played a crucial role.”

Kremlin to sign agreements on adding new territories to Russia