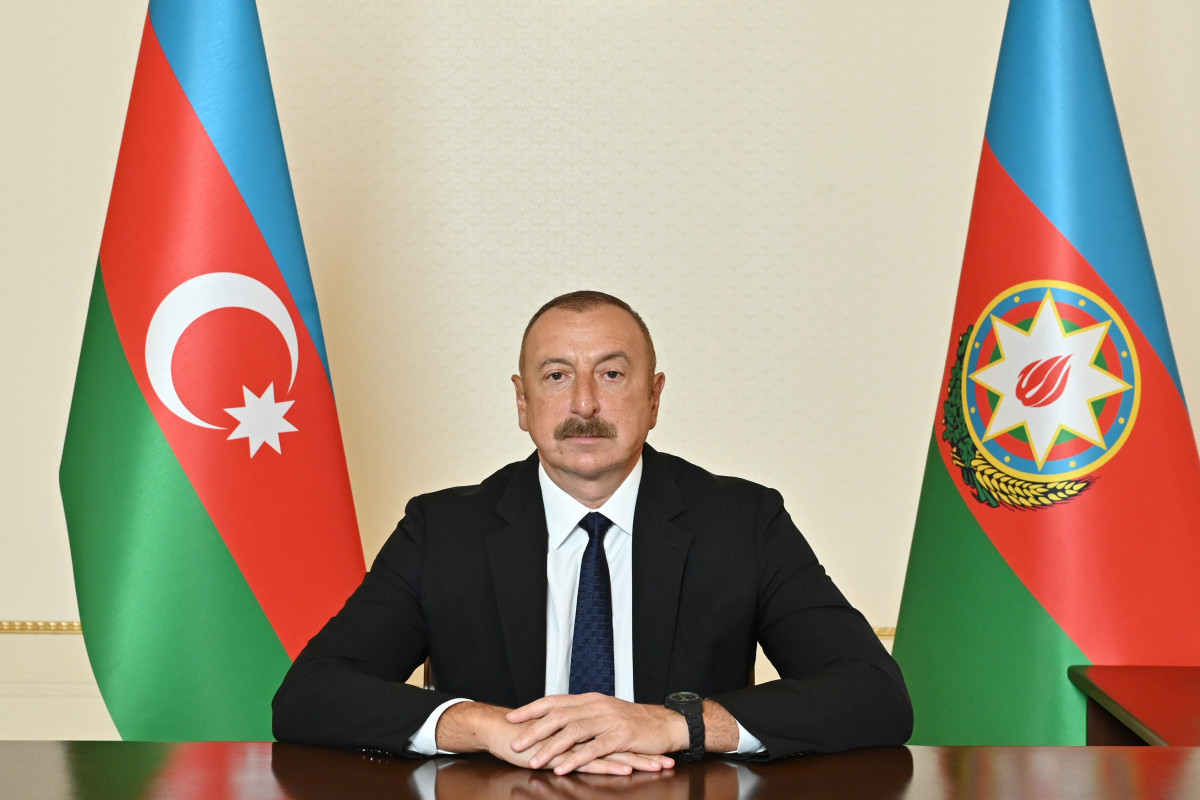 The 11th Session of the World Urban Forum under the motto “Transforming our Cities for a Better Urban Future” continues in Katowice, Poland, APA reports.

President of the Republic of Azerbaijan Ilham Aliyev has made a statement in a video format at the session.

I am pleased to address the World Urban Forum.

This year, we mark the 30th anniversary of Azerbaijan’s membership in the United Nations. To celebrate this important occasion, a landmark event devoted to the attainment of Sustainable Development Goals in the post-pandemic and post-conflict era was organized in the liberated city of Shusha, the cultural capital of Azerbaijan in March this year with the participation of UN agencies.

The participants of the event deliberated on the progress made by Azerbaijan in the achievement of Sustainable Development Goals, as well as how to revive the liberated territories and bring life back there.

The 2030 Sustainable Development Agenda and the New Urban Agenda guide our efforts to achieve sustainable urbanization and better urban future for our cities. While preserving the historic look of capital city-Baku, we have succeeded in rebuilding and modernizing its infrastructure. It is worth noting that modernization and reconstruction of Baku and other cities of Azerbaijan has exposed us to new opportunities and experiences in terms of urban development. Baku, which is considered as one of the most beautiful cities with its unique architecture, parks and boulevards, combines in harmony the historical heritage and modernity.

For us, sustainable urban development has gained even more value following the Patriotic War of 2020 when Azerbaijan liberated its territories from three-decades-long Armenian occupation.

Armenia has purposefully destroyed cities and villages and robbed and plundered every cultural and religious monument in the occupied territories of Azerbaijan throughout its almost 30-year occupation, turning them into a stark example of urbicide and culturicide. Perhaps, the destruction of cities of this extent has not occurred anywhere else in the world since Second World War. 9 Azerbaijani cities and hundreds of villages have been wiped out. The destruction of Aghdam city was of such magnitude that it was named by international experts as "Hiroshima of Caucasus". In Fuzuli, the Azerbaijani Army could not find a single building to raise our flag after liberation.

Foreign diplomats, journalists, and representatives of international NGOs have witnessed this vandalism during their visits to the liberated territories and documented the whole scale of destruction.

Despite the three-decades-long Armenian occupation, Azerbaijan is keen to turn the page of war, normalize the relations and sign a peace agreement with Armenia, based on mutual recognition of sovereignty and territorial integrity of each other. Azerbaijan presented 5 basic principles for peace negotiations and Armenia accepted them. We believe that a peace agreement would turn our region into a region of peace and cooperation.

Azerbaijan is currently undertaking one of the most complex and ambitious reconstruction and rehabilitation efforts in contemporary history.

The process of reconstruction starts with demining. The massive mine contamination is the main challenge ahead of us and slows down reconstruction and return of internally displaced persons. According to initial estimations, during the times of occupation, Armenia planted more than one million landmines. Since the end of the Patriotic War in November 2020, more than 220 Azerbaijani citizens were killed or severely injured as a result of landmine explosions.

Azerbaijan is applying modern urban planning and utilizing the concepts of “green energy” and “zero emissions” in the liberated territories. For 30 years our internally displaced persons suffered from Armenian occupation and were deprived of their homelands.

The first pilot project for the return of internally displaced persons was implemented in the village of Aghali of Zangilan region. This May first residents of the Aghali village started to resettle in their homelands. Smart village Aghali has become one of the most modern villages in the world now.

The master plans of some of the cities in the liberated territories are ready.

The Master Plan of Shusha is based on retaining the tremendous historical heritage of the city.

In Aghdam we are building a completely new city with population of tens of thousands of inhabitants which will become an industrial center of the Karabakh region. The Aghdam Industrial Park with 200 hectares of area is already operating and open for investors and entrepreneurs.

We are building Zangilan with a view to integrate this city into nature and turning it into a park city.

Overall, our target is to combine speed and quality in the reconstruction process whereas the protection of the environment will be among our priorities. We aim to build inclusive, safe, resilient and sustainable cities and villages in line with Sustainable Development Goals. New cities and villages will have a harmony of living and working conditions.

All this work is being conducted with Azerbaijan’s own financial resources.

We believe that the reconstruction conducted by Azerbaijan on such a large scale turns our liberated territories into a laboratory of excellence in urban development. Azerbaijan will share its huge experience in this domain with the international community.

Having said that, the solidarity and international support in the sphere of reconstruction of the liberated territories is of crucial importance to us. It will strengthen our belief that Azerbaijan is not alone in its noble endeavours.

Together with United Nations, World Bank and the European Union, we have already implemented the joint recovery needs assessment in our three liberated regions.

During her visit to Azerbaijan this March, we had a chance to discuss the future of our cooperation with Madam Maimunah Mohd Sharif, Executive Director of UN-Habitat. Madam Executive Director visited the liberated Aghdam city and witnessed the scale of destruction herself. We are willing to have more close cooperation with UN-Habitat in the reconstruction of our liberated territories and expect their experts to be a part of this reconstruction process. The discussion on the organization of the annual National Urban Forum this year in Azerbaijan, in Aghdam, is also underway between Azerbaijan and UN-Habitat.

In conclusion, it is my great pleasure to announce Azerbaijan’s readiness and willingness to host one of the next sessions of the World Urban Forum. As a country with a huge experience in the organization of high-level international events, I am confident that the World Urban Forum in Azerbaijan would be successful.

I wish the Forum every success. Thank you.

The United Nations Human Settlements Programme (UN-HABITAT) holds a World Urban Forum dedicated to the problems caused by rapid urbanization every two years. The 11th session of the World Urban Forum will last until 30 June.

The UN-HABITAT Program was established as a UN body in 1978 as a result of the first Conference on Habitats and Sustainable Urban Development (1st HABITAT Conference) held in Vancouver, Canada, in 1976. The organization is headquartered in Nairobi, Kenya. The Executive Director of the UN-HABITAT is Maimunah Mohd Sharif from Malaysia. Maimunah Mohd Sharif visited Azerbaijan in March 2022 and was received by President of Azerbaijan Ilham Aliyev. During the visit, the executive director visited the liberated city of Aghdam.

A document entitled “New Urban Agenda” was adopted at the 3rd HABITAT conference held in 2016. The main goals of the agenda are to improve the living conditions of people living in slums and provide clean drinking water and sanitation.

With the assistance of donors, UN-HABITAT supports post-conflict reconstruction in a number of countries around the world. Since the end of the conflict in Sri Lanka in 2009, UN-HABITAT has implemented infrastructure projects to restore the destroyed homes of 31,000 families and improve the living conditions of 420,000 IDPs. A similar operation was carried out in Iraq in 2019.

At present, Azerbaijan and UN-HABITAT are holding consultations on conducting an annual conference on urban planning in the country. The first conference is scheduled for the fall of this year in Aghdam.

In addition, negotiations are underway to involve a UN-HABITAT expert in the urban development process in liberated areas.

Azerbaijan recently made a voluntary financial contribution of $1.5 million to the organization.