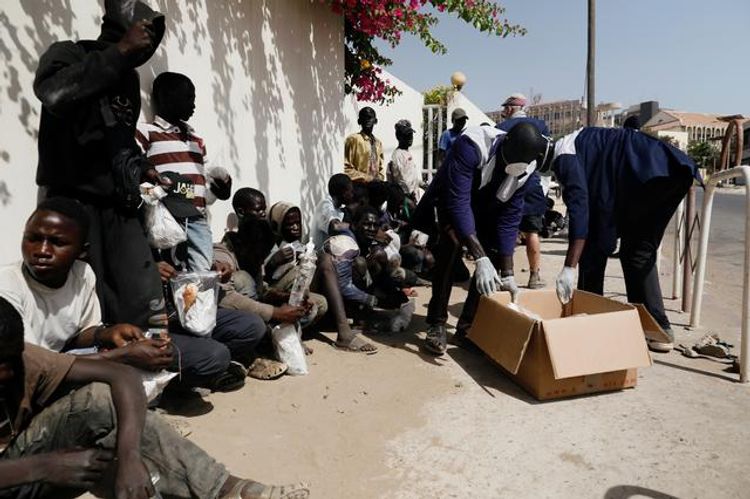 Dozens of children in plastic sandles and shabby clothing rounded a street corner in Senegal’s capital Dakar and sprinted towards a car manned by volunteers bearing sandwiches and water, APA reports citing Reuters.

The daily food distribution is run by Village Pilote, a local charity that has stepped up its efforts to help Dakar’s street children during the coronavirus outbreak.

Life has always been difficult for the children, who have ended up on the street for various reasons. But the expanding outbreak, which has infected 195 people to date, and resulting dusk-to-dawn curfew ordered by the government last month have left the children more vulnerable than ever.

Some have run away from home, others are Koranic school students known as ‘talibes’, who are forced to beg for money and sometimes beaten if they do not come back with enough. There are also those who fled such schools.

Families across Senegal have long enrolled their children in schools called daaras to learn Islamic scripture and build character. Historically, part of that teaching included begging for food to instill humility.

Since the outbreak of the virus, many of the restaurants and bakeries that would offer the children food have closed. Another lifeline, generous pedestrians, are scarcer and often afraid to get close to the children. Stepped-up police patrols to enforce the curfew have forced some children to sleep out of sight under parked cars, activists say.

“The situation is difficult now. There are more police, and there is nothing to eat,” said Alpha Kamara, 19, who had come to the food distribution in Dakar’s Reubeuss neighbourhood.

Village Pilote has been around for nearly 30 years, but it wasn’t until last week that the organisation, which ordinarily shelters and cares for children it removes from the streets, felt compelled to begin daily food distributions.

Faty Diop, who oversees vocational training for the organisation, said street children were also especially vulnerable to the coronavirus because of poor sanitation and medical problems linked to drug use.

“Before the coronavirus arrived in Dakar, we had noticed there were many cases of tuberculosis in the street,” she said. “People don’t realize that these kids are a ticking time bomb for Senegal.”

The campaign group Human Rights Watch estimated last year that 100,000 talibes across the country are forced by their teachers to beg.

The government says it is intervening to take children off the streets and prosecute those who force them to beg, but rights activists say authorities have not done enough to address the problem.