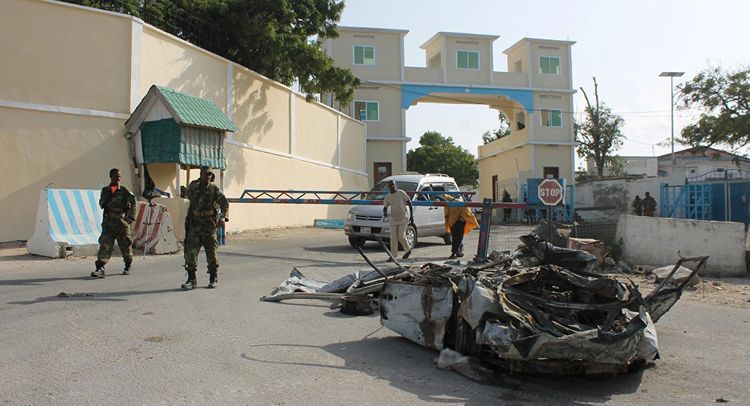 At least four people were killed and six others were injured in an attack by militants on a hotel in the Somalian capital of Mogadishu on Tuesday evening, Xinhua news agency reported, citing a police source.

The militants of the Al-Shabab radical group claimed responsibility for the attack.

"We heard the sound of fire and when we came, we learned five militants broke into the hotel but our forces are now fighting them inside the hotel. We can confirm four people were killed in the attack and six others injured, the death toll could rise as many people were inside the hotel including members of parliament", the source said as quoted by the media outlet.

The media outlet said, citing Zakia Hussein, deputy commissioner of the Somali Police Force, that two attackers had been killed outside the hotel, while others continued shooting inside. Over 100 people have been evacuated.

The US military conducted an airstrike in coordination with the government of Somalia and killed a member of the Al-Shabab terror group, US Africa Command (AFRICOM) reported a day earlier, APA rpeorts quoting sputniknews.

The Somali police said that at least five armed men have attacked security forces located outside the presidential palace in an alleged attempt to storm the heavily fortified residential and office complex, AFP reported. Security forces have arrived on the site and repelled the attack, reports say.

"We thought they were police but they started hurling grenades and firing us when they neared and so we exchanged fire at the gate of the hotel", a police officer told Reuters.

According to reports, three attackers have been killed in the gunfire. However, two others have reportedly taken positions at a nearby hotel parking lot.

The report comes amid close US cooperation with the Somali authorities in targeting terrorists. A day earlier, the US military conducted an airstrike and killed a member of the Al-Shabab terror group in the vicinity of Saakow.

Somalia has been engulfed in violence since the eruption of a civil war between clan-based armed groups in the early 1990s. The situation has been further complicated by Al-Shabab militants, who have staged numerous attacks across the country in an attempt to impose a radical version of Sharia law in the nation.