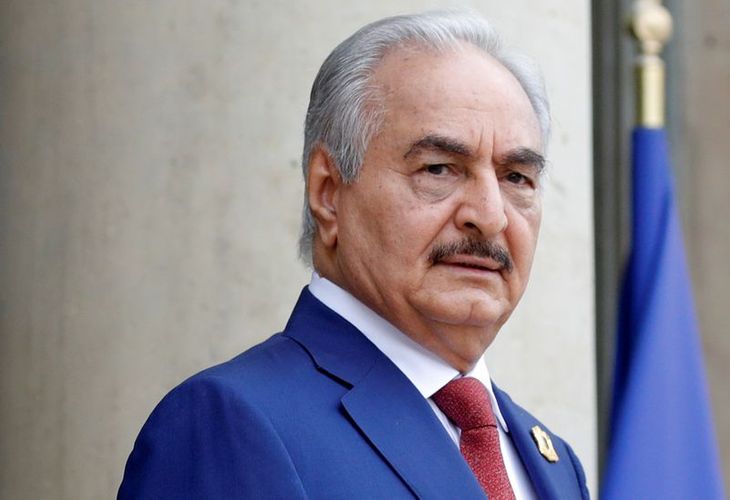 The Libyan National Army (LNA) led by Field Marshal Khalifa Haftar will keep its ground near the capital of Tripoli and does not intend to withdraw its troops, says a statement issued on Monday by the armed forces command, APA reports citing TASS.

"We brim with intent to liberate all of the Libyan land from militias and terrorist groups," the communique reads. "We can assure you that the army forces are keeping their ground in the capital, they did not withdraw and will not back down even by a single step."

The ceasefire proposed by the Russian and Turkish Presidents Vladimir Putin and Recep Tayyip Erdogan as part of a larger initiative to achieve peace in Libya entered into force at midnight on January 12. The ceasefire’s objective is to stop hostilities between the LNA and Fayez al-Sarraj’s Government of National Accord (GNA) sitting in Tripoli. On Monday, Moscow hosted a Russian-Turkish meeting between foreign and defense ministers focusing on settlement in Libya with participation of Haftar and al-Sarraj.

Currently Libya has two parallel bodies of executive power: the internationally recognized GNA and Abdullah Abdurrahman al-Thani’s interim government, operating in the country’s east together with parliament and supported by Haftar’s LNA. After a prolonged standoff that has engulfed the area near Tripoli since April 4, Haftar declared the beginning of a decisive push towards the capital on December 12.

The GNA has repeatedly underlined that only withdrawal of LNA forces to positions they occupied before the April offensive on Tripoli can preserve the ceasefire.