Turkish investments in Senegal to enhance ties with Africa 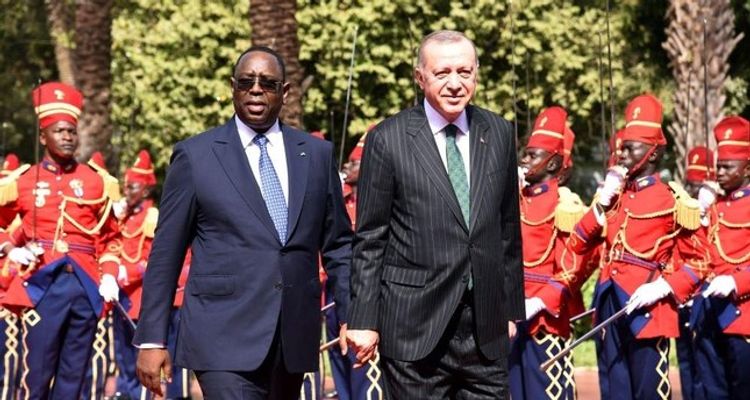 Leading Turkish firms have undertaken significant infrastructure projects to contribute to the economic development of the West African nation of Senegal. These projects will not only further invigorate Turkey's long-standing rapport with Senegal but will also clinch ties with the African continent, President Recep Tayyip Erdoğan remarked Tuesday, APA reports citing Daily Sabah.

In a joint news conference with Senegalese President Macky Sall in Dakar Tuesday, Erdoğan stressed that industrial and infrastructure investments of Turkish firms will continue to support the country's Emerging Senegal Plan which lays out 2025 development goals.

Turkish contractors are set to build an Olympic pool, a stadium with a capacity to host an audience of 50,000 and a hotel for the fourth Summer Youth Olympic Games to be organized in Dakar in 2022. Up until now, 29 projects worth $750 million have been contracted to Turkish firms. Some of these projects have started operating and the rest are still under construction. The Turkish businessmen are expected to take important roles in the construction and mining sectors to expedite the second phase of the Emerging Senegal Plan.

"I believe the projects by Turkish firms such as Tosyalı Holding and Summa will further pave the way for Senegal's development," Erdoğan said, adding: "Together with Senegal, we are building a common future, inspired by a deep-rooted historical bond. Our businessmen are ready to make bigger contributions to the Senegalese economy."

In October 2018, Turkey's Tosyalı Holding sealed a $2 billion iron and steel investment pact with Senegal's Mines and Geology Ministry during a Turkey-Africa Economy and Business Forum.

Turkey's Yapı Merkezi Group was awarded the contract to build a railway project along with France's Eiffage and Senegal's CSE in 2016. The project will put the city center of the capital Dakar just 45 minutes away from the Blaise Diagne International Airport.

The Regional Train Express (known by the French acronym TER) is being developed under a social and economic development plan launched by Senegal's government in 2014. The line is to have 14 stations, with trains traveling at a maximum speed of 160 kilometers per hour and carrying an estimate 115,000 riders daily.

"In 2018, we accomplished our trade goal of $400 million. But last year, the bilateral trade volume fell below the potential. I believe this year, our trade will continue to rise again. We are aiming to reach $1 billion in bilateral trade" the president remarked.

According to the data obtained from the Turkish Statistical Institute (TurkStat), the bilateral trade volume between Turkey and Senegal totaled $402 million. The better part of the trade was composed of Turkish exports to the Western African country with $390 million. In the period of January to November 2019, Turkish exports to Senegal were recorded at $263 million. Turkey's purchases of Senegalese goods and products in the same period were calculated at $9.4 million.

During the bilateral meetings Tuesday, Turkey and Senegal signed seven agreements, Erdoğan noted. The president also stressed that the two countries will expand cooperation in the tourism and defense industries.

Senegal, which gained independence from France in 1960, is surrounded by Mauritania, Mali, Guinea, Guinea Bissau and Gambia. It has a total area of 196,722 square kilometers (75,955 square miles) and is seen as a gateway to West Africa.

Ranking second among French-speaking African countries in terms of industrial development after the Ivory Coast, Senegal has seen an annual growth of more than 6% since 2014. The country has been among Africa's most stable countries, according to the World Bank, with three major peaceful political transitions since its independence in 1960.

In November, Senegal and 13 other African nations made a move to gain financial independence from France and decided to withdraw their currency reserves from the French central bank. The move also comes with the decision to replace the CFA franc, the euro-linked currency used in 14 West and Central African countries, with a new common West African currency, named the eco.

The Senegalese economy was estimated to be worth $24.13 billion in 2018, representing 0.04% of the world economy, according to tradingeconomics.com. Growing 7% in 2018, Senegal is expected to excel further in economic development with added income from hydrocarbon reserves recently discovered in the Atlantic Ocean.

The country's development strategy, called Emerging Senegal Plan, is an ambitious yet feasible path toward becoming an emerging economy. Accelerating and broadening the reforms required by this plan is integral to this vision, according to the International Monetary Fund (IMF).

Turkish institutions, such as the Turkish Maarif Foundation, Turkish International Cooperation and Development Agency (TİKA), Turkish Airlines (THY) and the Yunus Emre Institute, also play an important role in the country's development. The Turkish Maarif Foundation continues educational activities across 13 schools in the country. Fifty Senegalese student are currently studying at Turkish universities, Erdoğan said. THY has eight passenger flights and four cargo flights to Dakar. TİKA opened its first office in Western Africa in Dakar in April 2007.

Turkey-Senegalese Joint Economic Commission (JEC) was established in accordance with the Agreement on Trade and Economic and Technic Cooperation signed in 1992. The first JEC meeting was held in Ankara on Dec. 18-19, 2006, the second in Dakar on April 6, 2010, and the third in Ankara on April 9-11, 2014.

Prior to his visit to Senegal, Erdoğan visited Algeria on Sunday and Gambia on Monday as part of his three-country African tour. With the latest Africa tour, Erdoğan has visited 28 countries on the continent.

Erdoğan's visit to Gambia was of historic importance as it was the first-ever official presidential visit to the country.

The ties between the two countries were established in 1965, when Gambia gained independence from British colonial rule. Yet it took 45 years to open Gambia's diplomatic mission in Ankara. Gambia opened its embassy in Turkey in 2010, while Turkey opened its mission in Banjul in 2011.

Their trade volume is not very high as Turkey had only $45 million in exports to Gambia in 2018, according to the TurkStat data. In 2019, the bilateral trade volume between Turkey and Gambia reached $55 million, with Erdoğan saying that the two countries want to carry out bilateral trade toward a more balanced structure.

Despite the low trade volume, Turkey provides a large extent of Gambia's total electricity needs. In December 2018, Turkey's Karpowership company, the designer and builder of the world's first floating power plants and the global brand of Karadeniz Holding, inked a deal with Gambia's National Water and Electricty Supply Company Ltd. to deploy a Powership of 35 megawatts (MW) for a period of two years. Karadeniz Powership Koray Bey has been in operation in Banjul since April 2018. Karpowership has been supplying up to 60% of Gambia's total electricity needs.

During Erdoğan's visit to Algeria – Turkey's second-largest trade partner in Africa – the two countries expressed commitment to increasing the bilateral trade volume to $5 billion from the current level of around $3.1 billion.

Turkish exports to the country stood at $2.03 billion while imports from Algeria totaled $1.13 billion in 2018, according to TurkStat. In the period of January-November of last year, Algeria's exports to Turkey totaled $655.7 million and its imports from Turkey reached $1.7 billion.

Turkey's investments in the country stand at around $3.5 billion. Through a joint statement signed by Erdoğan and his Algerian counterpart Abdelmadjid Tebboune during the visit, the Turkey-Algeria High-Level Cooperation Council was also established.

Turkey's trade volume with African countries has reached $26 billion, a 381% increase in the last 17 years, as a result of the country's efforts.

Turkey-Africa relations have gained substantial momentum since the declaration of Turkey as a strategic partner of the continent by the African Union in January 2008.

Turkey has embassies in 42 countries and commercial counselors in 26 countries on the Africa continent. Turkey's national flag carrier THY also flies to 35 destinations on the continent.