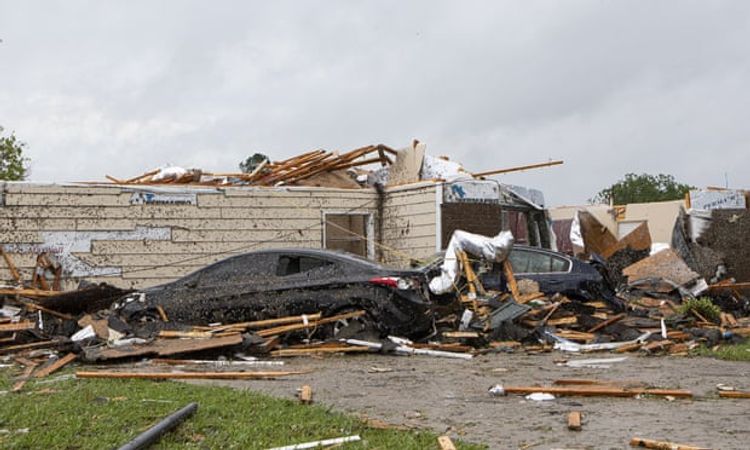 At least 33 people were killed after tornadoes began ripping through the South on Easter Sunday, destroying homes and storefronts and leaving over 1 million people without power from an intense storm system now headed toward the mid-Atlantic, APA reports citing USA Today.

In Tennessee, where three people were killed, police deployed at least 26 teams of officers to check on residents who requested emergency assistance. Seventeen people were treated for injuries, officials said.

Nine people were killed in South Carolina, including five in the small city of Seneca, an emergency management official said. Falling trees felled by powerful winds killed two people across the region — a man in his home in White Hall, Arkansas, and a woman who died in her bedroom in Davidson County, North Carolina, officials said.

Severe weather has swept across the U.S. South, killing at least 18 people and damaging hundreds of homes from Louisiana into the Appalachian Mountains. Many people spent part of the night early Monday sheltering in basements, closets and bathroom tubs as sirens wailed to warn of possible tornadoes, APA reports citing CBC.

The Chattanooga, Tenn., area and several counties in northwest Georgia appeared to be particularly hard-hit as well. At least 14 people were hospitalized in the Chattanooga area, where search and rescue teams from at least 10 fire departments were going door to door responding to more than 300 emergency calls for help, the fire department said.

Fire Chief Dewayne Bain of Murray County, Ga., told WAGA-TV that two mobile home parks were severely damaged, with five people killed and five others hospitalized after a narrow line of storms left an eight-kilometre-long path of destruction. Another person was killed when a tree fell on a home in Cartersville, Ga., the station reported.

In Arkansas, one person was killed when a tree fell on a home in White Hall, about 56 kilometres southeast of Little Rock, the Jefferson County Department of Emergency Management said.

The storms blew onward through the night, causing flooding and mudslides in mountainous areas, and knocking out power for about 750,000 people in a 10-state swathe ranging from Texas to Georgia up to West Virginia, according to poweroutages.us. The National Weather Service tallied hundreds of reports of trees down across the region, including many that punctured roofs and downed power lines.

Several apparent tornadoes spun up in South Carolina, where dozens of homes appeared damaged in a line from Seneca to Clemson. Emergency officials were working to open shelters in the North Carolina mountains, where up to 13 centimetres of rain fell in a few hours.

Mississippi Gov. Tate Reeves declared a state of emergency Sunday night after he said several tornadoes had struck the state.

"This is not how anyone wants to celebrate Easter," Reeves said on Twitter. "As we reflect on the death and resurrection on this Easter Sunday, we have faith that we will all rise together."

A tornado strike destroyed homes and left a trail of devastation across large parts of the US south on Sunday, as forecasters warned that a powerful Easter storm could affect more than a dozen states and millions of people before the early hours of Monday, APA reports citing Guardian.

By Sunday evening, the Mississippi Emergency Management Agency had confirmed at least six fatalities in the state from the severe weather. Mississippi governor Tate Reeves declared a state of emergency after saying several tornadoes had struck the state.

In northern Louisiana, up to 300 homes and other buildings were damaged. Utility companies reported thousands of power outages.

The storm provided a dilemma for public safety officials trying to find a balance between wanting people to stay in lockdown for the coronavirus pandemic and wanting them to leave their homes for shelter if conditions worsened.

The American Meteorological Society, however, was unequivocal in its advice.

“Do not let the virus prevent you from seeking shelter in a tornado,” it said in a statement. “If a public tornado shelter is your best available refuge from severe weather, take steps to ensure you follow CDC [federal] guidelines for physical distancing and disease prevention.”

Community shelters, the meteorological society said, should be a last resort.

The Louisiana twister touched down in the city of Monroe at lunchtime, where officials posted to Twitter images of damage from a number of locations. Buildings and aircraft at the town’s airport were destroyed and managers closed runways to all air traffic.