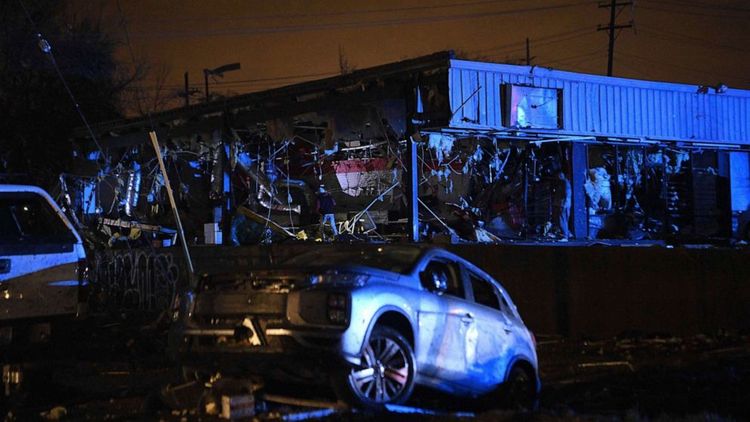 At least nine people have been killed according to the Tennessee Emergency Management Agency - four in Putnam County, two in Nashville, two in Wilson County and one in Benton County - after a devastating tornado ripped through Nashville in the early hours of Tuesday morning with authorities saying many others being injured and multiple businesses and homes flattened, APA reports citing ABC News.

The destruction came amid an outbreak of at least reported five twisters in three states - Tennessee, Missouri and Kentucky - and East Nashville as well as the suburb of Mt. Juliet were hit particularly hard.

Nashville mayor John Cooper is expected to give an update on Metro Nashville’s combined efforts to respond to the severe weather and damage at 8 a.m. local time on Tuesday morning.

A community shelter has been set up in the immediate aftermath of the tornado at the at the Victoria Baptist Church in Mt. Juliet, according to the Mt. Juliet Police Department.

The Nashville Fire Department said that they are currently responding to reports of approximately 40 structures that have collapsed in and around Nashville.

The tornado reportedly stayed on the ground for about 10 miles into Hermitage, Tennessee.

The National Weather Service in Nashville has urged people to get to safety as quickly as possible.

Some of the hardest-hit areas in the storm include Centennial Boulevard and Briley Parkway in West Nashville where there were reports of heavy damage to planes as well as overturned tractor-trailers across the interstates"John C. Tune Airport (JWN), BNA’s sister airport in West Nashville, sustained significant damage due to severe weather earlier this morning," the statement read. There were no reported injuries. Several hangars have been destroyed, and power lines are down. In the interest of safety, the public is advised to avoid John C. Tune until further notice. The Airport Authority has activated its Emergency Operations Center to coordinate the response."

WKRN is also reporting that some Super Tuesday polling stations may also have been impacted by the tornado.

“At this point, information about damage to polling locations is being collected. Any voter in Davidson County whose assigned precinct has been impacted may vote at the Election Commission Offices located at 1417 Murfreesboro Pk or 800 2nd Ave South," according to WKRN.

All metropolitan Nashville schools will be closed on Tuesday due to the tornado..