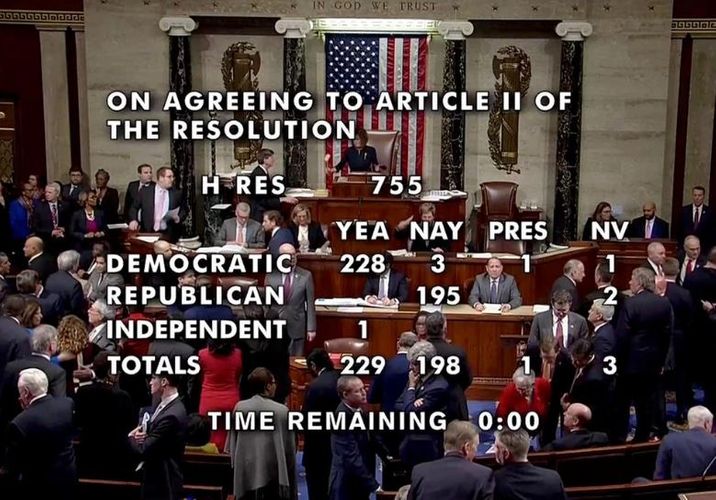 Wednesday’s impeachment vote against President Donald Trump posed a political test for 31 House Democrats who represent districts that backed Trump in the 2016 presidential election, as Republicans warned that those lawmakers could face a backlash if they supported the effort to remove the president from office, APA reports quoting Reuters.

In the end, only three of the 31 voted against one or both of the articles of impeachment that accuse Trump of abuse of power and obstruction of Congress.

Representative Tulsi Gabbard, who represents a safely Democratic district in Hawaii, voted “present” on both charges.

The three who voted “no” said they were not convinced of the case against Trump. The two articles of impeachment allege the president abused his power in dealings with Ukraine and obstructed Congress’ attempts to investigate.

Trump “has not committed a crime,” Representative Collin Peterson of Minnesota, one of the “no” votes, said last Saturday.

Peterson said most people in his rural Minnesota district were not bothered by allegations that Trump withheld funds from Ukraine to push for investigations against a Democratic political opponent because they do not think the United States should provide foreign aid at all, Minnesota Public Radio reported.

Peterson’s district voted for Trump by a whopping 30 percentage points in 2016.

Representative Jeff Van Drew of New Jersey voted no and told reporters after the vote that he will announce in coming days whether he will leave the Democratic Party.

The impeachment vote would boost Trump’s prospects in the 2020 presidential election, he said. “His chances are quite frankly going to be even higher,” Drew told reporters.

Jared Golden an ex-Marine and freshman lawmaker from Maine, voted “yes” on abuse of power and “no” on obstruction of Congress.

Golden’s district voted for Trump by some 10 percentage points in 2016. He said in a statement on Tuesday that Trump had crossed a “clear red line” by asking Ukraine to help him win re-election next year.

“There is no doubt this is an impeachable act,” he said.