Donald Trump: "All our soldiers are safe: No Americans were harmed by Iranian attack" - UPDATED-1 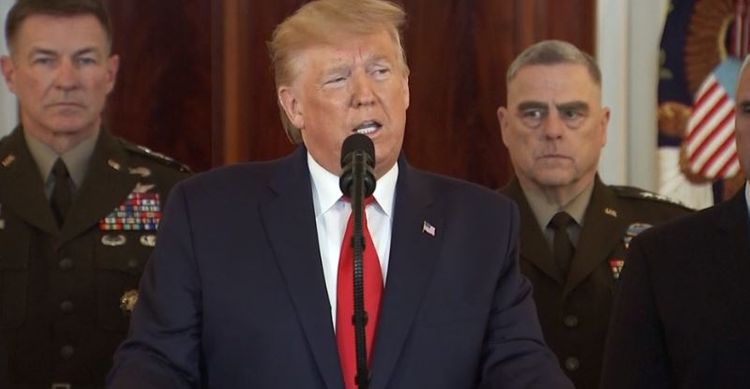 US President Donald Trump says Iran "appears to be standing down" after it targeted air bases housing US forces in Iraq, APA reports.

Mr Trump said no US or Iraqi lives were lost in the attacks, and the bases suffered only minimal damage.

The attacks on the Irbil and Al Asad bases came early on Wednesday morning local time.

Iran said they were a retaliation for the assassination of top Iranian General Qasem Soleimani last week.

The killing in a US drone attack was a major escalation in already deteriorating relations between Iran and the US.

Mr Trump said the US would immediately impose additional financial and economic sanctions on Iran, which would remain until it "changed its behaviour".

The US president has previously threatened military action against Iran if it targeted US personnel and bases, but on this occasion he stopped short of this.

All our soldiers are safe: No Americans were harmed by Iranian attack, US President Donald Trump said while addressing the American people following Tehran's airstrikes on US military facilities, APA reports.

Iran's Islamic Revolutionary Guard Corps earlier targeted two American bases, one in Iraq's Erbil and the other being the Ayn al-Asad Air Base, which houses US and coalition military forces.

The attacks were preceded by the killing of Iranian commander of the IRGC’s Quds Force Qasem Soleimani in a US drone strike.