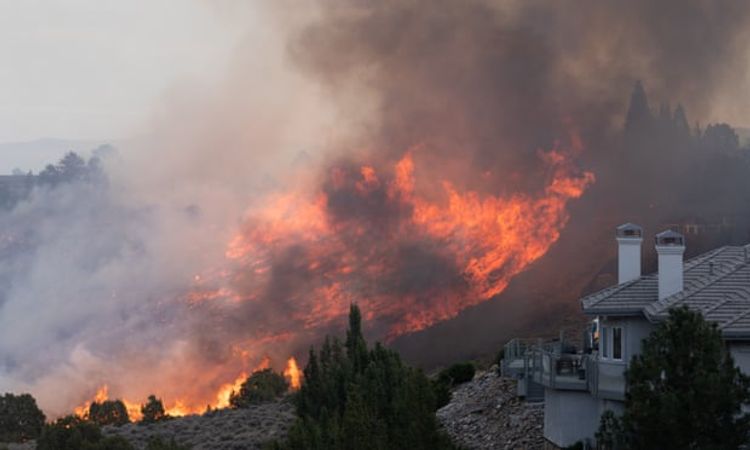 Fresh wildfires in Nevada and California have killed at least one person, injured several firefighters and destroyed dozens of structures.

More than 1,000 people in Reno, Nevada, were forced to evacuate on Tuesday when a wind-whipped wildfire roared through a neighborhood.

Another fire about 100 miles (160 km) south and across the border in California also exploded in strong winds Tuesday, killing one person, driving hundreds from their homes and destroying 80 structures in and around a small community, including some houses.

Evacuees in both states began to return home on Wednesday. And while rains overnight helped tamp down the flames in both places, crews in Reno feared a forecast that called for another lashing of strong winds that could revive the fire, which damaged 15 other structures on the edge of the Sierra Nevada foothills.

“We’re looking at 40 mph (64 km/h) winds in the valleys again today, 70 mph (112 km/h) over the ridgetops, so that will be a concern for us,” said Mark Winkelman, fire department incident commander.

Two firefighters were injured while battling the blaze over 2 sq miles (5 sq km) but have been treated and released. One suffered an allergic reaction, and the other injured a leg while helping evacuate 1,300 residents.

“Even though there was literally snow on the ground in some areas, a wind-driven fire like that is almost impossible to stop,” Cochran said.

Nevada is experiencing drought, with much of the state in extreme drought, and it’s moved in and out of such dry conditions for years. Numerous studies have linked bigger wildfires in America to climate change from the burning of coal, oil and gas, which has made parts of the US west much drier and more flammable.

Investigators from the state and Reno fire marshal’s office, as well as the utility NV Energy, were trying to find the cause of the fire.

Winkelman said it started about 200 yards (183 meters) from the origin point of a November 2011 fire that destroyed 27 homes. That blaze was ignited by arcing power lines at a substation in strong winds, he said.

The so-called Caughlin Fire in 2011 was one of the first in the area to make it clear that dangerous wildfires no longer were confined to hot, dry summer months, said Cochran, the fire chief. “That was sort of a watershed mark nine years ago where we realized there is no fire season. Fire season is year-round,” he said.

On Tuesday, the wind made it impossible to send up aircraft to help fight the flames, with support from local and federal agencies in northern Nevada and neighboring California critical before wet weather moved in later, authorities said.

Reno Mayor Hillary Schieve, who said her own evacuation was complicated because she’s under a Covid-19 quarantine, said the fierce firefighting effort helped avert a much bigger disaster.

“These fires are a huge reminder how things can change so quickly on a moment’s notice,” Schieve said. “We did have a lot of hands on deck.”

She was isolating because she was in contact with Nevada governor Steve Sisolak, who recently announced he had tested positive for the virus and on Tuesday declared a state of emergency over the fire.

The other blaze, across the border in California’s remote Mono county, exploded to more than 45 sq miles (117 sq km) Tuesday, burning into the tiny community of Walker. Rain and snow slowed its growth Wednesday, according to the US Bureau of Land Management.

One person died, but authorities offered no details. While about 800 residents remained under evacuation orders, a highway reopened. The cause of the fire wasn’t yet known, and the land agency said officials were still assessing the damage.

Mono county sheriff’s spokeswoman Sarah Roberts said an unknown number of homes were among the losses from the wind-driven fire.