Mark Esper: US has legal authority to attack Iranian soil 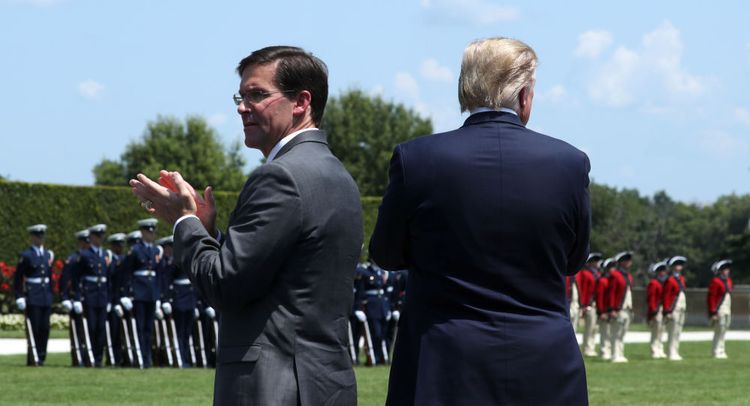 The United States has the legal and constitutional authority to continue attacking ‘Iranian proxies’, in Iraq or even on Iran’s home soil, in response to attacks against US troops, Defence Secretary Mark Esper has said, APA reports citing Sputnik.

“We hold Iran responsible for its proxies, and we will retain the right to exercise self-defence and take action where legally available and appropriate to hold those proxies accountable for their actions,” the Pentagon chief said.

According to Esper, President Trump is entitled to attack Iran under Article 2 of the US Constitution, which gives the president the power to unilaterally engage in military actions in the event of an ‘attack upon the United States, its territories or possessions, or its armed forces.” The president’s rights are also backed up by the Authorization for Use of Millitary Force (AUMF), the legal measure passed by Congress in 2001 following the September 11 terrorist attacks, Esper suggested. The latter document has been renewed annually for nearly two decades, and used to justify US wars and military deployments around the globe, from Afghanistan and Iraq to the Philippines, Georgia, Yemen, Djibouti, Kenya, Ethiopia, Somalia and Eritrea.

Esper also again defended the Trump administration’s decision to target General Soleimani, saying the Iranian commander became a “compelling target to take out” because “there was complete agreement based on what he had done and what he was planning to do.” Soleimani, Esper claimed, had “the blood of hundreds of American soldiers and Marines on his hands.”

The latter assertion, including the claim that Iran provided Iraqi militias with arms to attack the US after the 2003 invasion, remains questionable. However, there is substantive and documented evidence to suggest that Soleimani actually indirectly assisted US efforts against Osama bin Laden and al-Qaeda in Afghanistan and by targeting Wahhabi terrorists in the campaigns against ISIS in Iraq and Syria.