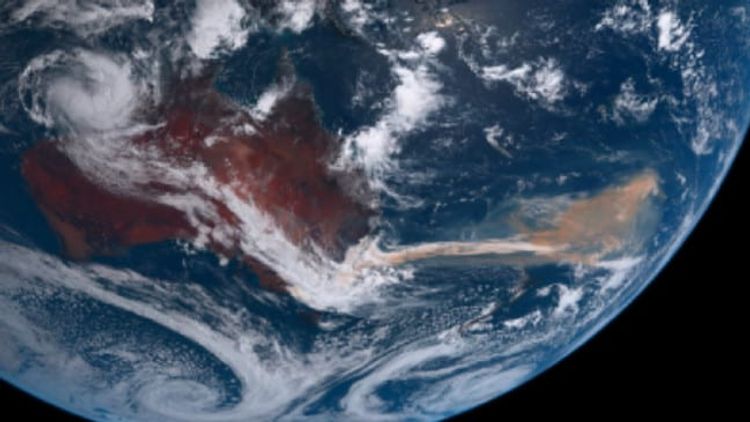 Bushfire smoke has moved from New Zealand and made its way across the Pacific and into the Latin American country of Chile, APA reports citing Sky News.

Satellite images show the huge plume of smoke blanketing the Pacific after wind trajectories from the southeast pushed it over to New Zealand.

For days, westerly winds have carried the smoke across the ditch.

Sky News Weather channel meteorologist Alison Osborne said you could now observe the smoke moving across the Pacific and into Chile.

New Zealand police have been flooded with calls about eerie orange and yellow-tinted skies in Auckland.

Police told the NZ Herald the calls were either to report the haze is present or to ask why the sky has changed colour.

In a statement, the police said they were aware the conditions might be concerning, but listed the proper reasons the number should be called.

Images from NASA show the smoke has created a cloud bigger than the area of the United States.

The photos taken by the SuomiNPP satellite on New Year’s Day showed the massive cloud before it had expanded even further.

The smoke turned glaciers in New Zealand brown after being exposed to the smoke, dust and ash which drifted from across the ditch.

Rey, an Australian woman living in Wellington, took photographs of the “caramelised snow” caused by the dust near the Franz Josef Glacier on the South Island.

The assistance will include personnel and three NZ air force helicopters.

The contingent will deploy to Royal Australian Air Force Base Edinburgh, in Adelaide, and will remain in Australia at least until the end of January, Mr Mark said.

After a “horrendous” weekend of bushfires on NSW’s south coast, the Southern Highlands and the Snowy Mountains, there are still 136 fires burning in the state.

Thousands of Diggers will descend on bushfire-ravaged towns today as hundreds of people are expected to find out their homes have been destroyed.