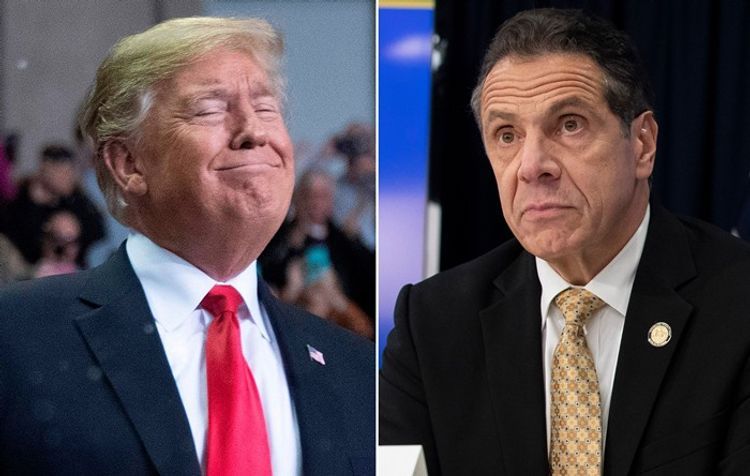 New York Gov. Andrew Cuomo and President Trump clashed Friday after Cuomo demanded the president provide the funding necessary for the state to reopen the economy amid the coronavirus ciris, warning not to "pass the buck without passing the bucks."

The battle of the New Yorkers started Friday when Cuomo, during his press conference, complained about funding while discussing the president’s set of guidelines titled "Opening up America Again,” which passes the decision on when to move to each phase to governors and local officials.

He added: “Don’t pass the buck without passing the bucks.”

Cuomo noted that more federal funding is needed for hospitals as his state grapples with its status as the epicenter of the COVID-19 pandemic in the United States.

The president fired back on Twitter minutes later, slamming the governor for "complaining."

"Governor Cuomo should spend more time 'doing' and less time 'complaining'. Get out there and get the job done. Stop talking!" Trump tweeted Friday touting his administration's efforts in New York.

"We built you thousands of hospital beds that you didn’t need or use, gave large numbers of Ventilators that you should have had, and helped you with testing that you should be doing," Trump continued. "We have given New York far more money, help and equipment than any other state, by far, and these great men and women who did the job never hear you say thanks. Your numbers are not good."

Cuomo, minutes after the president tweeted, rebutted, warning him to “keep emotions and politics out of this.”

The governor went on to defend himself, saying that he has “applauded” the president’s response in New York, while also noting that the additional hospitals which were set up with help from the federal government were used.

“We didn’t use 2,500 beds because we didn’t reach capacity,” Cuomo said. “If he didn’t believe beds were necessary, he wouldn’t have built them.”

Cuomo added that the projections of how many hospital beds the state would need came directly from the Trump administration.

He added that a better argument would be that “we built the beds because projections said it could get that bad, but we worked together and flattened the curve.”

“Don’t suggest anyone made a mistake relying on your projections,” Cuomo said.

He added: “How many times do you want me to say thank you? This was your role as president. Thank you for doing your job in helping build Javits and sending Comfort.”

Cuomo was referring to the hospital set up in the Javits Center in New York City and the arrival of U.S. Navy Ship Comfort to the New York City harbor last month to serve as additional hospital capacity amid the coronavirus crisis.

He added: “If you don’t agree with your projection, fire the head of the CDC and the White House coronavirus task force.”

And again, the president fired back.

"Cuomo ridiculously wanted “40 thousand Ventilators”. We gave him a small fraction of that number, and it was plenty. State should have had them in stockpile!" Trump tweeted.