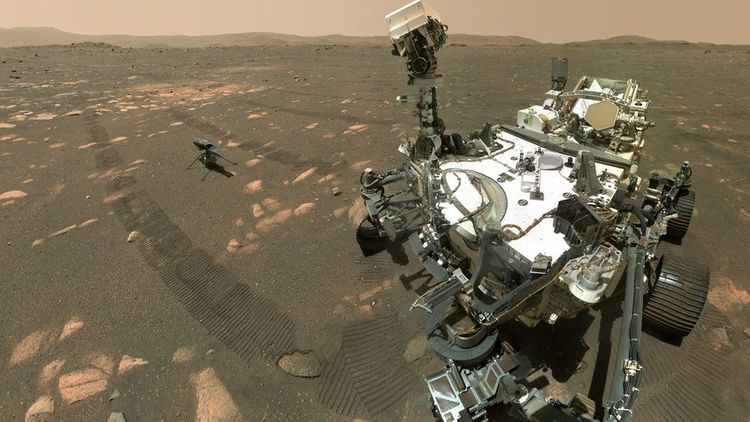 An instrument on Nasa's Perseverance rover on Mars has made oxygen from the planet's carbon dioxide atmosphere, APA reports citing BBC.

It's the second successful technology demonstration on the mission, which flew a mini-helicopter on Monday.

The oxygen generation was performed by a toaster-sized unit in the rover called Moxie - the Mars Oxygen In-Situ Resource Utilization Experiment.

It made 5 grams of the gas - equivalent to what an astronaut at Mars would need to breathe for roughly 10 minutes.

Nasa's thinking is that future human missions would take scaled-up versions of Moxie with them to the Red Planet rather than try to carry from Earth all the oxygen needed to sustain them.

Oxygen (O₂) is also an integral part of the chemistry that propels a rocket. Thrust is achieved by burning a fuel in the presence of an oxidiser, which could be simple oxygen.

Mars' atmosphere is dominated by carbon dioxide (CO₂) at a concentration of 96%. Oxygen is only 0.13%, compared with 21% in Earth's atmosphere.

Moxie is able to strip oxygen atoms from CO₂ molecules, which are made up of one carbon atom and two oxygen atoms. The waste product is carbon monoxide, which is vented to the Martian atmosphere.

TheNasa team behind Moxie is running the unit in different modes to discover how well it works.

The expectation is that it can produce up to 10 grams of O₂ per hour.

“Moxie isn’t just the first instrument to produce oxygen on another world, it’s the first technology of its kind that will help future missions 'live off the land', using elements of another world’s environment, also known as in-situ resource utilisation,” said Trudy Kortes, director of technology demonstrations within Nasa’s Space Technology Mission Directorate.

"It’s taking regolith, the substance you find on the ground, and putting it through a processing plant, making it into a large structure, or taking carbon dioxide – the bulk of the atmosphere – and converting it into oxygen. This process allows us to convert these abundant materials into useable things: propellant, breathable air, or, combined with hydrogen, water."

Nasa will attempt to fly its Ingenuity helicopter again on Thursday.

The mini-chopper made history this week by performing the first powered, controlled flight by an aircraft on another world.

For its second sortie, the drone will raise itself to 5m above the ground, move sideways by 2m, swivel and take some pictures, before reversing back to the take-off spot to land.