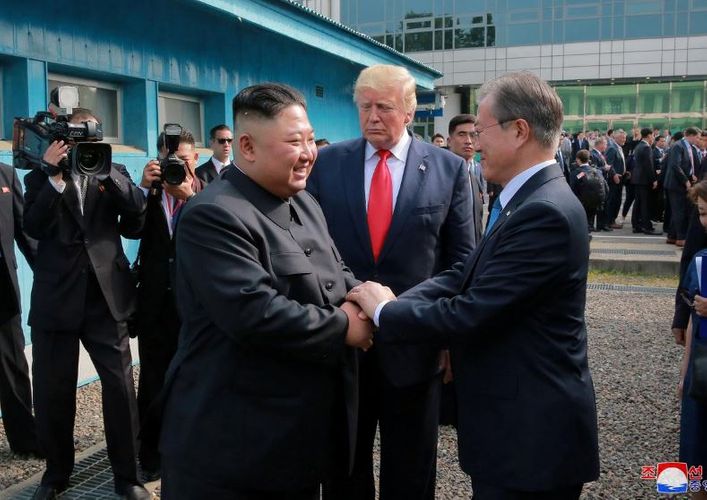 South Korean President Moon Jae-in said on Tuesday it was too early to be pessimistic about stalled decentralization dialogue between the United States and North Korea, adding that Pyongyang has not yet shut the door to more talks, APA reports quoting Reuters.

“Some were concerned about a new round of provocations just in time for Chairman Kim’s birthday,” Moon said. “Instead, President Trump sent him birthday wishes to stress his willingness to talk. It was a great idea.”

On Friday, a South Korean official said Trump had asked the South Koreans to pass on birthday greetings to North Korea.

Over the weekend, however, North Korea released a statement saying it had already directly received a letter from Trump and ridiculed South Korea for trying to “meddle” in U.S.-North Korea relations.

In that statement, a North Korean foreign ministry official said that although Kim likes Trump personally, he would not make policy based on his personal feelings.

“North Korea made clear that the door to dialogue is not closed by saying they will come back to talks only when their demands are accepted,” Moon said of that North Korean response.

“The U.S.-N.Korea talks are not active right now, but I would say both leaders - President Trump and Chairman Kim - continue to trust one another and continue with their efforts.”

South Korea has been increasingly sidelined as decentralization talks between the United States and North Korea have stalled.

In his New Year’s speech on Jan. 7, Moon said there was a “desperate need” for ways to improve ties with North Korea.

Rising tensions and international sanctions have blocked many of Moon’s proposals for inter-Korean projects, and Pyongyang has spent the past year criticizing Seoul as being beholden to the United States.

White House national security adviser Robert O’Brien said the United States had reached out to North Korea seeking to resume talks, according to an interview published on Sunday by Axios.