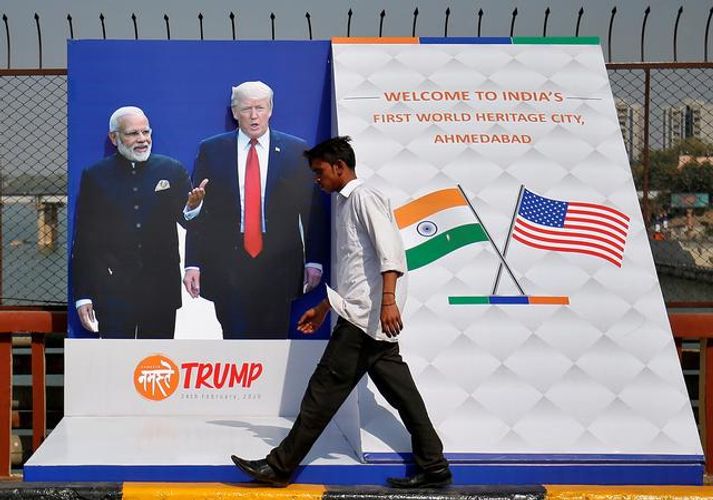 U.S. President Donald Trump departed on Sunday on quick trip to India, where he is to see crowds so large that they will make the much ballyhooed turnout for his campaign rallies pale in comparison, APA reports citing FOX News.

With a travel time of 17 hours, Trump and his wife, Melania, were headed first to Germany for a refueling stop at Ramstein military base before heading on to Ahmedabad, India, which is Indian Prime Minister Narendra Modi’s hometown.

There, hundreds of thousands of people are expected to gather to greet Trump on Monday for a road show leading to a rally in a cricket stadium with a capacity of over 100,000.

Trump routinely gets the biggest crowds of any candidate in the U.S. presidential race, ranging up to 20,000 or so, and he has been grudgingly admiring of Modi’s ability to get a bigger crowd than him.

“Here’s my problem,” Trump told a large crowd of supporters in an arena in Colorado Springs, Colorado, last week. “We have a packed house. We have thousands of people who couldn’t get in. It’s going to look like peanuts from now on.”

It will be a larger version of the “Howdy Modi” rally that they jointly appeared at in Houston to a jubilant crowd of 50,000 Indian Americans last year, where Trump likened Modi to Elvis Presley for his crowd-pulling power.

After addressing the stadium crowd, Trump and his entourage will travel to Agra for a picturesque to visit the Taj Mahal. Then it will be on to New Delhi, where he and Modi are to have a day of talks and attend an evening banquet on Tuesday. The Trumps get back to Washington on Wednesday.

Consumed with trying to win re-election on Nov. 3, Trump’s travel this week will likely be one of his few foreign trips.

After concluding trade deals with China and Canada and Mexico, Trump would like to reach a similar agreement with India to open more markets for American goods, but progress has been slow and Trump in recent days has said such a pact is more likely after the U.S. election.

India and the United States have hit each other with retaliatory tariffs. Over the past month they have engaged in intense negotiations to produce a mini-trade deal, but officials in both countries say it remains elusive.

The two sides have been arguing over U.S. demands for access to India’s huge poultry and dairy markets, Indian price controls on medical devices such as stents and stringent local data storage rules that U.S. technology firms say will raise the costs of doing business.

Modi’s government has sought restoration of trade concessions that Trump withdrew in 2019 and greater access to U.S. markets for its pharmaceutical and farm products.

U.S. officials say Trump will raise the sensitive subject of religious freedom during his meetings.

Modi’s government has faced protests at home and criticism abroad for enacting a citizenship law that is seen as discriminating against Muslims.