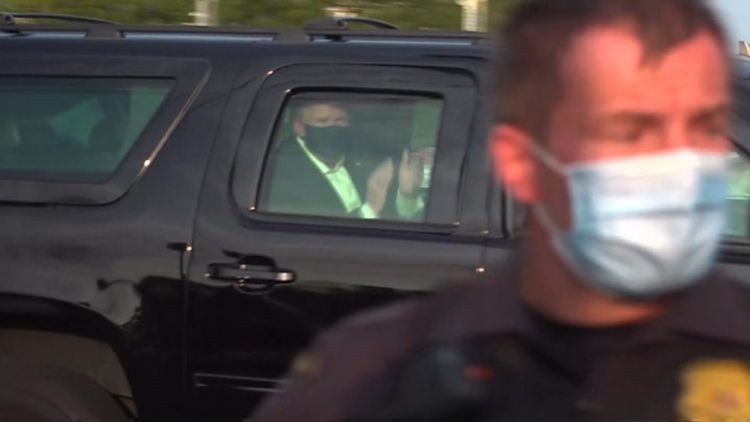 US President Donald Trump remains under scrutiny as he stays in hospital for Covid-19 treatment, APA reports citing BBC.

There is scepticism over the prospect - raised by doctors earlier - that he could leave on Monday as questions continue over the seriousness of his illness.

His oxygen level dipped twice and he received a steroid treatment.

On Sunday, he made a surprise public appearance in a drive-past to greet supporters, drawing criticism.

"More than 205,000 Americans are dead. We need leadership. Not photo ops," tweeted Hakeem Jeffries, chairman of the Democrats in the US House of Representatives.

Wearing a mask, the president waved to well-wishers from behind the glass of a sealed car after tweeting that he would leave Walter Reed hospital to pay a "surprise visit" to "patriots" outside.

Earlier, it emerged that his condition was more serious than previously reported when he went to hospital Friday evening.

The White House had said that Mr Trump was experiencing "mild symptoms" of Covid-19, but it was confirmed at the weekend that he received supplemental oxygen after his levels dipped twice within two days.

He was given the steroid dexamethasone, which is normally reserved for serious cases, according to experts.

However, Mr Trump sought to project an image of strength, tweeting images of himself appearing to work from the hospital and a video message teasing his surprise drive past.