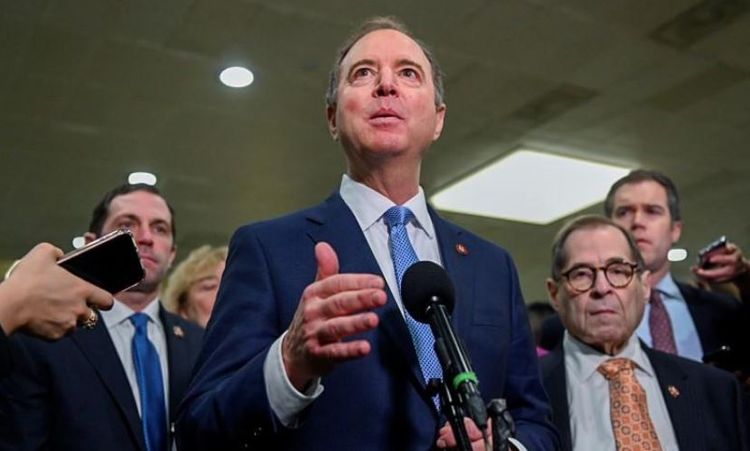 The lawmaker walking U.S. senators methodically through the case for removing President Donald Trump from office is also becoming Exhibit A in efforts by the president’s allies to defend him, APA reports citing Reuters.

Over the first three days of Trump’s impeachment trial, the head of the House of Representatives Intelligence Committee,  Adam Schiff, has led a team of Democratic lawmakers serving as prosecutors as they lay out their evidence that Trump abused his power by pressuring Ukraine to investigate former Vice President Joe Biden, a leading 2020 Democratic presidential contender.

Even a few of Trump’s fellow Republicans have said Schiff has made an effective case.

At the same time, Trump’s lawyers and political allies have made Schiff a central focus of their efforts to defend the president during his trial. When they laid out their written case for why Trump should be acquitted, the president’s lawyers mentioned Schiff’s name almost 100 times.

They accused the congressman of running an “unheard of procedure that denied the president any semblance of fair process,” accused him of lying and of personally orchestrating the whistleblower complaint that led to the impeachment probe.

Congressional Republicans have intensified those critiques since the start of Trump’s trial this week, accusing him of misstating the evidence against the president and running a hasty and unfair investigation.

Trump, who denies wrongdoing and denounces the impeachment process as a sham, joined that criticism on Thursday, calling the congressman “Shifty Schiff” and saying his presentation to the Senate was “loaded with lies and misrepresentations.” Then he retweeted a series of attacks from other Republicans.

A spokesman for Schiff had no immediate comment on the Republican attacks. Schiff has said in response to past salvos from Trump that the president “would much rather attack others than answer for his own conduct.”

Democrats contend that senators should convict Trump on two charges brought by the Democratic-led House - abuse of power for pressuring Ukraine to investigate Biden, and obstruction of Congress for his actions to impede a House inquiry into the matter.

But the Senate, which is controlled by Trump’s fellow Republicans, remains unlikely to convict him. A two-thirds majority is needed to remove him from office.

“It is not common you would personally attack a prosecutor,” said Jessica Levinson, a professor at Loyola Law School in Los Angeles. “But we are not in a courtroom. We are in a political theater - emphasis on theater.”

Standing at a lectern in the well of the Senate, Schiff told the 100 senators acting as jurors in the trial that Trump had tried to “cheat” his way to victory in November’s election, and that he had shown he “believes that he’s above the law and scornful of constraint.”

Schiff, 59, and his fellow Democrats will have one final chance on Friday to make their case before Trump’s legal team takes the floor on Saturday to rebut the evidence.Trump’s team is expected to continue to focus its attacks on Schiff.