Trump impeachment trial set to open in US Senate 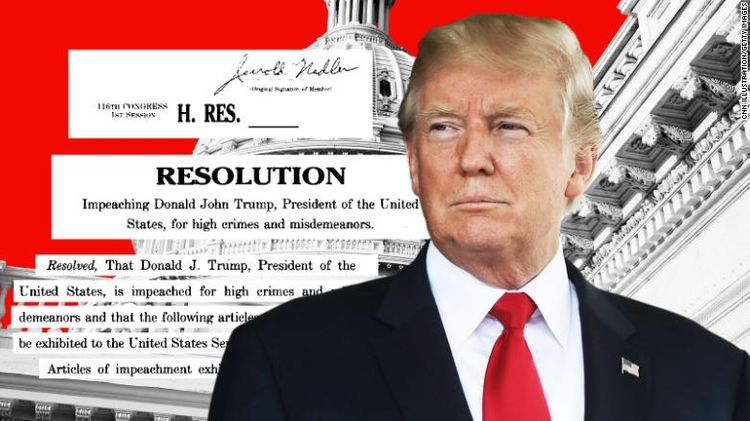 For only the third time in history, an American president is facing an impeachment trial, with hearings set to start on Tuesday at 13:00 (18:00 GMT), APA reports citing BBC.

Such a trial could, in theory, lead to President Donald Trump being removed from office. That outcome would be a huge shock - we'll explain why later - but the very fact a president is facing trial is significant.

Here are seven questions and answers that will help you understand the trial.

Put simply, it's a process that allows senior figures in government to hold other officials (like judges, the president and cabinet members) to account if they're suspected of committing offences while in office.

Those offences can include "treason, bribery or other high crimes and misdemeanours".

After someone is impeached, they then go on trial in the Senate, the members of which will decide whether they are guilty or not. It's a political trial not a criminal one.

2) What is Mr Trump accused of?

Firstly, he's accused of seeking help from Ukraine's government to help himself get re-elected this November. He's alleged to have held back millions of dollars of military aid to Ukraine and dangled a proposed White House meeting with Ukraine's president, both as bargaining chips.

In exchange, witnesses say he wanted Ukraine to publicly announce an investigation into Joe Biden, the man who's leading the Democratic race to challenge him in the election. Polls suggest Mr Biden would beat him if chosen as the Democratic candidate.

Secondly, after the White House refused to allow staff to testify at the first impeachment hearings last year, Democrats accused Mr Trump of obstructing Congress (the part of the US government that writes and brings in laws, and which was investigating him).

Mr Trump has denied any wrongdoing and his legal team say the "flimsy" charges are a "dangerous perversion of the Constitution".

It's worth emphasising that this has nothing to do with the special counsel investigation into Russian interference in the 2016 US election, and into the Trump campaign's ties to Russia. That ended with no further action against Mr Trump himself.

This is what led us to this moment:

August 2019: A whistleblower made allegations against President Trump

October - December: An investigation took place, with hearings in the House of Representatives (controlled by Mr Trump's Democratic rivals)

January 2020: The case was passed up to the Senate (controlled by Mr Trump's Republicans), where the trial will take place

4) What does a Senate trial involve?

The US Constitution is a bit vague when it comes to the specifics of managing impeachment. But there are general rules based largely on the impeachment trial of President Andrew Johnson in 1868. In that case, he just about kept his job.

The only other president to face an impeachment trial was Bill Clinton in 1999. He too survived.

Why only two articles of impeachment?

Two people are deciding how the trial will be conducted: Mitch McConnell, the Republican leader of the Senate, and his Democratic counterpart, Chuck Schumer.

They'll both have to agree guidelines for evidence, witnesses, duration and arguments. But because the Republicans control the Senate, Mr McConnell has the final say over the format of the trial. Senators will vote on the rules of the trial on Tuesday.

A few rules have already been laid out: there is to be no live tweeting from the chamber, and no outside reading material should be brought in. Senators are also not allowed to speak to those sitting near them while the case is being heard.

Senators will hear from both sides - prosecutors from the House of Representatives and lawyers from the White House - as well as from any witnesses. After that, senators will be given a full day to deliberate before they vote on whether to convict Mr Trump.

A two-thirds majority of 67 votes in the 100-seat Senate is required to convict and oust Mr Trump. But because there are only 47 Democrats (and 53 Republicans) in the Senate, the president is widely expected to be cleared.

In the unlikely event of Mr Trump being found guilty, he would be removed from office and Vice-President Mike Pence would be sworn in as president.

A simple majority of senators - 51 - could also vote to end the trial should they wish.

5) Who are the main players?

Each senator, including Mr McConnell, has delivered an oath promising to deliver "impartial justice" during the trial. But Mr McConnell - the most senior Republican in the Senate - last month said "I'm not an impartial juror" and has also said he and his party are working hand-in-hand with the White House.

"Everything I do during this, I'm co-ordinating with the White House counsel," he told Fox News, to the fury of senior Democrats.

He won't be presiding over the trial - that job has gone to Supreme Court Chief Justice John Roberts, although the 100 senators will ultimately act as both judge and jury. Justice Roberts is there to make sure the trial sticks to the predetermined rules.