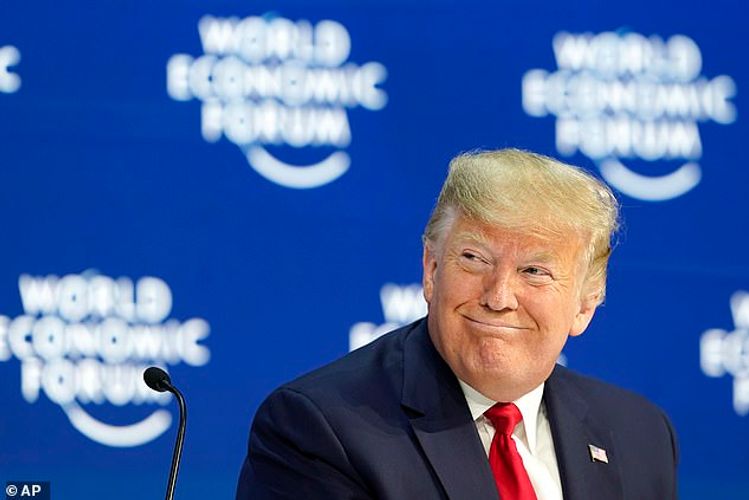 President Donald Trump used a gathering that has historically focused on the importance of international cooperation to instead tout his administration's isolationist trade and economic policies and minimize climate "prophets of doom," as he spoke Tuesday morning from the World Economic Forum's annual gathering in Davos, Switzerland, APA reports citing US News.

Moments after Klaus Schwab, founder and executive chairman of the World Economic Forum, praised Trump's arrival as a sign that the president recognizes "the need for America to maintain a prominent role on the global stage," Trump encouraged other countries to adopt similar isolationist strategies and credited his administration's tariffs with keeping Chinese officials at the negotiating table.

"Before my presidency began, the outlook for many nations looked bleak," Trump said Tuesday, crediting his administration with keeping not only the U.S. but also its global trade partners afloat. "A nation's highest duty is to its own citizens. Honoring this truth is the only way to build faith and confidence in the market system."

The dichotomy between the content of Trump's speech and the themes for the rest of the event were difficult to miss. At a time when others at the World Economic Forum asked for greater global coordination, Trump celebrated tariffs and trade duties that have contributed to one of the most uncertain periods for global trade in recent decades.

"These achievements would not have been possible without the implementation of tariffs, which we had to use. And we're using them on others, too," Trump said Tuesday.

And at a time when greater international focus is being directed toward climate concerns – with activist Greta Thunberg also addressing the World Economic Forum on Tuesday – Trump used his speech to delegitimize concerns in the scientific community that the planet is facing a global environmental crisis, equating those who hold these beliefs with "radical socialists."

"To embrace the possibilities of tomorrow, we must reject the perennial prophets of doom and their predictions of the apocalypse. They are the heirs of yesterday's foolish fortune tellers," Trump said Tuesday. "We will never let radical socialists destroy our economy, wreck our country or eradicate our liberty."

Trump did take the opportunity to announce the U.S. would join its international counterparts in participating in the "1 Trillion Trees Initiative," launched at the World Economic Forum this year to, as the name suggests, plant more trees to help offset the effects of carbon emissions.

But Trump's message to those concerned about the state and trajectory of the world's environment was clear, as he suggested that "fear and doubt is not a good thought process."

The president also used the speech as an opportunity to take a victory lap after a monumental week for American trade relationships. U.S. and Chinese officials last week signed off on a partial trade agreement, and a bipartisan group of senators passed a revised North American trade deal largely negotiated by Trump administration officials, with some concessions granted to House Speaker Nancy Pelosi of California and her Democratic colleagues to help grease the proposal through Capitol Hill.

The rest of the roughly 30 minutes speech in front of world leaders and global business executives focused almost exclusively on economic achievements the U.S. has enjoyed under Trump – declining unemployment, continued job creation, the passage of a GOP-authored tax bill in late 2017 and continued Wall Street success, among other topics.

Familiar punching bags, including former President Barack Obama's administration and the U.S. Federal Reserve, were targeted as stumbling blocks to the economy's success. Trump targeted the Fed, in particular, for not lowering its benchmark interest rate more substantially at a time when a handful of central banks around the world have plunged into negative interest rates to help keep their respective economies afloat.

Trump's remarks were delivered just hours before the Senate will begin in earnest with the president's impeachment trial. When asked about impeachment proceedings by a group of reporters on Tuesday, Trump stuck to script, referring to the process as "a hoax" and "the witch hunt that's been going on for years."