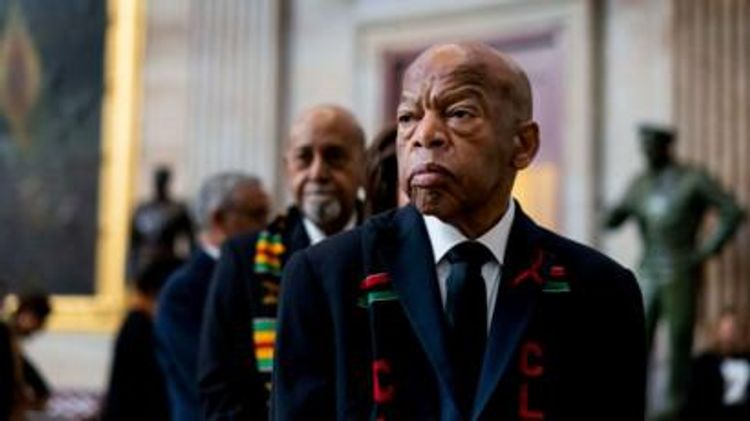 John Lewis, a pioneer of the civil rights movement and long-time member of the U.S. House of Representatives, died on Friday, a passing that prompted tributes from leaders across the political spectrum, APA reports citing Reuters.

A Democratic member of Congress from Atlanta since 1987, Lewis had announced in December that he had advanced pancreatic cancer. He was 80.

Lewis was a protege of the Rev. Martin Luther King Jr., whom he met after writing to him when Lewis was just 18. He was the last surviving speaker from the 1963 March on Washington, having stood beside King when he made his “I Have a Dream” speech.

Tributes to Lewis, who endured numerous beatings and arrests in his lifelong fight against segregation and for racial justice, poured in on Saturday.

President Donald Trump ordered flags to fly at half-staff through the day. “Saddened to hear the news of civil rights hero John Lewis passing,” he wrote on Twitter. “Melania and I send our prayers to he and his family.”

Lewis and Trump tangled in January 2017, shortly before the inauguration, when he said he did not view Trump as a “legitimate” president because of Russian meddling in the 2016 election to boost his candidacy. Trump shot back that Lewis was “all talk” and “no action,” drawing criticism even from fellow Republicans.

Several governors also ordered flags in their states to fly at half-staff, including Republican Brian Kemp in Georgia, Lewis’ home state, who said that Lewis “changed our world in profound and immeasurable ways.”

Lewis kept up the fight for civil rights and human rights until the end of his life.

“He loved this country so much that he risked his life and his blood so that it might live up to its promise,” Barack Obama, the nation’s first Black president, said in a statement. “And through the decades, he not only gave all of himself to the cause of freedom and justice, but inspired generations that followed to try to live up to his example.”

In Alabama, where Lewis was savagely beaten during the “Bloody Sunday” march across the Edmund Pettus Bridge in 1965, he was hailed a “beloved Civil Rights leader” by the current governor, Kay Ivey, successor to segregationist George Wallace who oversaw the police attack.

“He dedicated his life to serving his community and advocating for others,” Ivey said in a statement. “We’ll forever remember his heroism and his enduring legacy.”