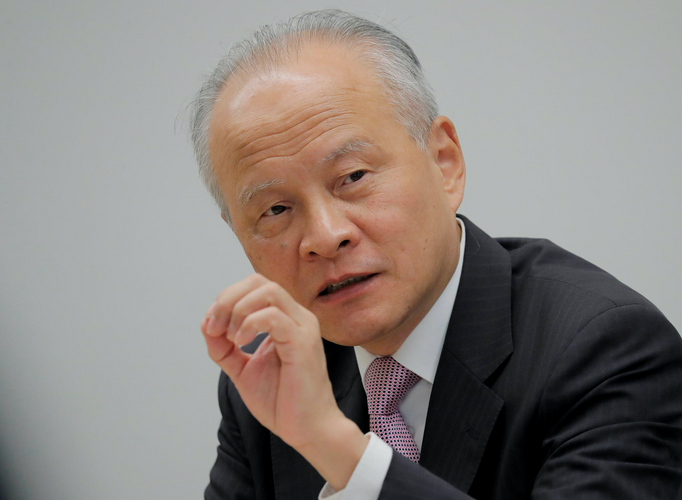 The U.S. State Department on Friday summoned the Chinese ambassador to the United States to protest against comments by a Chinese foreign ministry spokesman who had suggested the U.S. military might have brought the coronavirus to Wuhan, APA reports quoting Reuters.

“He was summoned with regard to what the Chinese foreign ministry spokesman said over COVID-19,” a State Department official said, speaking on condition of anonymity, referring to Cui Tiankai, Beijing’s top diplomat in the United States.

China’s embassy in Washington did not immediately respond to a request for comment.

The episode is the latest in an increasing war of words between Washington and Beijing, whose already strained ties over issues including trade, intellectual property rights and press freedom have further been tested by the outbreak.

The coronavirus, which emerged in China in December, has spread around the world, roiling financial markets, halting industry, bringing some flights to a standstill, closing schools and forcing the postponement of sports events and concerts.

The tensions between the United States and China escalated further after Chinese Foreign Ministry spokesman Zhao Lijian made the accusation on Thursday on his Twitter account.

“When did patient zero begin in US? How many people are infected? What are the names of the hospitals? It might be US army who brought the epidemic to Wuhan. Be transparent! Make public your data! US owe us an explanation!” Zhao tweeted in English.

His comments came days after U.S. National Security Adviser Robert O’Brien said China had reacted slowly to the emergence of the coronavirus, probably costing the world two months when it could have been preparing.

Wuhan was ground zero for the outbreak, which the World Health Organization (WHO) earlier this week described as a pandemic. It has infected more than 127,000 people worldwide, nearly 81,000 of them in mainland China, and killed more than 5,000 people.

Beijing has come under criticism for initially attempting to censor some Chinese doctors who sounded an alarm over the virus in the early days. It has since January imposed draconian containment measures, effectively locking down Hubei province, where Wuhan is based and home to 60 million people.

U.S. Secretary of State Mike Pompeo, who generally takes a tough stance against China, accused Beijing of suppressing information connected with the virus and said the U.S. response to the outbreak had been hindered by what he called imperfect data from the country.

His and several other U.S. politicians’ use of the term “Wuhan virus” has also drew ire from Beijing.