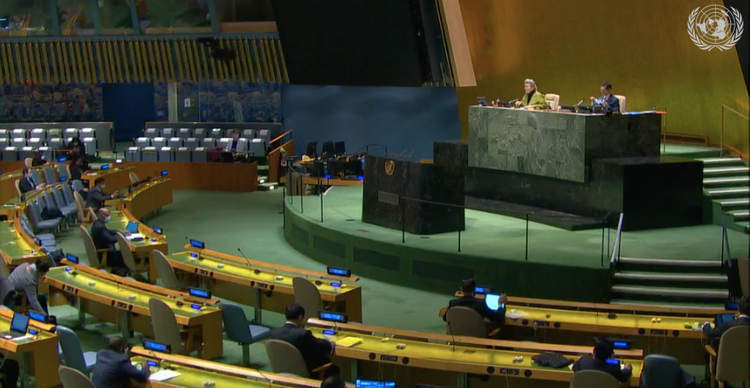 The president of the 75th session of the UN General Assembly (UNGA), Volkan Bozkir, pledged on Tuesday that efforts must be made to make progress on the "Road to Kunming," reaffirming his strong support for boosting biodiversity, APA reports citing Xinhua.

"We must continue to make progress on the 'Road to Kunming' and the goal of a 2020 Framework on Biodiversity," the UNGA president, or the PGA, said in his remarks addressed to the high-level event of Raising Ambition for Nature, organized by the Group of Like-Minded Megadiverse Countries, a group of countries that harbor the majority of Earth's species.

The PGA said that biodiversity is very important and "the plain truth is we have not done enough to protect the environment and we need to do more," while calling for "the most pressing and urgent actions needed now for transformative change."

"Member states clearly expressed support for this in September 2020 at the UN's first Biodiversity Summit and through the Leader's Pledge that was released concurrently. This call has only been emphasized in the period since. We must continue to push for action and utilize the upcoming COP-level summits on climate; biodiversity; and desertification, land degradation and drought to underscore the importance of this issue," said the UNGA president.

"All these areas are interconnected, and we cannot miss the opportunity to tie them together," he added.

The PGA also called for efforts to "utilize the opportunity presented by COVID-19 and the largest socio-economic recovery the world has ever undertaken to strengthen our relationship with the natural world."

"For all its tragedy, COVID has also opened a window of possibility in the public and political spheres and given us the chance to push for transformational change. Let us use this and ensure that our recovery efforts are guided by the goals and targets of the 2030 Agenda, and help protect both 'life on land' and 'life below water,'" he stressed.

"We must undertake broad efforts to raise awareness of this issue. While each of us here is aware of the interconnected nature of these issues, most people have little knowledge of zoonotic diseases, or extinction rates, or of the linkages between climate, desertification, and biodiversity," said the PGA, noting that "this is an oversight that will harm our progress."

"Biodiversity loss and the loss of ecosystems are not merely environmental issues; these losses affect our health, our wealth, and our resilience. Some estimates put the value of ecosystem services at more than 33 trillion U.S. dollars. Clearly, we must move to tackle these issues together, and everyone must understand why," said the UNGA president.

The UN Convention on Biological Diversity said in a March statement that COP15, the biggest biodiversity summit in a decade originally scheduled to take place on Oct. 15-28, 2020 in Kunming, China, had been moved to October this year due to delays related to the coronavirus pandemic.

Countries are expected to reach an agreement over targets to protect the natural world, including proposals to conserve 30 percent of the world's oceans and land by 2030, introduce controls on invasive species and reduce plastics pollution.