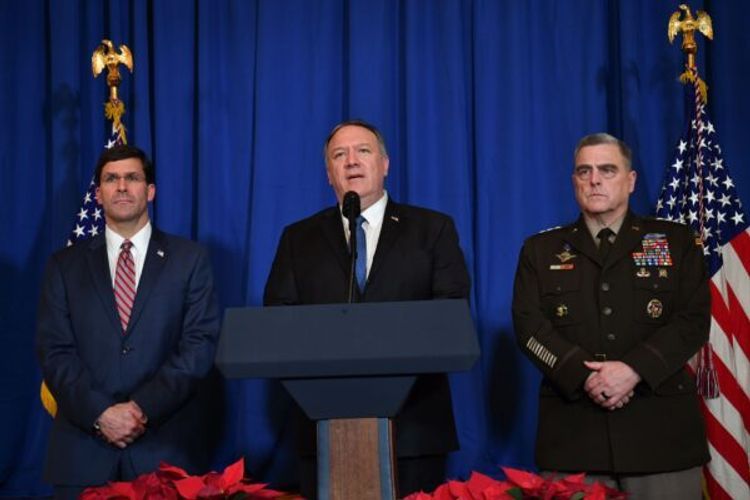 Secretary of Defense Mark Esper has confirmed that “defensive strikes,” including on the headquarters of the Iran-backed Hezbollah Brigades terrorist group, also known as the Kata’ib Hezbollah (Hizbollah), have been “successful", APA reports citing The Epoch Times.

After the operation US Defense Minister Mark Esper and Secretary of State Mike Pompeo have met with the President Donald Trump.

Pompeo told reporters after a briefing with President Donald Trump that the U.S. military may take “additional actions” in the region to defend U.S. interests.

“We will not stand for the Islamic Republic of Iran to take actions that put American men and women in jeopardy,” Pompeo said.

Esper, meanwhile, termed the offensive “successful,” but said that Trump was informed that a further military response could be warranted.

The attacks were launched by F-15 fighter jets, Esper said, adding that all pilots and aircraft have since returned to base safely.

“We discussed with him other options that are available,” Esper said. “I would note also that we will take additional actions as necessary to ensure that we act in our own self-defense and we deter further bad behavior from militia groups or from Iran.”

Esper said that five targets associated with Kata’ib Hezbollah were attacked by the U.S. military, including three targets in Western Iraq and two in Eastern Syria. These targets were “either command and control facilities or weapons caches”, Esper told reporters Sunday evening.

Hoffman said he hopes the the strikes will degrade the group’s ability to carry out future attacks against OIR forces.

At least 25 Kata’ib Hezbollah fighters were killed and at least 55 wounded following the three U.S. air strikes in Iraq, according to Iraqi security and militia sources. At least four local Kata’ib Hezbollah commanders were among the dead, the sources said. The group’s headquarters near the western Qaim district on the border with Syria was hit and destroyed.