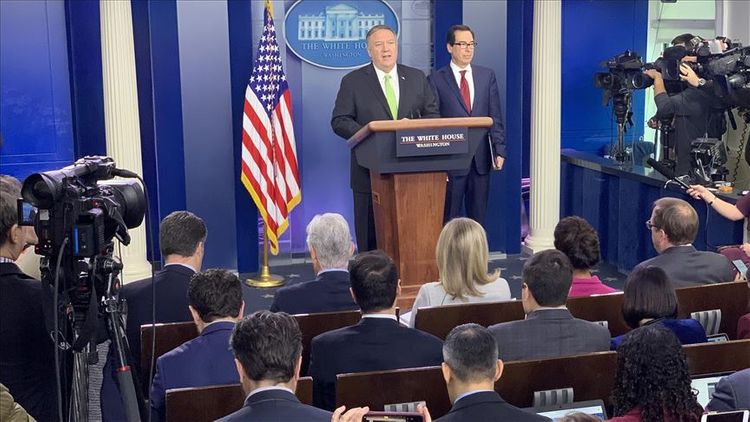 The U.S. on Friday ratcheted up sanctions on Iran to include its manufacturing and construction sectors on a week that tensions between the two countries drew closer to a direct military confrontation, APA reports citing New York Times.

“We’re striking at the heart of the Islamic Republic's inner security apparatus,” said Pompeo. “The goal of our campaign is to deny the regime the resources to conduct its destructive foreign policy. We want Iran to simply behave like a normal nation.”

Mnuchin also described 17 specific sanctions on Iran’s main steel and iron firms, three Seychelles-based entities and a transport ship that he said would effectively “cut off billions of dollars of support to the Iranian regime.”

Targeted sanctions on eight senior Iranian officials would include the secretary of the Supreme National Council and the commander of Iran’s Basij paramilitary forces and others close to Ayatollah Ali Khamenei, said Pompeo, without naming the individuals.

“They've carried out his terrorist plots and destabilizing campaigns across the Middle East and around the world,” Pompeo told reporters.

“They've employed soldiers across the region's battlefields. They've trained militias in Iraq, Syria and elsewhere in the arts of domestic repression. Today, they're accountable for murder and mayhem.”

The sanctions came in a week that has seen long-term foes Iran and the U.S. draw ever-closer to a direct military confrontation than at any time since the 1979 Islamic Revolution saw Iranians jettison their U.S.-aligned Shah.