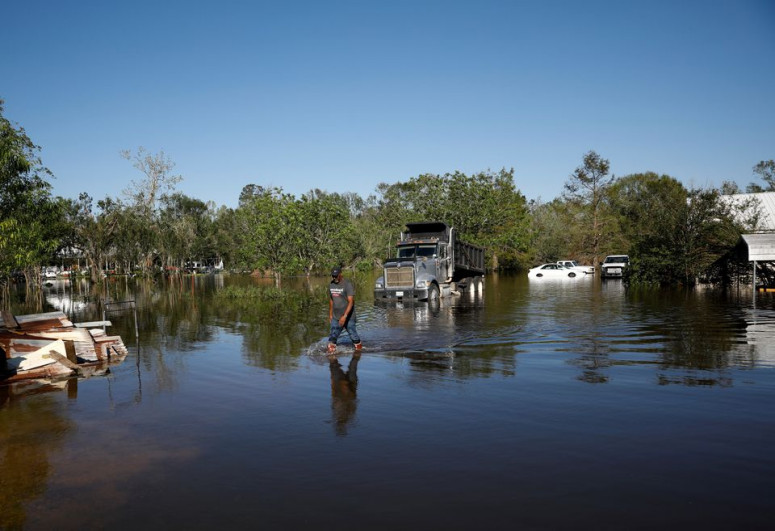 U.S. President Joe Biden said a corporate tax rate between 25% and 28% could help pay for badly needed infrastructure, suggesting he could accept a lower rate than what he has proposed in his search for Republican support for the funding, APA reports citing Reuters.

"The way I can pay for this, is making sure that the largest companies don't pay zero, and reducing the (2017 corporate) tax cut to between 25 and 28" percent, Biden said during a visit to Lake Charles, Louisiana.

In his $2.3 trillion infrastructure plan, the Democratic president initially proposed raising the corporate tax rate from 21% to 28%. Tax experts and congressional aides told Reuters in April that a 25% rate would be a likely compromise.

"What I'm proposing is badly needed" and will be paid for, said Biden, dismissing the "trickle down" theory that helping businesses and the wealthy will benefit those farther down the economic ladder. "We've got to build from the bottom up and the middle out."

Behind Biden as he spoke was the Calcasieu River Bridge, a structure built in 1952, which he said was 20 years past its expiration date. Bumper-to-bumper traffic crawled across it.

"That’s a recipe for disaster," Biden said of the crowded bridge.

Later, he stopped in New Orleans to tour the Sewerage & Water Board's Carrollton Water Plant and discuss the need for spending on water infrastructure.

The U.S. corporate tax rate dropped to 21% from 35% after the 2017 tax cut pushed by then-President Donald Trump and his fellow Republicans, but many big U.S. companies pay much less.

Increasing what companies pay into the more than $4 trillion federal budget is an important part of Biden’s plan to restructure the U.S. economy to reduce inequality and to try to counter China’s rise.

Biden's visit to storm-battered Louisiana, which has backed Republican presidential candidates for the past 20 years, is part of his "Getting America Back on Track Tour" to promote a $2.25 trillion infrastructure spending plan and a $1.8 billion education and childcare proposal.

His push to spend more federal money on schools, roads, job training and other public works, and to tax the wealthiest Americans and companies to pay for it, is popular with voters of both parties. But the plans face stiff opposition from Republican lawmakers.

The White House is betting trips like this will build public support for Biden and his spending proposals, even among Republican voters who backed Trump, who continues to hold enormous sway over his party.

Congressional Republicans oppose Biden’s proposed $2.25 trillion in infrastructure spending over a decade, saying the higher taxes that would be levied on corporations to fund it would cost jobs and slow the economy.

Trump has said increasing taxes on corporations could prompt some to relocate overseas in search of a better tax environment.

The U.S. economy has boomed under higher levels of corporate taxation, such as in the 1960s and the 1990s.

In the closely divided Senate, Biden would need every Democratic vote if no Republicans support the bill. Biden said in Lake Charles he was meeting with Republicans in Congress to see "how much they’re willing to go for, what they think are the priorities, and what compromises" they can offer.

"I’m ready to compromise," Biden said. "I’m not ready to have another period where America has another ‘Infrastructure Month’ and doesn’t change a damn thing."

Some Republicans have offered a far smaller package: $568 billion, focused on roads, bridges, broadband access and drinking water improvements. However, much of that reflects money the federal government is already expected to spend for that infrastructure.

“I’m going to fight them every step of the way, because I think this is the wrong prescription for America,” McConnell said at an event in his home state of Kentucky last month.