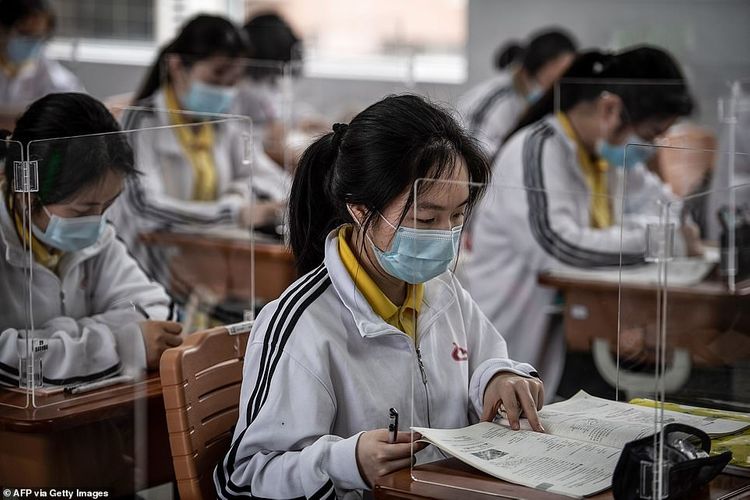 More than 50,000 students in the Chinese city of Wuhan have returned to school more than three months after the provincial capital went into lockdown in the wake of the novel coronavirus outbreak, APA reports citing Daily Mail.

Youngsters in the former epicentre of the pandemic filed back to class on Wednesday, wearing masks and walking in single file past thermal scanners.

School authorities have taken a series of preventative measures to stop the spread of the contagion, including giving out face masks and putting up plastic partitions on desks to shield pupils from other people's saliva.

Senior students in 121 schools were back in front of chalkboards and digital displays for the first time since officials sealed off the city on January 23 to contain the epidemic.

'This is the first time that I'm so happy to go back to school, although I have to sit a monthly examination on the 8th.'

Teenagers sat at individual desks spaced a metre (3.3 feet) apart, seeing their teachers in the flesh after months of distance learning.

Pictures show mask-donning students at the city's No. 23 Middle School attending class behind see-through partitions, each of which guards the youngster in three directions.

These transparent protective units can be folded down, and students are required to carry their partition with them when they go for lunch.

Footage from local Changjiang Daily shows teenagers at the school cleaning their boards during lunchtime before setting them up on their dining table and eating their food behind them.

They must eat in designated 'canteens' converted from classrooms, and no more than 20 pupils are allowed in each room, according to the report.

Wednesday's back-to-school was the latest step in a gradual normalising of life in Wuhan and surrounding Hubei province.

The city, where the coronavirus appeared late last year before spreading around the world, was locked down for 76 days and only reopened last month.

Only the province's oldest students were present on Wednesday -- vocational students and seniors who are due to take the make-or-break university entrance exams.

Return dates have generally not been confirmed for junior and middle school students, although some localities have allowed their return as well.

Officials in Wuhan say students and staff must all have had virus tests before going back to school, and campuses have been disinfected and cleaned.

In preparation for reopening, some schools spaced out their desks and organised smaller class sizes, according to local media.

Thermal scanners greeted everyone walking through school gates, and anyone with a high temperature was barred.

In Wuchang Experimental Middle School, students must wash their hands thoroughly before being allowed to step into their classrooms. The school authority also set up an 'observation room' to keep those whose body temperature was abnormal, reported Xinhua News Agency.

Armed police officers were seen standing guard at the entrance of Wuhan No. 17 Middle School, with officers also pictured outside other schools around the province.

Elsewhere in China, schools that have been closed or online-only since January began gradually reopening last month, with Beijing and Shanghai letting some students return last week.

China's major cities are gradually returning to normal after imposing strict travel restrictions and closing huge swathes of the economy to control the spread of the virus.

In recent months infections nationwide have dwindled, and there have been no new cases reported in Hubei province for over a month.

Over a five-day holiday to start the month, there were 115 million domestic trips, with many tourist sites reopening -- although with limited attendance.

However, most foreigners are still banned from entering the country as China works to contain infections being brought in from overseas.

The country's National Health Commission reported two new infections and no new death on Wednesday. Officials said that both cases were 'imported' and discovered in the province of Shaanxi.

Besides, three more suspected cases, all imported from abroad, were registered in Shanghai, according to a statement from the commission.

As of Tuesday, there were 339 active cases across the country, including 26 patients who were in critical condition, but none of them was in Hubei province, the authority claimed.

The pandemic has killed 4,633 people and infected 82,883 in China, according to Beijing's official figures.