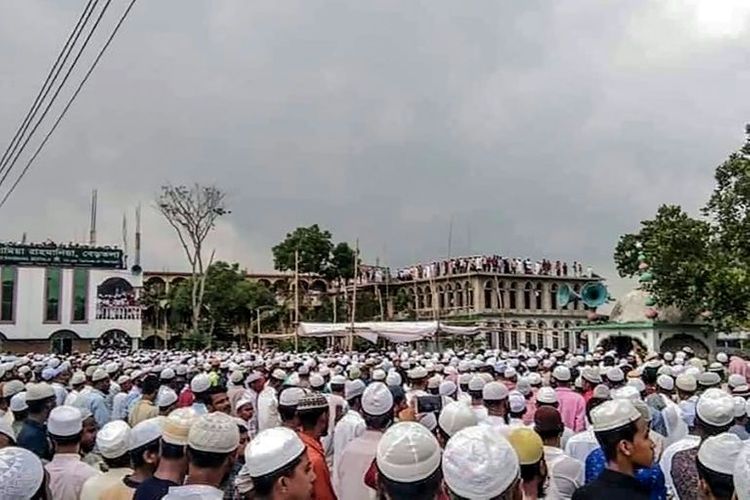 Tens of thousands of people defied government restrictions to attend the funeral of a religious leader in eastern Bangladesh on Saturday, APA reports citing Anadolu.

People from different parts of the country traveled to the eastern Brahmanbaria district for the last rites of Muslim preacher Jubayer Ahmad Ansari, who was also the deputy head of an Islamic political party, the Bangladesh Khelafat Majlish.

Local media, citing residents and police officials, reported that around 100,000 people attended the funeral despite a nationwide coronavirus lockdown.

Despite repeated attempts, Anadolu Agency was unable to reach any top officials of the Bangladesh Khelafat Majlish.

However, an official of a political alliance that includes the party said the turnout at the funeral was testament to Ansari's popularity, and blamed authorities for not being able to prevent the mass gathering.

"He [Ansari] was a renowned religious leader. He was very popular among the people and that is why they were willing to flout government orders to pay their respects," Khalilur Rahman Madani, chief coordinator of an Islamic parties' alliance, told Anadolu Agency.

"The local administration was well aware of his popularity and they should have taken more measures to stop the mass gathering. I hope they learn from this failure and are more alert in future."

"We never thought that such a large number of people would show up at a time when there is a countrywide lockdown. They came from all sides -- even through the fields and other normally unused routes," Tipu said.

"All of this happened within a very short span of time; it was totally out of our control."

The massive gathering has raised fears of a potential spike in COVID-19 transmission in Brahmanbaria district, which has 18 cases and three deaths so far.

The overall count in Bangladesh crossed 2,000 with the death toll nearing 100 on Saturday.

The government said 306 people tested positive for COVID-19 over the past 24 hours, raising the total to 2,144.

After emerging in Wuhan, China last December, the virus has spread to at least 185 countries and regions.

The pandemic has killed nearly 156,000 people, and infected in excess of 2.27 million, while nearly 579,000 patients have recovered, according to figures compiled by the U.S.-based Johns Hopkins University.