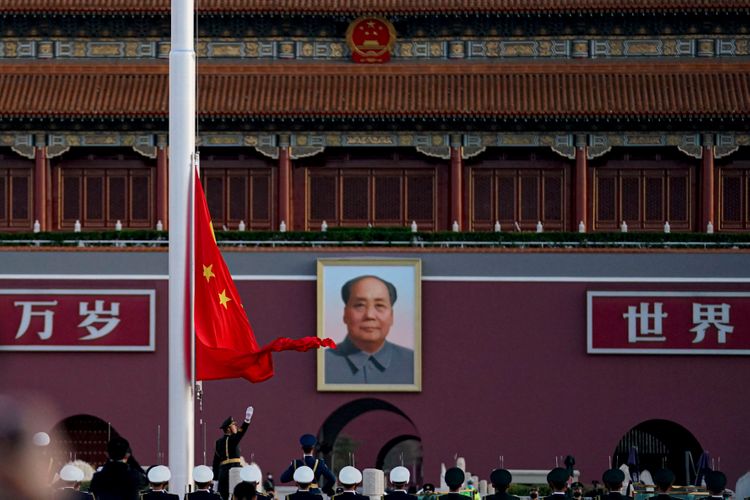 China on Saturday mourned the thousands of “martyrs” who have died in the new coronavirus outbreak, flying the national flag at half mast throughout the country and suspending all forms of entertainment, APA reports citing Reuters.

The day of mourning coincided with the start of the annual Qingming tomb-sweeping festival, when millions of Chinese families pay respects to their ancestors.

At 10 a.m. (0200 GMT) Beijing time, the country observed three minutes of silence to mourn those who died, including frontline medical workers and doctors. Cars, trains and ships sounded their horns and air raid sirens wailed.

In Zhongnanhai, the seat of political power in Beijing, President Xi Jinping and other Chinese leaders paid silent tribute in front of the national flag, with white flowers pinned to their chest as a mark of mourning, state media reported.

More than 3,300 people in mainland China have died in the epidemic, which first surfaced in the central province of Hubei late last year, according to statistics published by the National Health Commission.

In Wuhan, the capital of Hubei province and the epicentre of the outbreak, all traffic lights in urban areas turned red at 10 a.m. and all road traffic ceased for three minutes.

Some 2,567 people have died in the city of 11 million people, accounting for more than 75% of the country’s coronavirus fatalities.

Among those who perished was Li Wenliang, a young doctor reprimanded by police in Wuhan for “spreading rumours” when he tried to raise the alarm about the disease.

Since then, the virus has spread to all corners of the globe, sickening more than a million, killing over 55,000 people and paralysing the world economy.

“Li Wenliang was a hero, he found out about it early...now it’s too late, but now our country is stronger than others,” said Gan Weineng, 78, a Wuhan resident.

Wuhan also banned all tomb-sweeping activities in its cemeteries until at least April 30, curtailing one of the most important dates in the traditional Chinese lunar new year calendar which usually sees millions of families travel to tend to their ancestral graves, offer flowers and burn incense.

They have also told residents, most stuck at home due to lockdown restrictions, to use online streaming services which will allow them to watch cemetery staff carrying out those tasks live.

Some resident burned joss paper, a tradition which they believe sends money and wealth to deceased relatives, on sidewalks and within the confines of their barricaded housing compounds.