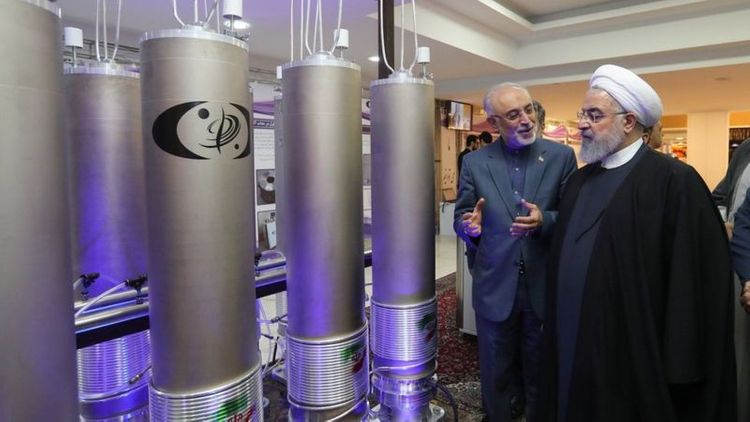 Iran insists its nuclear programme is exclusively for peaceful purposes.

It comes after Iran gave IAEA inspectors access to one of two suspected former nuclear sites.

The agency said it would take samples at the second site later this month.

Last year, Iran began deliberately and publicly reneging on commitments it had made under the international nuclear accord, signed in 2015 by Iran, China, France, Germany, Russia, the UK and the US.

This included the production of more enriched uranium than it was allowed - although only at enrichment levels far below that required for use in atomic weapons.

To manufacture a nuclear weapon, Iran would need to produce 1,050kg of 3.67% enriched uranium, but would then need to further enrich that to 90% or more, according to US-based advocacy group the Arms Control Association.

Low-enriched uranium - which has a concentration of between 3% and 5% of the fissile isotope U-235 - can be used to produce fuel for power plants. Weapons-grade uranium is 90% enriched or more.

Experts say the enrichment process could take a long time, if Tehran chose to do so.

The IAEA had criticised Iran for not answering its questions about possible undeclared nuclear material and nuclear-related activities at the two locations, and denying it access.

In the latest statement, the global watchdog said Iran had "provided agency inspectors access to the location to take environmental samples".

"The samples will be analysed by laboratories that are part of the agency's network," it added.

Iran stopped abiding by a number of commitments last year in retaliation against US sanctions reinstated by President Donald Trump when he abandoned the deal.