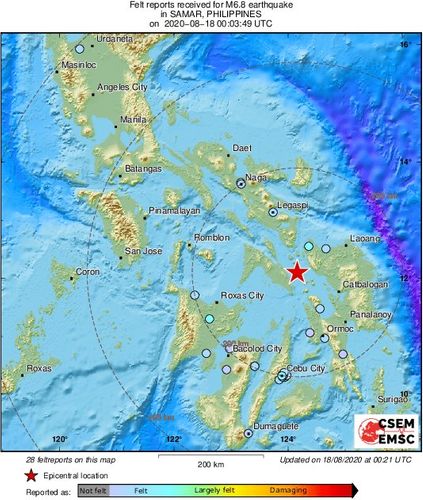 A 6.9 magnitude earthquake struck the central Philippines on Tuesday local time, according to the Indonesian Meteorology, Climatology, and Geophysical Agency (BMKG), APA reports.

The quake occurred in Samar, an island in the Philippines. The earthquake was felt most strongly in Mapanas, Legazpi, Lezo and Aklan. The next strongest intensity level was felt in Iloilo, followed by Roxas City.

​The United States Geological Survey recorded the earthquake as having a 6.7 magnitude.  The European Mediterranean Seismological Centre (EMSC) reported an earthquake of magnitude 6.6.

There are currently no reports of any casualties. A tsunami is not expected.

According to National Geographic, there are 452 volcanoes in the Ring of Fire. Over the past four centuries, Mayon has erupted 51 times and is considered the most turbulent active volcano in the Philippines.