Some students back in classrooms as schools in Turkey partially reopen 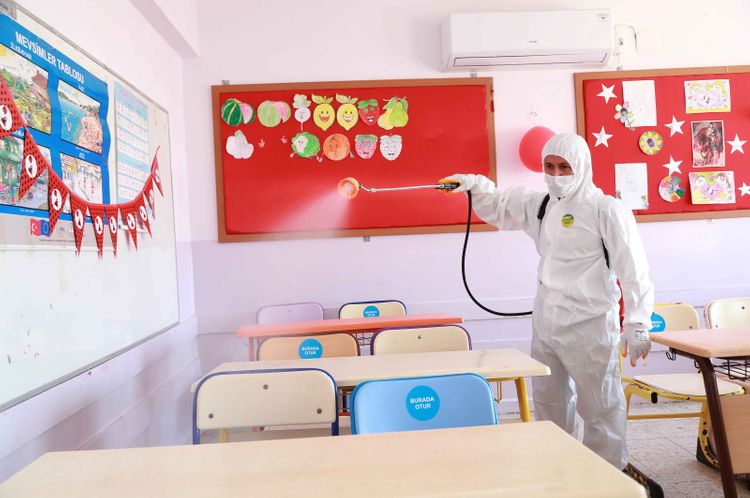 After months of uncertainty amid the coronavirus outbreak, schools across Turkey will partially reopen Monday, with kindergarten and first grade students returning to classrooms for the first time in more than six months, APA reports citing Daily Sabah.

Schools in Turkey were closed on March 16, less than a week after the country confirmed its first coronavirus case, and students had to complete the remainder of the academic year online.

On June 19, the 2019-2020 school year was officially declared over, and millions of students for the first time received their report cards online.

After months of consultations with the Health Ministry and other government agencies, the Education Ministry initially announced that schools would reopen on Aug. 31, with some private schools being allowed to start in-person teaching two weeks earlier.

But a resurgence in COVID-19 cases both in Turkey's high-population cities and rural towns forced the ministry's hand to postpone reopening to Sept. 21 on a reduced scale.

Now, only kindergarten and first grade students will be going back to classrooms for a few days each week, while other students will continue their education online.

Explaining the reasoning behind why only kindergartners and first graders were selected for face-to-face lessons, Education Minister Ziya Selçuk said the decision on first graders was made to help the children familiarize themselves with the concepts of education before thrusting them into the hectic nature of online education.

As for kindergartners, the reasoning was based on their young age as most of the education is done through activities instead of conventional teaching methods, making online platforms less efficient.

While not listed as one of the reasons by MInister Selcuk, the decision was welcomed by parents with young children as they needed the classrooms to open as well.

With students stuck home, parents who still have to go to work have found themselves in need of a relative or a caretaker to look after the children. Others lucky enough to work from home were not spared from inconvenience either, as parents soon found it hard to concentrate with energetic children cooped up all day at home, unable to burn unspent energy.